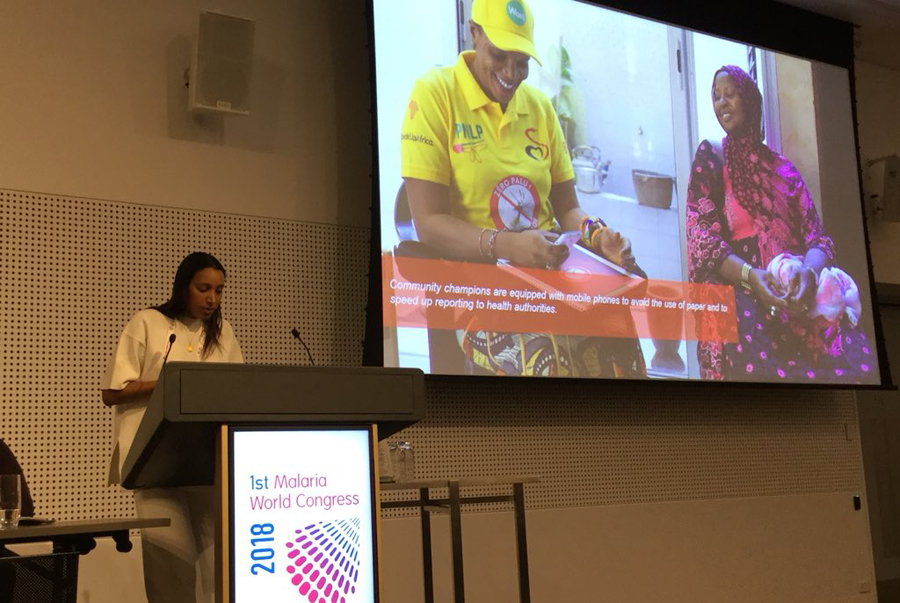 Maelle Ba from Senegal introduces Zero Malaria Starts With Me: a movement for a malaria free Africa – Author's photo from Malaria World Congress

The 1st Malaria World Congress has warned that the ‘fight to eliminate malaria is at a crossroads’. The global ‘declining trend’ has stalled according to the World Health Organisation. Funding has also plateaued:

We're at a crossroads. We neglect #malaria at our peril. Momentum has gained in past months since @JulieBishopMP & @DrTedros shared #CHOGUM stage. @WHO message to @MalariaCongress this week: https://t.co/IDaicEUBQw

Melbourne seemed an unlikely venue to hold this congress. It is a long way from the countries that accounted for most of the estimated 216 million cases and 445,000 deaths globally in 2016.

However, there are real problem areas on Australia’s doorstep such as the Mekong region and Papua New Guinea:

The Hon Julie Bishop MP, Minister for Foreign Affairs, gives a keynote malaria elimination in the Indo-Pacific. Great to see such important support at the 1st ⁦@MalariaCongress⁩ pic.twitter.com/O8mfIwkjjD

However, not everyone was impressed given the cuts in overseas aid by her government during the last five years:

With respect, Australia has many excellent global health & medical researchers and institutions but our gov’t currently punches far below our weight when it comes to funding health (and broader) foreign aid https://t.co/Pmv88gbDjU #MalariaCongress #AustralianAid

There were 1000 participants from 60 countries with diverse backgrounds including: drug and vector researchers and developers; non-government organisations, government agencies and policy planners; academics; private sector companies; and community representatives.

So it was no surprise that a lot of interest was generated on social media. In fact, the organisers had produced a guide, 8 tips for using Twitter, with the help of Inis Communication. They were suitably pleased that the official twitter hashtag #malariacongress trended several times during the five days.

It's not all bad news

There was lots of good eradication news, with prime examples coming from Sri Lanka and the Philippines. Professor Sir Richard Feachem underlined these successes in his address:

There were also positive stories from Africa such as the new campaign Zero Malaria Starts with Me.

Many future challenges were discussed during the gathering. These included: vector [mosquito] control, drug and insecticide resistance, diagnosis and treatment, community engagement, and financing. Professor Feachem looked at five of these and was least confident about vaccine development:

Philip Welkhoff, from the Gates Foundation, brought experience of tackling other diseases:

Fantastic talk from Dr Philip Welkhoff @gatesfoundation this afternoon. ? We need to focus on delivering a tailored mix of targeted interventions. Genetic surveillance gives insight into where, when and how to deploy them @MalariaCongress #MalariaCongress #endmalaria pic.twitter.com/hd2H7q78kL

Shaz Sivanesan listed a variety of factors that she believes need to be addressed:

Malaria, Gender and Human Rights, we need to understand the links. its a disease of poverty. We need to look at social exclusion, language, gender, age, legal status and physical barriers #EndMalaria #MalariaCongress

Scarce funding was a major concern. The economic case for greater investment was strongly argued:

Dr @RimaShretta lays out the global investment case to #EndMalaria: Socioeconomic benefits of US$ 4.1 trillion, offering a 40:1 return on investment and 4.5 million lives saved. Fundamentally a no-brainer! pic.twitter.com/w7JO4isbAg

Headlines we'd love to see one day! @rimashretta‘s presentation on the investment case for malaria elimination and eradication – and how we can make malaria history #MalariaCongress pic.twitter.com/he65YaApnL

Should we make a different kind of case for investing in malaria? Yes
Engage with community and civil society. Educate parliament. Rephrase the argument to speak their language #MalariaCongress

The importance of community engagement was a recurring theme. The role of volunteering was highlighted but this has issues of its own including financing:

Prof Manderson points out that community volunteering efforts to #EndMalaria assumes that time and availability are elastic and falls disproportionately on #women. But this in unsustainable for the women involved, they need financial support. #MalariaCongress @MalariaCongress

The quest for new drugs to treat infected patients remains a high priority. For example, Tafenoquine is being hailed as the latest breakthrough for its cost effectiveness and ease of use:

However, it is one of the drugs at the centre of a controversy concerning drug trials on members of the Australian Defence Force. The Quinoline Veterans and Families Association (QVFA) is a grassroots veteran community group:

Many of the veterans who were given Tafenoquine during drug trials now suffer from serious, chronic illnesses including bipolar disorder, schizophrenia, major depression and anxiety, seizures, hallucinations and psychosis.

QVFA member Stuart McCarthy and others members and supporters tweeted throughout the congress about the issue but received very few responses:

For #MalariaCongress attendees; tafenoquine:
“I believe that if a royal commission was conducted tomorrow it would likely find that the @AustralianArmy drug trials killed or permanently injured more Australian soldiers than the Taliban …”#TafenoquineRC
https://t.co/9IrUU4tpwm

The linked news item in this tweet concerns recent calls for an inquiry from two Federal members of the Australian parliament.

Hidden among all the science and policy were a couple of creative solutions concerning programs on the ground.

Sibo is an educational initiative of the University of Pretoria Institute for Sustainable Malaria Control.

Am struck by how example of mozzie nets being diverted for use in fishing comes up again and again…. curious if anyone has ever trialed distribution of actual fishing nets alongside LLINs as combined livelihoods + malaria prevention strategy?? #genuinequestion #MalariaCongress

A couple of researchers from the co-host Burnet Institute shared their impressions:

The congress concluded with a Statement of Action. Its key priorities are:

If you would like to see more of the 4000 tweets, health journalist Alistair Quaile @aliquaile created a Twitter Moments that brings together some of the highlights.