Natural resources surrounded by terror: What is behind the attacks in northern Mozambique? 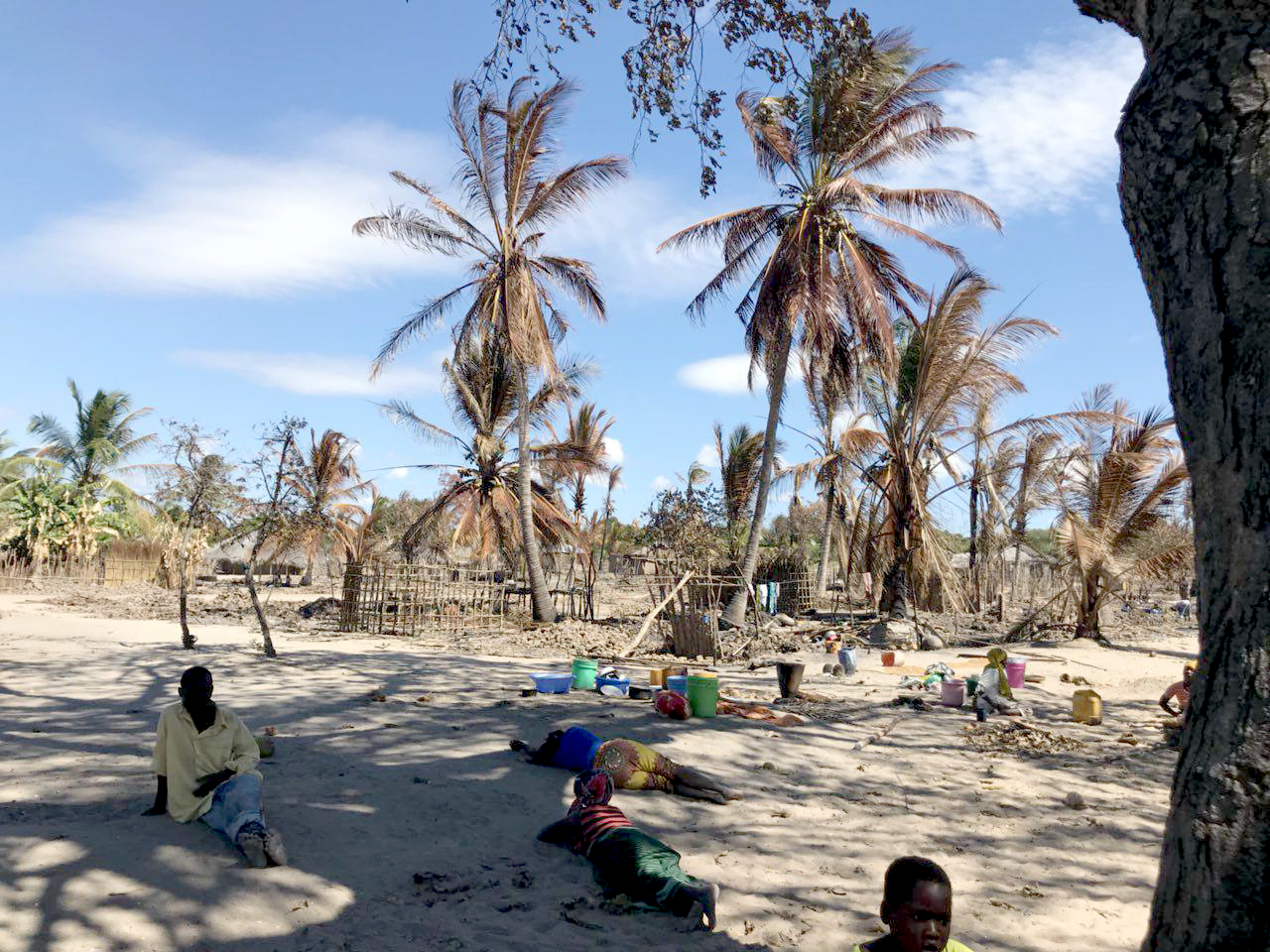 When the Australian company Triton Minerals announced in late 2014 that it had found the world’s largest known graphite deposits in northern Mozambique, the news came as a relief as the country struggles to restructure its external debt. Graphite, a key component in the development of lithium-ion batteries used for electric and hybrid vehicles, has been highly sought after around the world in recent years.

The 115.9 million tonnes of graphite add to the impressive mineral reserves of Mozambique's Cabo Delgado province including 40 percent of the world’s known ruby reserves, discovered in 2009, and gas and oil that, according to government projections, will make the country the third largest exporter of natural gas in the world after Qatar and Australia from 2022.

However, the promise of wealth could be threatened by episodes of extreme violence by armed groups whose motives still remain unclear to local authorities.

The violence started in October 2017 when a group of 30 masked men launched attacks over three days against police posts in Mocímboa da Praia, a city of around 30,000 residents located 100 kilometers south of the border with the United Republic of Tanzania. According to the police, the attack left 16 dead, including 14 from the armed group and two police officers.

This was the first episode in a series of similar attacks suffered in the region over the following months. Since then, 27 attacks have been recorded in the province, leaving at least 95 dead, among officials and civilians, according to research undertaken by local news outlet Zitamar News. Another list of attacks compiled by English-language Wikipedia users using local media reports recorded 103 deaths up to the present.

According to the Zitamar research, 16 of these attacks took place between May and June of 2018 alone in which 650 houses were burned and 62 people killed. While earlier attacks focused on public institutions and commercial establishments, in the last two months there have been mass decapitations using machetes.

Zitamar has been gathering data on these attacks since October 2017 and also created an interactive map with the location and details of each incident.

The violence has caused panic among regional residents, forcing many to abandon their houses and take refuge in neighboring cities. The Quirimbas archipelago has received the highest number of internally displaced persons although the exact number is unknown. According to a report by Agência Lusa, the islands of Ibo and Matemo alone reached 1,500 displaced people in the first half of June 2018.

An attack on June 23 took place only five kilometers from one of the natural gas operations. Although the government says that the attacks are not affecting investments in the province, two oil and gas companies announced the suspension of their activities until the situation is normalized.

The attacks in Cabo Delgado province have prompted strong suspicions of faith-based terrorism. Since the first attack in October 2017, the local population has referred to the armed groups as “Al-Shabaab”, although there is no proven link with the Somali extremist Islamic group.

The majority of Mozambique’s population is Christian, with around 18 percent identifying as Muslim who live predominantly in the northern part of the country.

In fact, none of the attacks have been publicly claimed which has further worried the public and the government. It remains inconclusive as to how these attacks are funded, the types of military training used, and the real interests of the attackers.

One study reveals violence may be rooted in promises of fortune 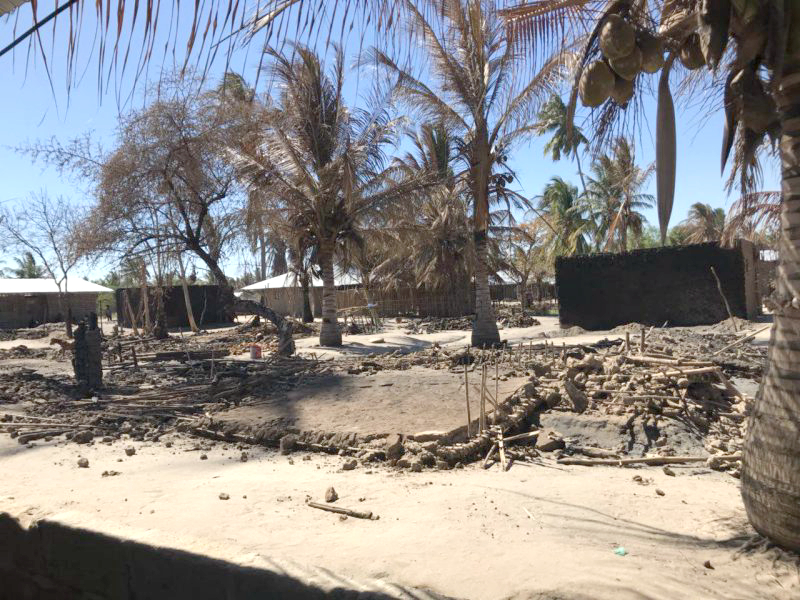 Houses destroyed after an attack on the Naunde village on June 5, Macomia District, Cabo Delgado, Mozambique. Photo by Borges Nhamire. Used with permission.

While local authorities continue to search for motives, a key study published in May 2018 by researchers from the Institute of Social and Economic Studies (IESE) and the Civil Society Support Mechanism Foundation (MASC) provides a few clues. Researchers from the study made three visits to Cabo Delgado between November 2017 and February 2018 and interviewed religious leaders, relatives of youth who had joined the groups, and local authorities, among other relevant actors.

The research claims that the armed groups have origins in Cabo Delgado province with a group initially known as “Ahlu Sunnah Wa-Jamma,” an Arabic term meaning “followers of the prophetic tradition and the [religious] community.” They are known to reject the local communities’ Sufi tradition, a more mystical side of Islam. Sufis tend to be opposed by the scripturalist Muslims, such as the Wahhabi, who accuse them of deviating from the Koran.

But the research also shows that the Mozambican group's objectives are not defined by Islamic fundamentalism.

Ahlu Sunnah Wa-Jamma's membership is reportedly composed of socially marginalized youths who lack formal employment and schooling. While it has religious roots and produces propaganda based on recovering traditional Islamic values, it does not intend to occupy the Cabo Delgado province or create an Islamic state in the region.

Although the exact date of the group's beginnings is unclear, the study notes their incorporation of military cells in 2015. It also reveals that the members were trained by former agents of Mozambique’s police force who were expelled from its ranks for inappropriate behavior and attitudes, and also by militia members from Tanzania and Kenya.

The study suggests that the group's true objective is to create opportunities for trafficking wood, ivory, charcoal, and rubies in the resource-rich province. The researchers explained that the group illegally cuts 50,000 planks of wood per week, at a loss of three million United States Dollars (USD) per week to the government.

Their analysis is supported by accounts from two individuals detained by the police who said they agreed to join Ahlu Sunna Wa-Jammah after receiving promises that they would become millionaires.

There is also speculation that some insurgents had been expelled from the ruby mines of Montepuez in southern Cabo Delgado province, where they conducted illegal mining before the politically-linked Montepuez Ruby Mining Partnership entered the area on a license to operate gained in 2012.

In February 2017, the central government gave orders to security forces to expel all remaining illegal miners from the area. At the time, claims of torture by soldiers were widely reported in local media and triggered a still-unresolved criminal investigation.

Montepuez Ruby Mining Partnership is a joint-venture between by London-based Gemfields, which holds 75 percent of its capital, and the Mozambican Mwiriti Limitada, formed by high-ranking members of FRELIMO, the political party which has governed Mozambique since independence in 1975. Samora Machel Junior, son of the revolutionary and ex-president Samora Machel, is the president of the company’s board. In a single auction in Singapore in 2018, Montepuez’s rubies yielded a record 72 million United States Dollars.

According to the study, the region’s poor socioeconomic conditions, including unemployment and lack of education and healthcare services, have led to increased recruitment with Ahlu Sunna Wa-Jammah. Central government data from 2016 shows that Cabo Delgado province has around 1.8 million inhabitants and 16.2 percent are unemployed, a rate rising to 24 percent among youth between the ages of 15 and 24.

Human Rights Watch researcher Zenaida Machado visited Naunde village after the attack on June 5 and tweeted about what she witnessed:

This woman and hundreds of her neighbors had their homes burned down during a night terrorist attack, in Naunde, northern Mozambican province of Cabo Delgado. She stayed there because she had nowhere else to go. As I tried to chat with her, she kept asking me: “Why, why, why…” pic.twitter.com/pi40Ka6DzW

Vulnerable villages in the region often lack access to electricity and the houses, made from weak materials such as sticks, clay, and straw facilitates the spread of fire. Fleeing women and children were seen carrying their precious objects and small animals.

Faced with fear and uncertainty, the government of Cabo Delgado suspended all nocturnal travel on public transport. The United States, the United Kingdom, and Portugal have released warnings to their citizens against traveling in the province. Neighbouring Malawi stated that it was on alert.