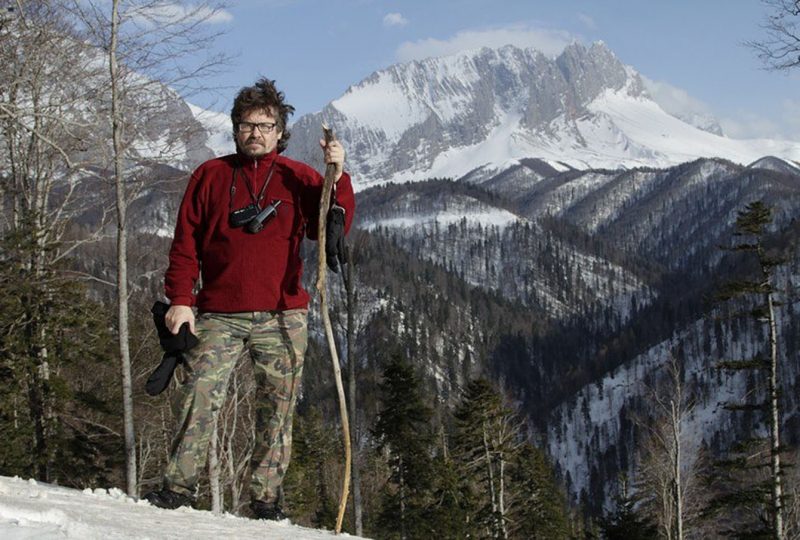 On guard in the mountains: Andrey Rudomakha, chairperson of the Environmental Watch of the North Caucasus. Photo: vk.com/rudomakha

This article is based on a piece originally published on BlueLink, and is republished as part of a partnership with Global Voices. It was first written in Bulgarian by Ksenia Vakhrusheva.

On the evening of 28 December 2017, a group of environmentalists were attacked by three masked men on Russia's Black Sea coast.

When they set out to conduct a public survey of a construction site in the region, they got into an altercation with security workers who demanded that the activists erase their photos of the site. They refused to do so.

Soon after this encounter, they were approached by three masked men along their route. The men violently assaulted two members of the group and attacked the third with pepper spray. They stole equipment, cameras, computers and documents and then fled, leaving one member of the group, Andrey Rudomakha, with a concussion and a broken nose.

Several days later, on 9 January 2018, Rudomakha and his colleague Dmitry Shevchenko received an email from an unknown sender, urging them to leave the country. The email alias was “Death to Rudomakha.”

As of late June 2018, there has been no progress in the official police investigation of the attack, despite multiple clues as to who might have been the assailants.

A photo with a threat sent anonymously to EWNC vice chair Dmitry Shevchenko. The text reads: “Henchmen of Rudomakha go out of the country. You better leave Dmitry…”

The environmentalists are part of Environmental Watch of the North Caucasus (EWNC), a Russian NGO that monitors the environmental effects of construction and industrial projects in the region. While authorities have given no indication of what or whom might have motivated the attack, Rudomakha and his colleagues at EWNC are confident that the attack was a carefully planned retaliation for the group's investigation of an illegal private winery.

Rudomakha’s lawyer, Alexey Avanesyan, also suspects that the attack was intended to prevent the publication of findings from the activists’ inspection. Despite the fact that the cameras were stolen during the attack, they were able to save all photos of the sites and the church.

On their expedition in a state forest (public land), the activists found a winery, still under construction, and what looks like an Orthodox chapel surrounded by a massive fence. Next to the site, the activists came across illegal logging and yet another building site. The forest where these constructions are located is next to two large vineyards.

EWNC’s investigation revealed that these two forest sites are in fact being rented by different companies. The first site was rented by “Perspectiva OOO” for hunting purposes. But according to the law, hunting permits do not allow for the construction of permanent buildings. The owner of “Perspectiva OOO” is Pavel Ezubov, a longtime business partner of Russian oligarch Oleg Deripaska. Ezubov is also the son of the State Duma Deputy from the Krasnodar region. 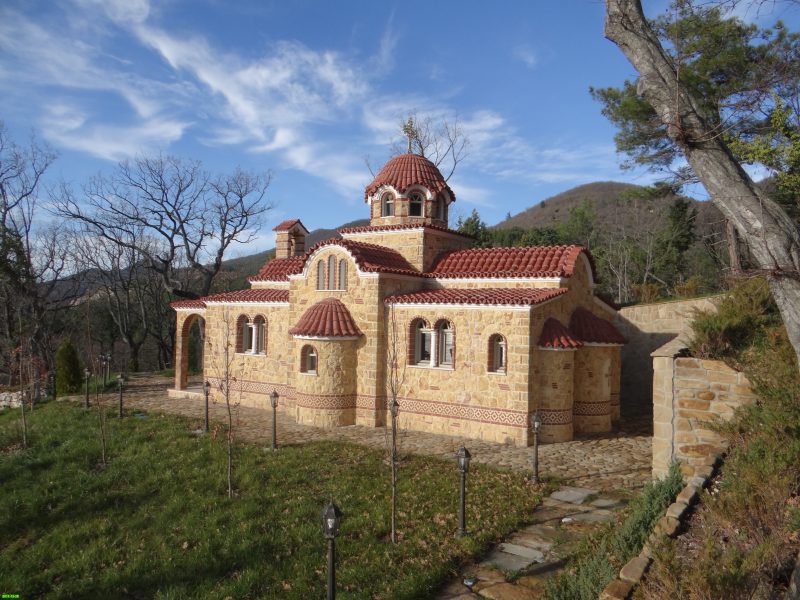 Church illegally constructed in the forest in the Krasnodar region, Russia. Photo: Viktor Chirikov, Environmental Watch of the North Caucasus (2017).

The second site is a 20-hectare plot and is where the aforementioned church was built. The tenant is “Axis Investments AO,” the same organisation that owns the neighbouring vineyards. The state registry lists the founder and CEO of “Axis Investments AO” as lawyer Alexey Tot.

According to the Novaya Gazeta newspaper, Tot is known as a business partner of Putin’s classmate, lawyer Nikolay Yegorov from St. Petersburg. Altogether, these sites have the appearance of a future private winery that one can imagine would serve high-ranking people.

Immediately after the attack, a petition on Change.org was created demanding a fair investigation of what was a violent crime. By the end of January 2018, more than 120,000 people had signed the petition. Environmental and human rights organisations across Europe sent official letters with the same request to the Russian Interior Ministry, the Prosecutor’s Office and the Federal Security Service as well.

In response to an inquiry sent by the EU-Russia Civil Society Forum, the Investigation Office of the Krasnodar region answered that the investigation was being “taken under special control”.

Whitelisted after a long struggle

For years, EWNC has faced constant pressure from authorities and businesses for its investigations of environmental legislation violations. At the time of the attack, the organisation was embroiled in a regulatory struggle to get itself removed from Russia's so-called “foreign agents” registry.

EWNC is based in Russia, employs only Russian nationals. Since 2014, shortly after Russia's “foreign agents” law was passed, the group stoppd receiving funds from foreign sources and has supported itself on funding from within Russia since that time. Nevertheless, EWNC was wrongly blacklisted and placed on the registry in 2016 on suspicion that the group was still accepting funding from foreign sources.

The label “foreign agent” itself can render an organization the target of constant pressure from authorities, state-owned media and pro-government civil society. All NGOs registered as “foreign agents” are required to submit reports to the Ministry of Justice every three months instead of just one annual report. There is also a persistent threat of new fines, the obligation to conduct an expensive annual audit, and the requirement to label all printed and online publications with the inscription “made by a foreign agent.” The “foreign agent” label stigmatises organisations as well, because society still perceives a “foreign agent” as a spy.

The EWNC appealed the decision in court but lost their case and started abrogation before a higher court. The group also appealed to the court to cancel the fines imposed on the organisation and its executives for not having entered the registry voluntarily.

In September 2017, EWNC sent an official inquiry to the Russian Ministry of Justice asking to be removed from the “foreign agents” registry. The deadline for replying to the inquiry expired on 9 January 2018, with no answer.

But soon after, the Ministry of Justice removed the organisation from the “foreign agents” registry, following a second detailed inspection of EWNC’s activities.

The Ministry of Justice removed the EWNC from the list very quietly. EWNC at first received neither a letter, nor a public notice, nor a comment from officials. Information about the group simply disappeared from the online register. Formal confirmation arrived only on 18 January 2018.

The confirmation notice proved that the results of the Ministry's first inspection in 2016, after which EWNC was declared a “foreign agent”, were wrong: EWNC did not receive foreign funding at this time, and by law should thus not have been included on the “foreign agents” registry.

While the Ministry of Justice did not find any foreign funding, they found some activities in the organization’s work, which they identified as “political activity”. Bureaucrats were referring to Shevchenko’s speech during an anti-corruption rally on 12 June, 2017.

The rally was part of some protests organised by supporters of Russian opposition leader Alexey Navalny in different Russian cities. “I said three times during my speech that I do not speak as a representative of EWNC, and I have a video recording of it, but the Ministry had still decided that it was a political activity of EWNC,” Shevchenko stated. EWNC plans to file a complaint about this component of the investigation, on grounds that it could leave them vulnerable to being blacklisted again.

According to EWNC deputy chair Dmitry Shevchenko, all fines were ultimately cancelled, except one: a personal fine against Andrey Rudomakha, the head of the organisation, for the amount of 100,000 rubles [roughly EU 1300].

Despite these multiple caveats, the group sees the decision as a victory. “This is certainly not the last campaign against us, I’m sure there will be other attempts to shut our mouth, but in this particular war we have won,” Rudomakha told local media.

Still cause for concern

“The war” against EWNC has been under way since 2014, and the group's leaders expect it to continue, despite its recent removal from the blacklist.

Vice chair Shevchenko described the move as “just a formality”. He thinks the Ministry of Justice would be happy to keep the organisation on the register if it had any grounds for it. “We are excluded from the registry because we filed a complaint in autumn and we had compelling reasons,” he explained. By the time EWNC was included on the list, it had not received any foreign funding during the period of time covered by the investigation.

These are only some of the struggles the group has faced in recent years.

EWNC first caught authorities’ attention when the group revealed serious violations during construction for the Sochi Olympics in 2014. At the time, local authorities tried to shut down EWNC in court, a move that received a strong response from both the Russian and international environmental communities. European green parties and environmental and human rights organisations from various countries made public statements urging Russian authorities to stop the pressure on independent environmentalists. BlueLink Foundation also joined the campaign.

Evgeny Vitishko, an EWNC Board Member, spent two years in prison on a tangle of charges targeting his activism during the Sochi Olympics and his apparent utterance of a swear word at a public bus stop.

Similar charges resulted in Suren Gazarayan, one of the most prominent members of EWNC, being forced to leave Russia and seek political asylum in Estonia.

In April 2017, during an extraordinary inspection at the organisation’s office, some important documents disappeared. In September 2016, masked men brutally attacked volunteer firefighters from EWNC and Greenpeace-Russia in Krasnodar, leaving two volunteers seriously injured.

To date, the police have not carried out a thorough investigation of any of the above-mentioned crimes. None of the attackers were ever found, arrested or convicted.