The threat of a restrictive NGO law looms over Slovakia 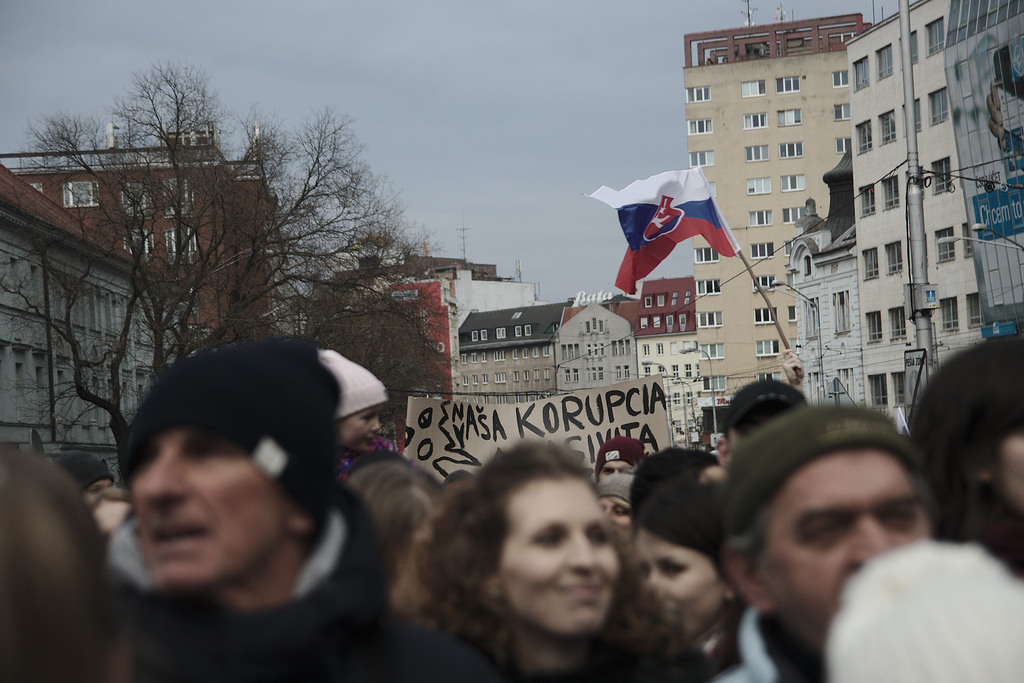 A protest in Bratislava after the murder of journalist Jan Kuciak and his fianceé Martina Kušnírová. Photo by Flickr user Peter Tkac. CC BY-SA 2.0

Slovak officials are increasingly using rhetoric that paints civil society as a danger to the country, which some fear is laying the groundwork for more government oversight — and more ways for those in power to punish non-governmental organizations (NGOs) that they dislike.

Former Prime Minister Róbert Fico warned that the government would soon propose and put before parliament a new NGO law:

In the autumn, the law goes to parliament, and for every organization in the third sector, it will be reported who finances it, whether it is from abroad or not.

Fico was forced to step down earlier in 2018, in the wake of mass protests over the murder of anti-corruption journalist Ján Kuciak. He remains head of the Direction – Social Democracy party (Smer-SD), which is part of the ruling coalition.

Fico claims that his fall from power was triggered not by genuine public outrage over cronyism and injustice, but rather by an orchestrated intervention by Hungarian-American businessman and philanthropist George Soros, along with the NGOs funded by Soros foundations, and Slovak President Andrej Kiska, whom Fico alleges is controlled by Soros. He also has accused NGOs of having links to organized crime groups.

Soros's advocacy for freedom of expression, government accountability, rule of law and equality has made him a favorite right-wing boogeyman. In neighboring Hungary, for example, the parliament recently approved a new package of laws dubbed “Stop Soros” that criminalize groups who help migrants and tax foreign donations to NGOs. (Editor's note: Global Voices is a grantee of the Open Society Foundations, part of the Soros network.)

Fico has even gone so far as to suggest that NGOs are orchestrating the influx of economic migrants and asylum seekers from Africa and the Middle East into Europe, as a way to foment geopolitical struggle and weaken the European Union:

See who is bringing these migrants here. That are the non-governmental organizations

Fico's former Minister of Interior Róbert Kaliňák has said that if journalists really want to know who is behind the migration wave, all they need to do is look at who is financing NGOs.

The issue of migration, documented and undocumented, has divided members of the European Union roughly in two camps. On one side are countries like Germany which have adopted a comparatively humane approach to accepting those fleeing war and insecurity and are generally pro-immigration as it brings fresh labor and talent into their aging population.

On the other side are countries like Hungary which have steadfastly refused to accept newcomers, claiming it would destroy the fabric of their societies.

Many NGOs have played an important role in offering support to migrants and asylum seekers, from saving lives on the Mediterranean to helping new arrivals integrate into society and learn their rights and responsibilities.

Fico's replacement as prime minister has also characterized NGOs as suspicious in light of protests in the country and promised to increase regulations on them.

Under current Slovakian law, NGOs with an income of more than 200,000 euros must submit financial reports, certified by an auditor, that detail their funding sources and make those reports publicly available. It's not unusual for others with lower incomes to do so voluntary.

Not all NGOs seem to be held to the same standard, though, in particular those with ties to the government. For instance, in a June 22, 2018 story, the news portal Aktuality.sk noted that its journalists could not find any annual report for the ASA Institute, an NGO affiliated with Fico's Smer-SD party.

In a recent episode of the political discussion program “Saturday dialogues” on Slovak public radio, Prime Minister Peter Pellegrini said he is interested who is behind “For a decent Slovakia” — the anti-corruption movement that was born from demonstrations over journalist Ján Kuciak's murder — and how they are financed.

A recent “For a decent Slovakia” gathering, held on 22 June, had an estimated 6,000-8,000 participants. The prime minister said he did not see any problem in people attending those protests, but that it is necessary to clarify how they operate:

I have no idea why the organizers “For a decent Slovakia” have been calling people to the streets again because nothing so dramatic has happened to give them a reason for it.

In reaction, Slovakian blogger Ivan Baltay criticized Pellegrini and Fico for delegitimizing the protests, explaining that participants are demanding justice for slain journalist Ján Kuciak and his fiancee Martina Kušnírová:

Mr. Fico and Mr. Pellegrini. The main motivation of our protests is Jano and Martina. If you disrespect it with conspiracy theories, you are laughing at the motivation. So also [laughing] at their motivation, for which they lost their lives.

Tomáš Bořuta, an organizer of “For a decent Slovakia” protests in the town of Považská Bystrica, wrote:

Dear Mr. Conspirator! (letter to the prime minister)
You have wailed about how can someone organize an event four days after the news of Ján and Martina's murder was published.
Now, big surprise, Prime Minister, Mr. Digital Leader [a reference to Pellegrini's former governmental position as deputy prime minister for investments and information], it is the year 2018. We did not take four days here in Považská, but just on Tuesday, after the news of their murder on Monday, we organized the first event — a candlelit vigil for Ján and Martina. There is, you know, something called social media, which have a great communication potential.
The first event cost exactly 0 euros, spelled out: ZERO, we organized it because we were shaken by this double execution and we needed to exorcise this sadness and insanity: that in our country, which you have “managed” for ten years with your colleagues, someone can in such a dishonest way kill two young people who have lived for the truth.

Pellegrini also has alleged that organized crime groups might be using NGOs as a cover, citing drug-related criminality. But when pressed for proof, he admitted it was just a hypothesis.

In a June 24 television discussion with his Hungarian counterpart Victor Orbán, Pellegrini said Slovakia will follow Hungary's lead in toughening regulations on NGOs to increase transparency surrounding their financing.

WORRYING! “Slovak PM P. Pellegrini reacted by saying that the transparency of NGO financing in Slovakia must also be increased. He even admitted that Slovakia, too, will toughen the appropriate laws and regulations…” @slovakspectator https://t.co/zjwjeMZula

Interestingly, amid these calls for more transparency surrounding NGO financing, the government does not appear to be meeting its own standards. A day after Pellegrini's television appearance, the Stop Corruption Foundation announced that, after years of unsuccessful attempts, it is suing the Government’s Office for unlawfully concealing information about a 1.3 million euro contract with Deloitte.