A mother in the minefields: Women work to make disputed Nagorno Karabakh a safer place 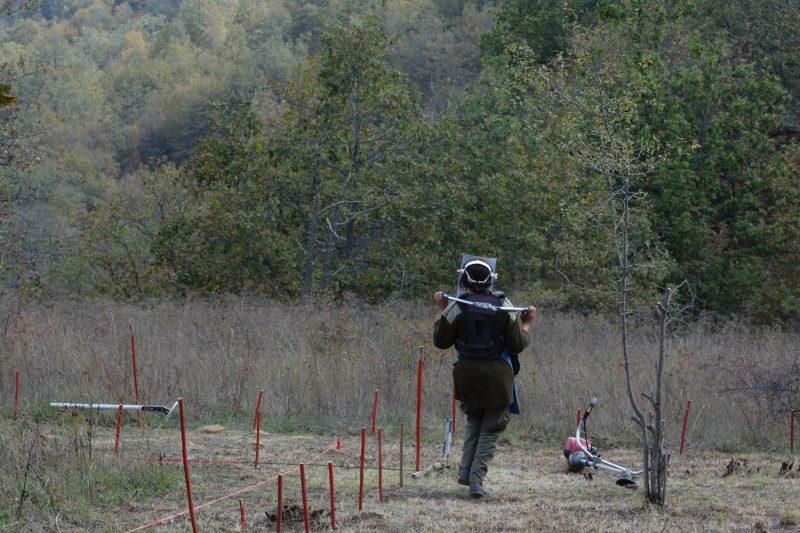 The following is a version of a partner post by Global Voices’ partner Chai-Khana.org. Text and photos by Knar Babayan.

From a distance, the three sappers all look the same – high boots, trousers with deep pockets, a special helmet, protective visor and gloves. Many locals in Nagorno Karabakh, a relatively traditional society, assume they are men. But these are women, and, like men, when they head into potential minefields, they are doing so to help their families survive.

“I’m doing it for my family, to provide my children with a safe and better future,” explains 38-year-old sapper Kristine Khachatryan, the married mother of three boys, ages six to 18. 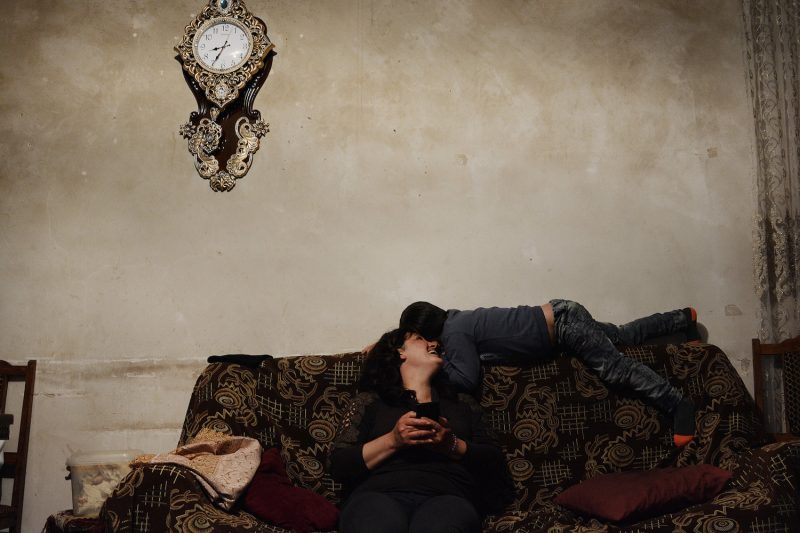 When Khachatryan comes home on the weekends, her six-year-old son Nairi follows her every step.

For years after its conflict with Azerbaijani forces in the early 1990s, Nagorno Karabakh routinely posted 20 or more annual civilian casualties from landmines and unexploded ordnance.

The Halo Trust, a British mine-clearing organization which has operated here for the last 18 years, now declares Karabakh is 90-percent mine-free, but the potential threat remains. Just this March, a mine explosion in the Martakert region took the lives of three sappers and wounded two villagers.

Taking on demining is no easy decision. But three years ago, when Halo Trust began to recruit its first women sappers, Khachatryan, a village-council accountant from Artashavi, 80 kilometers to the southwest of Karabakh’s main town, Stepanakert, decided to apply. 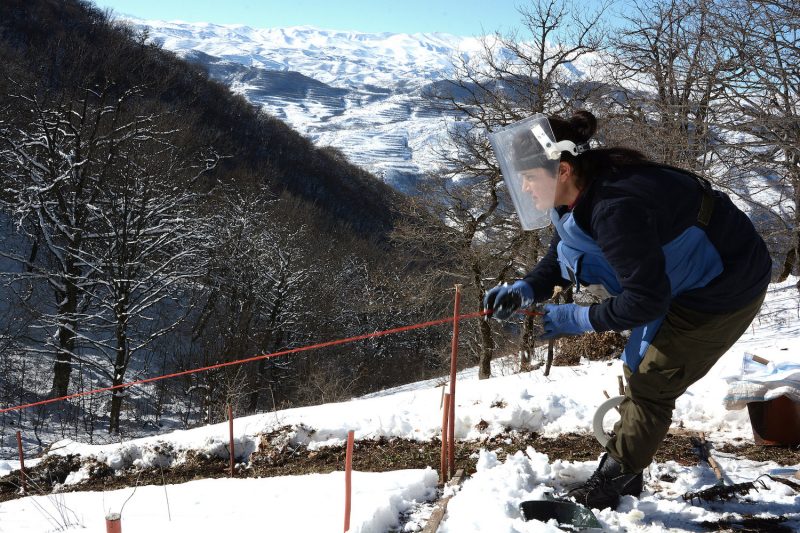 After checking and finding no mines in one spot on a piece of land near the village of Karegah, Khachatryan marks off a new area for demining.

She did so “out of curiosity” — in 2013, two mine explosions near Artashavi had wounded several locals — but also out of financial necessity.

Work as a sapper, which pays 225,000 drams (about $464) a month and comes with insurance, roughly quadrupled her income. 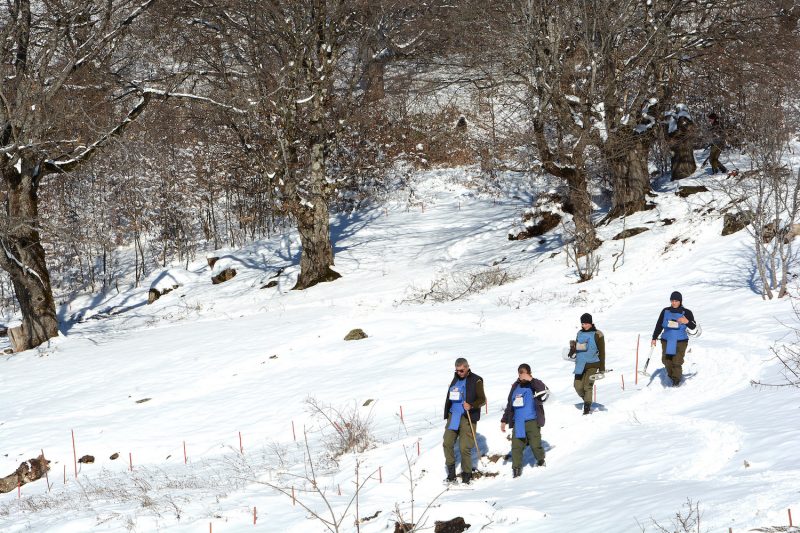 ”Of course, it's not easy to be a sapper. Of course, my family worries about me,” says Khachatryan. “I also worry and try to follow all the safety rules. If you are following the safety rules, you can keep yourself safe. The golden rule of doing a dangerous job is to be safe.”

Once certified, though, she did not expect to stay on the job for long. She accepted the post since the first demining field was close to Artashavi, within easy reach of her family.

“Of course, I was worried in the beginning,” she recounts, “but later I understood that there is no bad work. There are just bad people. And now I’m proud that I’m doing a big and important humanitarian job.” 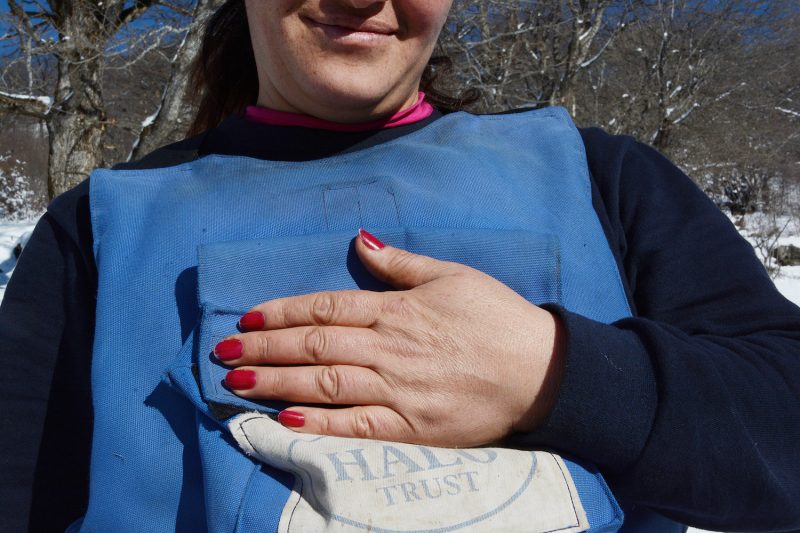 Even in the field, Khachatryan makes a point of painting her nails, wearing makeup and tending to her hair. Women should always look feminine, no matter what work they do, she says.

The fact that she also was a pioneer never occurred to her.

“Before becoming a sapper, I never thought that this was a ‘man’s job’ or about how I should work in a man’s world,” Khachatryan continues.

“You have completely different things on your mind when you enter a minefield,” such as routine daily matters or your family, she adds. 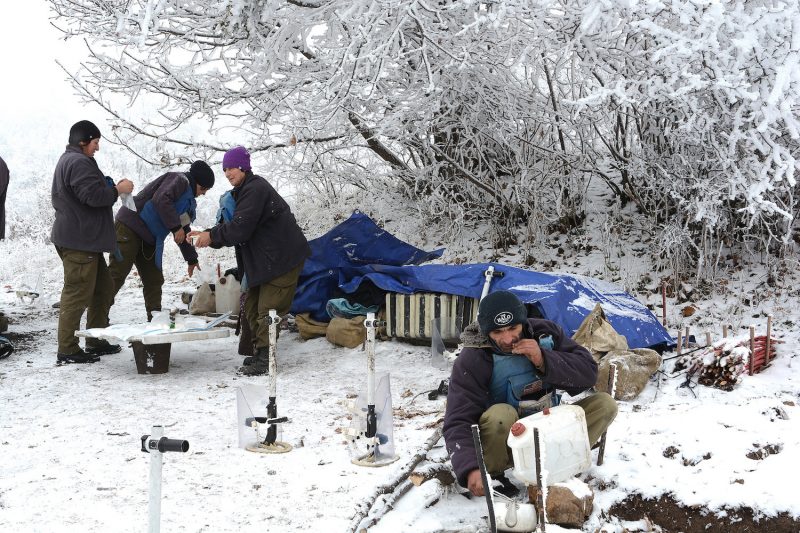 Very often, sappers work in fields far from their main base, usually a rented house in a nearby village or town. For this reason, sometimes a small, demined part of a field is turned into an open-air kitchen where they can eat and relax. On cold, rainy days, they also dry their clothes there.

They spend Monday through Friday in the field. Getting to the field station, a rented house in a village or town, can take time on Karabakh’s rough roads – over two hours to travel 65 kilometers by taxi, for instance. Public transportation does not always exist.

Khachatryan’s day starts at 7am each Monday. Already dressed for fieldwork, she quickly checks her mine-clearance equipment and drinks a cup of tea or coffee while running out the door. 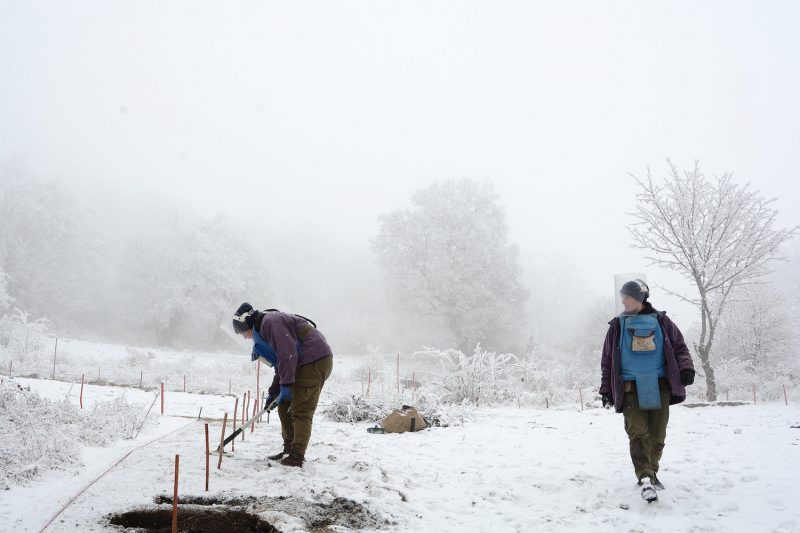 Most of this territory near the village of Karegah in the Kashatagh region had already been demined when Khachatryan and her team came to the spot, shown here in the winter of 2016. During their week of work here, Khachtryan found one mine. She says that she feels nothing in particular when she finds a mine; the emotions hit after it has been deactivated.

In her absence, her husband and sons — 18-year-old Gor, 16-year-old Tigran and six-year-old Nairi — have had to learn how to clean the house, cook, wash dishes and use the washing machine.

Khachatryan’s husband and three sons handle all the housework while she is away during the week de-mining.

Next year, when her oldest son, Gor, 18, heads to Stepanakert for two years of compulsory military service, she wants her two younger sons to follow him so that they can see each other and have access to more sports. 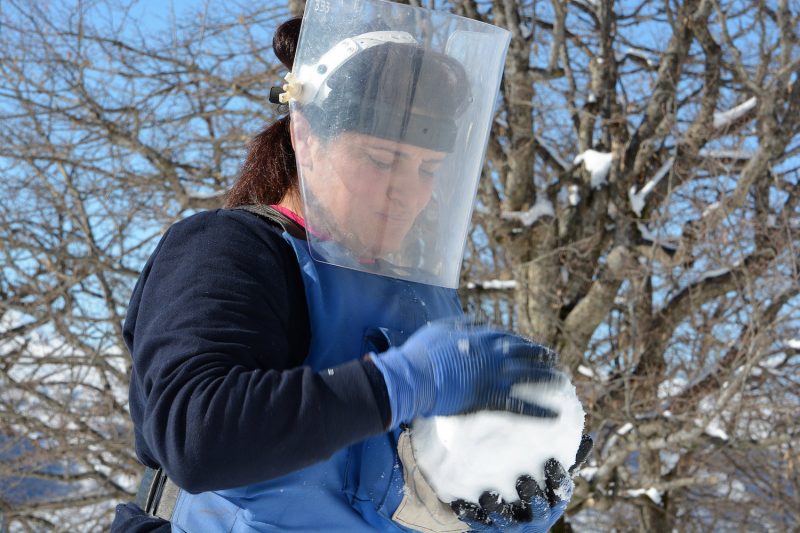 During her breaks on the Karegah field, Khachatryan made a sapper snowman to photograph and email to her sons.

The boys still do not think that demining is appropriate work for a woman, but they are proud of their mother when she appears in news stories.

Khachatryan herself concedes that “I don’t always feel myself in harmony as a woman, as a mother and as a sapper.” She would like to organize her work so that she has more time for her family; particularly, her youngest son, who was just three when she began demining.

Nonetheless, she believes that “women are not inferior to men professionally.” 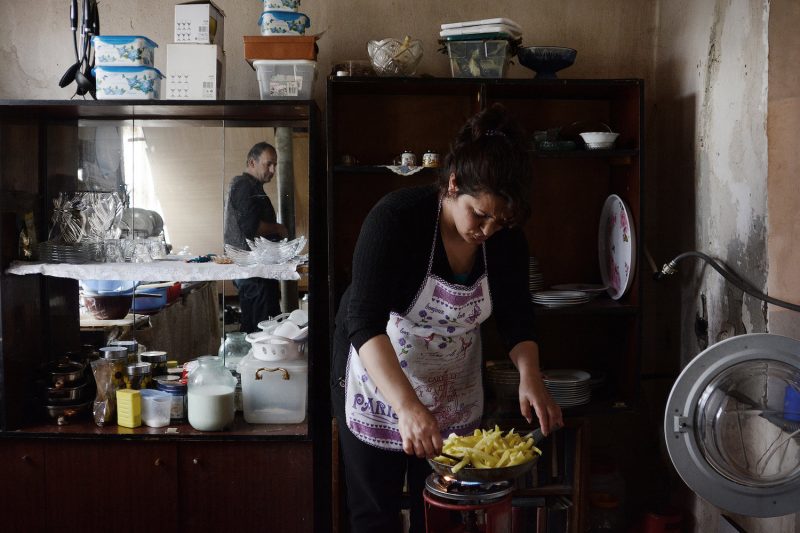 To make up for her absence during the week, Khachatryan tries to buy something tasty for her sons on the weekends. Here, with her husband, Garik, reflected in the mirror, she warms up French fries for lunch.

For some people, though, the mine explosion this March was a warning that it was time to change her profession. Many friends and relatives began to phone and ask whether she would leave her work, Khachatryan says.

“Honestly speaking, I had no sense of fear entering a minefield after that accident,” she elaborates. “It was deeply painful to me as a human being and I had a sense of huge responsibility to continue the work of my friends.”

She intends to stay on the job.