In the face of nation-wide violent deaths, Nigerians seek a better deal 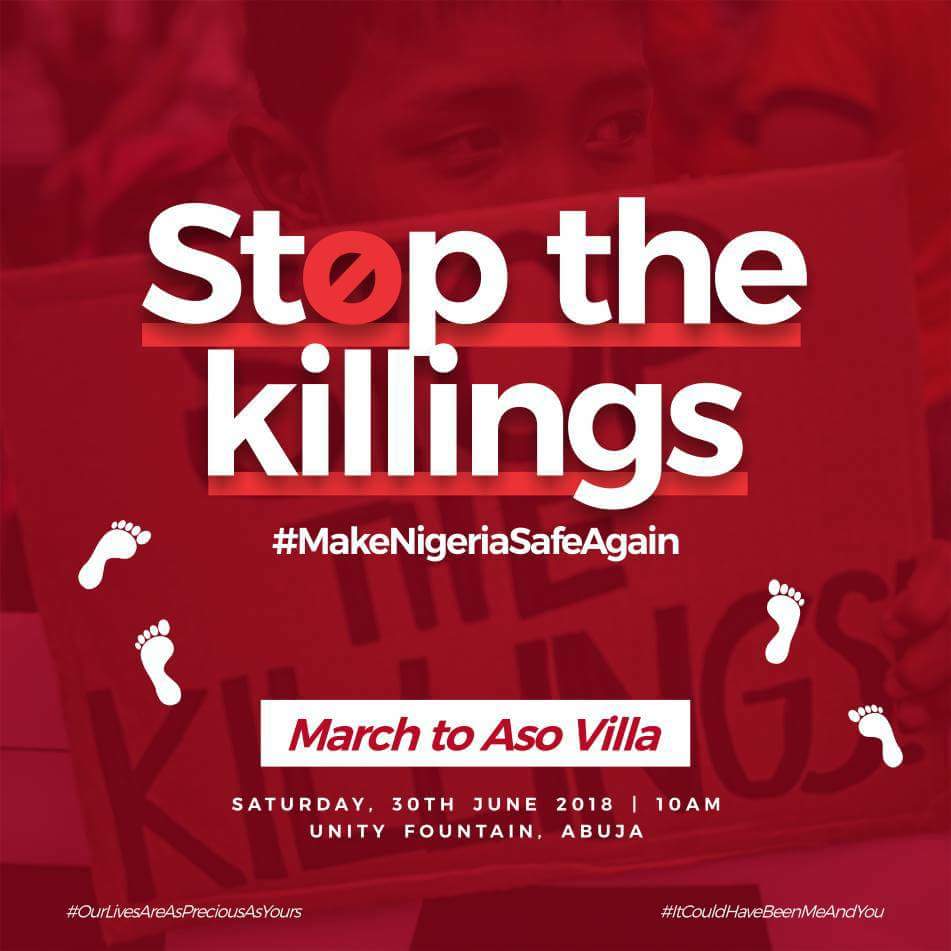 A banner calling for a march to Aso Villa, the workplace and official residence of the Nigerian President, located in the capital city of Abuja, to protest the continuous killings in Nigeria, June 2018.

On June 23, 2018, armed gunmen attacked 11 villages and killed more than 200 people near Jos, the capital city of central Nigeria's Plateau State, without any intervention from security forces, in one of the bloodiest retaliatory pastoral conflicts yet.

Following the June 23 attacks, Nigerians are saying enough is enough and have taken to social media to protest a nation-wide uptick in brutal killings using hashtags such as #MakeNigeriaSafeAgain and #StoptheKillings. Others have taken to the street, though in trickles.

As Africa's most populous nation, with 87 million of its residents living in poverty, the Boko Haram insurgency, communal clashes, banditry and other forms of conflict are also to blame for the soaring number of violent deaths in the country. Since January 2018 at least 1,813 people have been murdered across 17 states — double the 894 people killed in 2017 in Nigeria.

Gimba Kakanda, a writer and media influencer, took to the street along with fellow Nigerians to air his displeasure and had this to say:

Here to ask our politicians for a better deal! #MakeNigeriaSafeAgain pic.twitter.com/YckqrcOs3F

Dr. Oby Ezekwesili, former Minister of Education and vice president of the World Bank also took to the street:

I MARCHED as far as I could to the Villa to protest the INEFFECTUAL WAYS of .⁦@NGRPresident⁩ ⁦@MBuhari⁩ on the #TerroristsHerdsmenKillings.
Their Police, Military & SSS trampled on my rights- seized my banner. #StopTheKillings. #EndTheBloodFlow!#PlateauMassacre . pic.twitter.com/fljTDIt42q

Over 130 people dead in Plateau crisis

We are saddened by the events in Plateau state that have left hundreds dead, orphaned and widowed.
In these trying times, we should unite as a people and not fight among one another. Our hearts go out to all the victims of these attacks.
We are with you, we care#PrayForPlateau pic.twitter.com/iWuhfnyjRp

Even former vice president Atiku Abubakar was stern in his condemnation of the government's inability to protect its citizens:

Mindless killings in our country, we cannot be in continuous mode of bloodletting & mourning. Government needs to be alive to its primary responsibility of protection of lives and property. My heart goes to the victims of Barkin Ladi LGA of Plateau State https://t.co/x3f0UcHC2F

The authorities have a responsibility to protect lives and properties, but they are clearly not doing enough going by what is happening. The latest incidence in Plateau state, where armed gunmen attacked 11 villages on 23 June for at least seven hours and killed at least 200 villagers without intervention from security forces should be investigated.

On Twitter, the NGO has also shared a map of the killings:

Nigeria: Mapping the killings across Nigeria from January to June 27: #Nigeria#Borno#Benue#PlateauKillings#Zamfara#BirninGwari#Tarabapic.twitter.com/X8aw7J76TZ

Following massive condemnation over the June 23 attack, President Muhammadu Buhari paid a condolence visit to Jos. In his speech to distressed citizens, Buhari praised his government over the handling of insecurities in the country, but urged citizens to pray for divine intervention:

Nobody can say that we haven’t done well in terms of security, we have done our best, but the way this situation is now, we can only pray.

The president's remarks only added fuel to the fire, as the country's citizens are not having any of that.

Pres Buhari @MBuhari went to Jos to tell the people who had just buried hundreds of their loved ones that were massacred that there is nothing he can do they should pray to God, yet he has lots of security protecting him. Why didn't he send his security to Jos & pray to God?

With rising frustration in the country, the demand for good governance and protection of lives and properties continues to rise among Nigerians. Only time will tell if things will improve.