Who are the main candidates in Madagascar's presidential election? 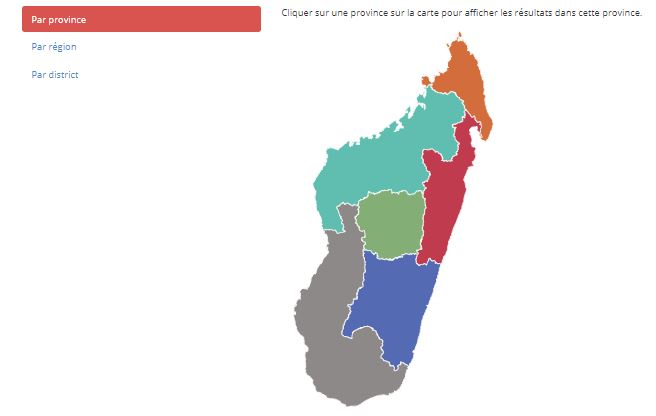 Elections in Madagascar via Madatsara info-graphics.

(This article was written by guest author Andry R. Razafimbahoaka. The article has since been edited by Global Voices to add clarifications and context.)

Following a decision by the Constitutional High Court to settle the country's political uncertainty and popular dissent, the people of Madagascar are due to vote in elections for a new president before the end of October 2018 at the latest. However, many feel that the spotty past of the main presidential candidates leaves much to be desired.

Between April 15 and 27, 2018, there were anti-government protests in Madagascar's capital, demanding the president's resignation on the grounds of the new electoral laws which the incumbent wanted to implement prior to the election. On April 28, the High Constitutional Court of Madagascar decided to order the formation of a new coalition government, combining members from various political parties. This government took office on June 12, its mission being to extricate the country from its current political crisis.

In an effort to assuage the protests, President Hery Rajaonarimampianina named Christian Ntsay, a high-ranking official of the International Labour Organization (ILO), as prime minister (and therefore head of the government). Since then, out of 30 ministers, ten or so have been drawn from the opposition.

As required by Madagascar's constitution, President Rajaonarimampianina must resign two months before the date of the first ballot, and there is a good chance he will be a candidate against two other former presidents, both of them with somewhat controversial pasts.

Painful and constant as they are, Malagasy crises represent a permanent reminder of this country's instability.

For this shrewd connoisseur of the island's history, all cycles of growth and development have been interrupted by successive political crises.

Every time Madagascar has drafted a take-off plan, it has been sold short a few years later by a major political crisis which has put a question mark against any positive dynamic under way.

Since April 21, 2018, opponents of President Hery Rajaonarimampianina have demonstrated against the new electoral law, which they consider disadvantageous to former presidents Marc Ravalomanana and Andry Rajoelina, both principal candidates in the next election.

This new law could have prevented the two former presidential candidates from running. Ravalomanana would have been barred because of his criminal record: in 2010, he was sentenced to forced labor in perpetuity after the death of 40 protesters who were repressed by his presidential guard in 2009 — a sentence that he never served. Rajoelina, who heads an advertising company, as well as private media entities, would have been prevented from contesting the election because of the restrictions over use of the media, and certain rules concerning campaign financing. These two sections were eventually scratched from the final electoral law proposal.

But according to Mireille Razafindrakoto, research director at the Institute of Research for Development (IRD), the main preoccupation of the voting population is worsening poverty. Even if Hery Rajaonarimamapianina has succeeded in re-establishing the flow of aid from the international community, he has not managed to stem the crisis. As is often the case in Madagascar, the political and economic crises are closely intertwined: the country has been marred into poverty for the last decade, with repeated political strifes in between. As such, the return of international aid to the country has been a major boost to its economy — so should his people now be entrusting him with another mandate, or playing the change card?

After denouncing the fraud orchestrated by Didier Ratsiraka, who was president from 1975 to 1993, and again from 1997 to 2002, Marc Ravalomanana became president in 2002 — in the first round of the ballot — against the will of the international community, which was in favor of a second round. Had this happened, it would have provided the final verdict between the two candidates with the most votes in the first round of ballot. Ravalomanana argues that since he already obtained more than 50% of the votes, there was no need for a second round of ballot since he already won.

In 2008, against the will of a significant portion of the population, Marc Ravalomana mooted the potential 90-year lease of 1.3 million hectares of land to the South Korean firm, Daewoo Logistics. Then, in 2009, the country was lashed by the world financial crisis. Street protest movements, lasting several months, finally led to his resignation on March 17, 2009, and his subsequent exile in South Africa.

On that day, the army passed power over to Andry Rajoelina, who had been the mayor of Antananarivo from 2007 to 2009. He was obliged to form a coalition government with the supporters of former presidents Marc Ravalomanana, Didier Ratsiraka and Albert Zafy. Having been handed power by the military, the international community pressured Rajoelina into giving up the presidency and organizing elections; he did so only in 2013. Over the course of his four-year term, poverty increased to an alarming degree, with zero or negative economic growth.

Rajoelina hopes, no doubt, to avenge this decision by standing in this year's elections. In that case, he will have to successfully distance himself from Maminiaina Ravatomanga, a rich Malagasy businessman — and former ally of the current president — who stands accused of tax fraud and money laundering for organized crime operations.

In this context, the next presidential election shows every sign of bringing another stormy episode to political life in Madagascar.