Tired of murders targeting women, Ugandans take to the streets in peaceful protest 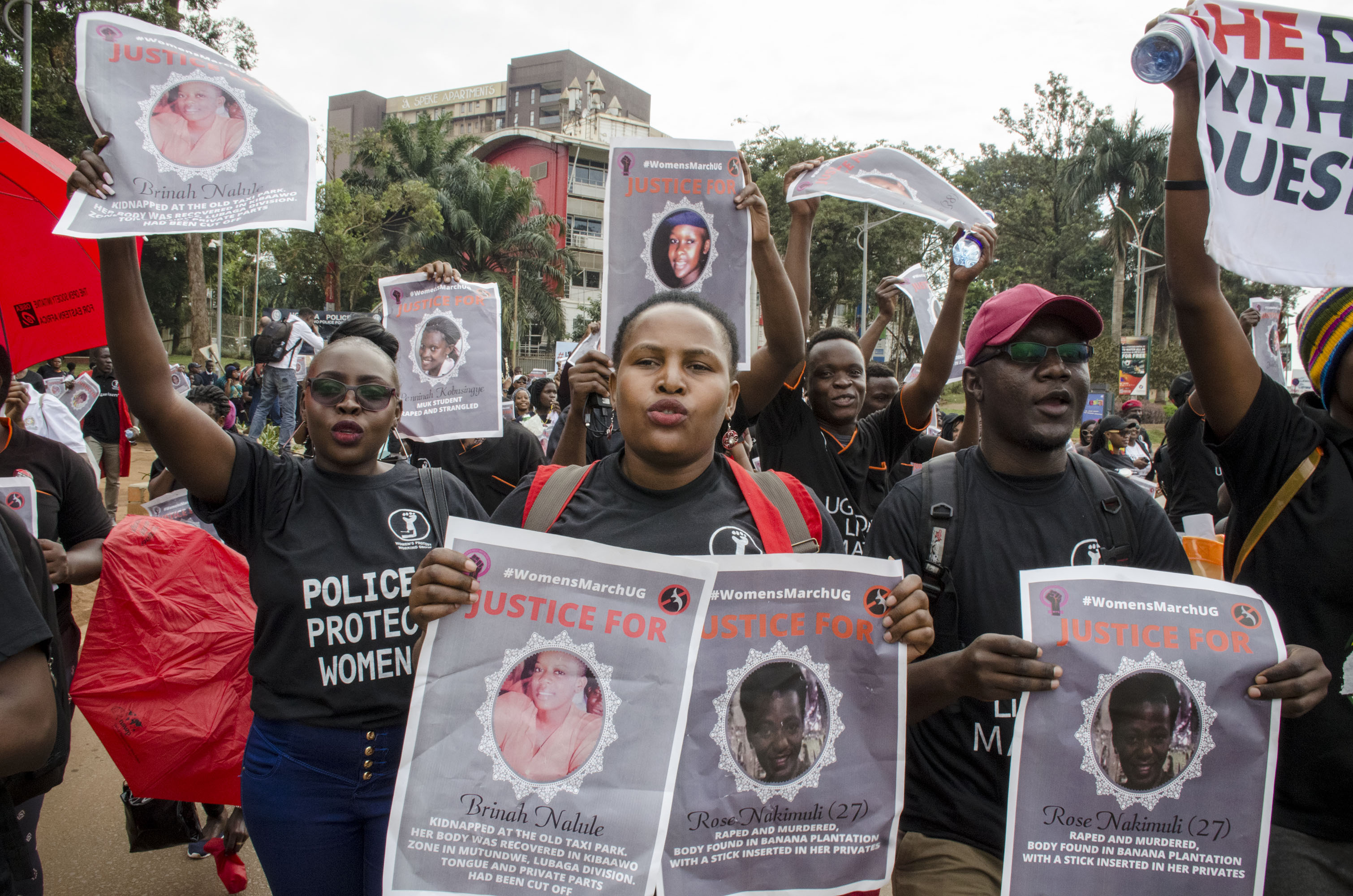 Since 2015, at least 42 Ugandan women have been kidnapped, maimed and murdered in and around Uganda's capital Kampala, half of them in a space of only three months in 2017. Some of their bodies were found with brutal signs of sexual violence.

The string of murders, all bearing gruesome similar details, has horrified the country. The motivation behind them remains unclear, but witchcraft is a popular theory. Authorities are yet to charge a single suspect.

Tired of living in fear, the women of Uganda felt they had to do something.

On June 30, 2018, the Women’s Protest Working Group (WPWG), with the support of feminists from other countries, staged a peaceful demonstration in the capital city of Kampala to protest against the rampant kidnapping and murders targeting women in Uganda.

And so I March. To remember them, they were not given any justice and no one was held accountable for their gruesome deaths. But I recognize them. I think about them, the families and friends they left behind with no closure, but fear and anger. #WomensMarchUG pic.twitter.com/r3ZQc6zXhW

At the march, which Global Voices attended, WPWG leader Dr. Stella Nyanzi told the crowd that the women are pursuing key interventions such as justice for the families of those murdered and also to push for action on violence against women. Fellow activist Patricia Twasiima then read out the names of the 42 murdered women.

Earlier, the police had attempted to block the protests claiming that the issues the women were protesting had already been resolved after President Museveni addressed the nation on his 10-point plan for restoring security in Uganda.

A letter from the Commissioner of Police stated:

This serves to inform you that the intended demonstration to raise awareness, express displeasure about the spate of killings and kidnap of women/girls cannot be allowed to go on as scheduled.

The women were determined to go on with the protest anyway:

We will no longer settle for speeches, thought and prayers, from the police force and government funded with taxpayers’ money. Its time for action so join us tomorrow at Centenary Park as we demand for answers to the unanswered questions #WomensMarchUg#WomenLivesMatterUG pic.twitter.com/VBXQznIy3Q

The attempted ban triggered even more support from Ugandans including journalists who vowed to join, with men and women alike.

Writer Daniel Kalinaki wrote an opinion piece in the Daily Monitor that made rounds on Twitter on why he would be joining the protest:

So I will be at the march. With my daughter. We will hold hands and walk, unarmed and peacefully, along with others. I want her to love her country and learn, as a young African woman, to stand up and speak up. When she grows up she, and others like her, will be the saviours of the broken, the beaten, and the damned. Welcome to the Black Parade – and I hope the police are smart enough not to stain it blood-red.

TV journalist Mujuni Raymond said that he would also join the protest:

I have been to the murder crime scenes of atleast 13 women, I have seen the gruesome nature their lives have been ended. It's inhuman to only offer hope and prayers. Action must be taken.

Like @kalinaki I will join the #WomensMarchUG not as a reporter but as a citizen.

Eventually, police gave in to the pressure. The women’s march observed strict guidelines set by the police.

This is the first peaceful protest led by activists since the passing of the controversial Public Order Management Act 2013, which grants the Police's Inspector General wide discretion to permit or forbid public gatherings. Past protests since the Act was published have turned violent.

The women of Uganda have proved that protests don't have to be violent. #WomensMarchUG #FreedomofExpression pic.twitter.com/hxLneO6wkZ

The March wields more pressure on authorities not only to provide a safer society for women but also to uphold Uganda’s constitution and respect citizens’ right to freedom of assembly.