With new anti-migration laws, the space for civil society in Hungary continues to shrink 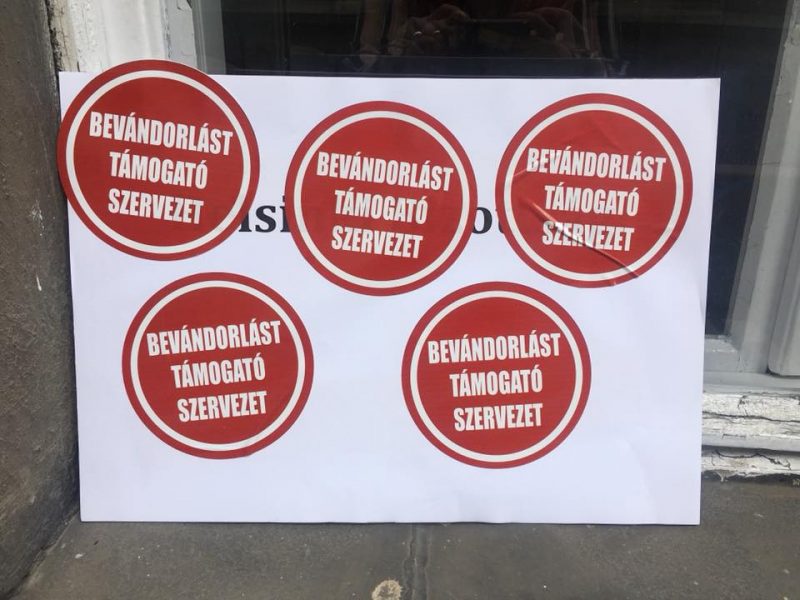 Stickers “An organization that supports immigration” (“Bevándorlást támogató szervezet,” in Hungarian) put on the office door of Hungarian Helsinki Committee in Budapest on 27 June 2018 by ruling party members. Photo by HHC, used with permission.

The latest is the European Commission for Democracy through Law (better known as the Venice Commission, as it meets in Venice), which is the Council of Europe's advisory body on constitutional matters. It advises member states, including Hungary, on how to bring their legal structures into line with European standards of democracy, human rights and the rule of law.

The Commission determined that the anti-migration laws “infringe upon the right to freedom of association and expression” and should be repealed.

Among other things, the laws create a new crime called “enabling illegal immigration” which could include providing legal advice and information on rights and responsibilities to migrants, and carry up to a year in prison as punishment.

They also impose a 25 percent tax on foreign donations to NGOs that support migration in Hungary.

As Human Rights Watch put it, if the Hungarian president signs the bills into law, “starting July 1, human rights workers and community volunteers could be prosecuted and jailed for up to a year for providing services, advice, or support to migrants and asylum seekers.”

The legislative package has been dubbed “Stop Soros,” a reference to Hungarian-American business magnate George Soros, whose progressive philanthropy has made him a target of conspiracy theories that paint him as an evil mastermind intent on destroying Hungary and Christianity. (Editor's note: Global Voices is a grantee of the Open Society Foundations, part of the Soros network.)

The atmosphere for civil society work in Hungary has become increasing hostile in recent years, and the “Stop Soros” laws are the latest of a series of policy reforms in Hungary aimed at increasing the government's power at the expense of non-governmental organizations (NGOs).

The 2017 human rights report prepared by the US State Department highlighted that Hungary had passed legislation that year requiring “NGOs that receive over 7.2 million forints ($26,000) per year in funding from abroad to register as foreign-funded organizations and to publish their ‘foreign-funded’ status on their websites and publications” besides other reporting obligations.

Those new requirements established in that law were, in the words of the European Commission, “discriminatory and create an administrative and reputational burden for these organizations.”

According to the state department's human rights report, the “government terminated long-standing cooperation agreements with some NGOs” during 2017, in particular those involved in monitoring of its work related to human rights, while the ruling party Fidesz vice president Szilard Nemeth declared that NGOs supported by George Soros must be “cleared out.”

It also noted that “NGOs affected by the legislation were frequent targets of media attacks by pro-government outlets,” while NGO workers consider Nemeth statement as incitement of violence.

At time time, over 180 Hungarian NGOs protested against the law, which they deemed “stigmatizing” because it implies they “pose a threat to the country” and “undermines mutual trust in society and questions the right to freedom of expression”. The overall impact of these actions is “discouraging Hungarians from creating their own NGOs to support local community projects” and stifling the work of the civil sector in a manner similar to Russia in 2011 and 2012.

According to the Venice Commission's opinion on the news “Stop Soros” laws, “establishing criminal liability for intentionally assisting irregular migrants to circumvent immigration rules is not in and by itself contrary to international human rights standards.”

However, it said they “go far beyond that” because the legislative package “criminalizes organisational activities which are not directly related to the materialization of the illegal migration” and “entails a risk of criminal prosecution for individuals and organisations providing lawful assistance to migrants.”

Many journalists and civil society activists in Hungary and across Europe have been saying as much, warning that the new laws seem to form part of this wider strategy to undermine and control civil society and the media sphere. American-Israeli-Hungarian journalist Lili Bayer tweeted:

Remember: Hungary's gov targets NGOs not because of any concern about migration, but because Hungary is small and these happen to also be the only NGOs working on civil rights of Hungarian citizens: looking into police abuses, representing protesters in court for free, etc.

Some have drawn parallels between these developments in Hungary and the legalized injustice of 20th-century regimes in Central and Eastern Europe. For instance, Serbian writer and blogger Igor Čobanović tweeted:

The last such law was brought up by Adolf Hitler and referred to helping Jews.

On 12 June, members of the Christian Democratic People’s Party (KDNP) affixed labels to the entrances of buildings that house non-governmental organizations which work with legal immigrants and refugees. The stickers read: “An organization that supports immigration” (“Bevándorlást támogató szervezet,” in Hungarian).

In one widely publicized case, this campaign targeted the offices of an NGO called Menedék, which helps to integrate refugees who have been accepted by the Hungarian government. The building is a yellow-star house, part of a World War II network of compulsory places of residence for around 220,000 Budapest Jews slated for execution by Nazi collaborators in 1944. Both the houses and their residents were obliged to display the yellow star, and after the war most of them were designated with memorial plaques or brass plates with the names of Holocaust victims who lived in the given building.

Another target of this labeling is the Hungarian Helsinki Committee, which works to protect and promote human rights. Its members live-tweeted as Fidelitas (Fidesz party's youth branch) posted the stickers while holding a press conference in front of their building on 27 June.

We are getting the stigmatising anti-NGO sticker right now! Live press conf being held right now in front of our building. pic.twitter.com/a2GT8VdZ7J

While the Venice Commission's opinion is not directly binding, it provides legal grounds for other actions at the national and European level. On 25 June, for example, the European Parliament's Justice and Home Affairs Committee voted by a large majority in favor of triggering the European Union’s so-called Article 7 process against Hungary, which could ultimately lead to sanctions for failing to uphold the EU's core values.