Did Syrians really have a choice? Final days in Ghouta: Caught between an immediate death and a delayed one 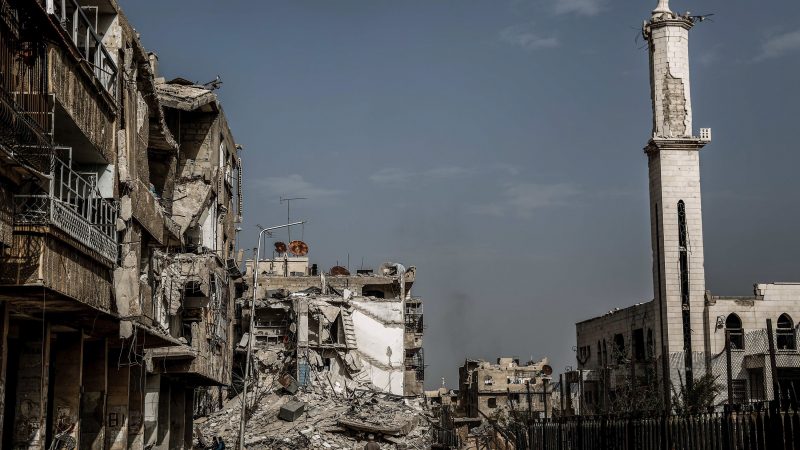 A Syrian man walks amid destroyed buildings in Jobar neighborhood in the suburbs of the Syrian capital Damascus on March 9, 2016. Photo by Sameer Al Doumy, used with permission.

Did people in Ghouta, Syria, really have any choice or agency over their fate in their last days there? Given the horrific and harrowing conditions they faced under stifling besiegement for five years, Ghouta residents came to realize that they were limited to just three options: heading to other regime-controlled areas, staying in a regime-controlled Ghouta, or entering into forced displacement.

Following the besiegement and continuous shelling that paralyzed life and transformed it to one lived underground, the Syrian regime, supported by Russian forces, started an offensive to break into Ghouta in order to gain full control over the area. During this time, residents were subjected to unrestrained shelling by multiple kinds of weapons including chemical, forcing them to live in basements where they shielded their children with the faith that their frail bodies could protect them. None of this was their choice.

Ghouta survivors recount waiting for a moment of quiet between two air raids to exit their basements and look for an internet connection so that they could connect with the world outside the besieged areas and get news.

In unbesieged areas, the regime waged a psychological war through its media apparatus. A general feeling of defeat, helplessness, and abandonment prevailed over opposition circles on social media.

In February 2018, the regime launched a massive military offensive on Ghouta, backed by heavy Russian airstrikes that targeted residential areas and field hospitals. Regime forces split the area into three sectors and then shelled each of these areas heavily and continuously. Simultaneously, special passages out of Ghouta and into shelters were opened, and civilians were allowed to leave Ghouta exclusively to these shelters.

These shelters were more like detention camps. People were allowed in only after their personal data was recorded and their names cleared against the blacklists of the various security branches of the Syrian regime. Residents of these shelters were not allowed out without a guarantor. Many of the young men who left Ghouta to these shelters were forcibly taken to military service in the regime's army. In addition, residents received food allocations in a humiliating manner evidenced in leaked videos on the internet.

Official news outlets attempted to reflect a contrary image, where videos were aired showing startled civilians repeating dictated chants and slogans hailing the president and the Syrian army who saved them from the “terrorists”.

Ahmad, 23, speaks of how he convinced his family (mother, father and three young siblings) to leave through these secure passages:

My father is a peasant. He owns a farmland in Beit Sawa. The offensive started with heavy and non-stop shelling, and the regime started penetrating the area from the side of Beit Sawa. My father got entrapped in the farm and we lost contact with him. When he finally managed to return to us he told us that he hid, along with a neighbor, in a hole under ground. When the shelling halted briefly, they got out of hiding and saw the Syrian army closing in, so they decided to flee, across the fields, back to Hamouriya.

The army advanced towards Hamouriya, but we were not able to flee to Irbeen, not with my little siblings, since the road was being heavily shelled and therefore there were no vehicles for crossing that long distance. That's when I started convincing my family to exit to the regime controlled areas. They opposed at first, but the regime was advancing steadily and my ability to protect my siblings and provide food was decreasing. After long arguments, accompanied by the sounds of heavy shelling closing in, I decided to walk all the way to Irbeen, while my family would exit through the passages to the shelters.

Many families were separated, taking similar decisions. Men stayed in Ghouta in fear of arrest or forced recruitment in the Syrian army, while many women and children fled to the shelters in fear of summary executions when the army would raid their neighborhoods.

A 35-year-old woman who now stays in a shelter says:

My husband, brother and I got separated. I came here with my mother and children, while the men stayed behind and later left to Idlib. I don't know if my decision to exit through the passages was right, and I don't know if I am going to regret it, but I was escaping a certain death. I don't know if I will ever be reunited with the rest of my family members, or when and where.

Many Ghouta residents chose to stay in their homes and “settle their political status” as the Syrian army took control of the area, fearing that going to Idlib would mean being subjected to shelling and besiegement all over again. Residents who made this choice included peasants who did not want to leave their land, the elderly and the poor.

Regime forces resorted to “settlement” as an alternative to a negotiations-based holistic political approach to the conflict.

The tactic is for regime forces to launch a massive military offensive on a rebel-held area. With excessive bombing, strategically targeting key facilities such as schools and hospitals and enforcing a stifling siege, rebels are left with one of two choices: continue a futile fight until death, or agree on a settlement with the regime, often reinforced by Russian support.

Settlement conditions vary slightly between the various rebel-held held areas but share the same key points. Apart from certain military and field-related details, rebels must surrender their weapons in exchange for a cease-fire and a guaranteed exit to the northern parts of Syria (Idlib). This choice was made by those who did not want to live under the regime, fearing arrest or murder. The regime applied this scenario in tens of rebel-held areas.

Safaa, a 30-year-old teacher, talks about that choice:

My decision depended on my parents and siblings. My brothers could not stay here because the regime will force all men into either military service or imprisonment. Both my parents are old, they cannot leave their hometown after spending 70 years here. My brother was martyred and left behind a wife and two little kids who are the center of our lives, but also our responsibility. Therefore my brothers left and I stayed behind with my parents and the family of my martyred brother.

I don't know what the future will be like. Maybe there will no longer be a stifling siege, maybe there will be no more shelling, but what about my brothers? Will we stay here? Will they force us to leave at some point? Will they allow me to keep on teaching? How will my parents be able to endure living away from my three brothers?

There are no guarantees of safety from the regime and its security forces for those who choose to “settle”. Remaining men are forced into mandatory recruitment in the army and sent to the front lines, making accomplices out of the victims of shelling in shelling others. Whoever is left may also face incarceration and torture. The most recent victim of these settlements in Eastern neighborhoods of Aleppo is lawyer Mahmoud Mihyo, who was arrested and later killed under torture.

I cannot trust this regime enough to live under its rule. I know that there are people who actually settled with the regime in rural Damascus, but many of them were imprisoned, killed or dragged to forced recruitment in Assad army.

Muhannad talks about choosing to leave Douma, the last rebel-held area in Ghouta, while his family remained there:

The question is should we stay in our land, under the pretext of settlement and reconciliation, but also under the control of a regime that has been killing us for seven years using all kinds of military, civil and social weapons? Should we leave the land of our childhood, where we grew up and had children of our own; where we built relationships with our neighbors and where we witnessed happiness and sadness? Should we leave it all behind and leave? How can I take my wife and four kids from a dark reality to an unknown one? Would we be living in a camp waiting for food aid boxes? Many questions and no definitive answers.

I took the bus of the forced displacement, alone. As the bus moved, I kept looking at my wife and children. I promised them that I will be reunited with them soon wherever I will be, maybe within a month, maybe within a year. Maybe I will not be able to see them ever again. I left them with enough means to help them survive and my prayers to stay safe. I bid my final goodbyes to my parents at their graves, then to my family, and I got on the bus of forced displacement and left.

People who face forced displacement live through the hardships of starting over in light of the scarcity of resources in the areas that host the forcibly displaced, mainly in northern Syria. This is amplified by the lack of international response to their humanitarian needs.

Hassan, an 18-year-old who spent his entire adolescence under siege, talks about his dreams:

“I want to continue my studies, but I also have to work to make a living. Until this moment I haven't been able to find a good job; neither did I get the chance to continue my studies. This is because I still haven't settled well. I am trying to focus on my new life, and to live through my longing to my family, friends and neighborhood.

With the money that I had, I started to sell vegetables on the street, which is my current occupation. I dream of growing my business to eventually own a supermarket so that I can make money and support my parents. There is nothing more bitter than living away from your loved ones, but I try not to think about it much so that I don't fall in depression. I try to fool myself by pretending that I am just like any traveler and that I will return home one day. Every night before I go to bed I flip through the photos of my parents, my brothers and sisters and my friends who were martyred in Hamouriya. I wipe my tears in hope that I will wake up in the morning to knowing that I can finally go home and be reunited with my family.

The international community continues to fail to find a way to stop the fatal violence in Syria. Hundreds of thousands have died from torture, hunger, and cold in refugee camps, extreme shelling or on the front lines alongside the regime forces.

Rafeef, a young woman in her 20s who left Ghouta, proclaims:

Now that I am out of Ghouta, I will make it my life purpose to tell the world the story of our displacement, of who did this to us, why he did it and what he did to us before sending us to exile.