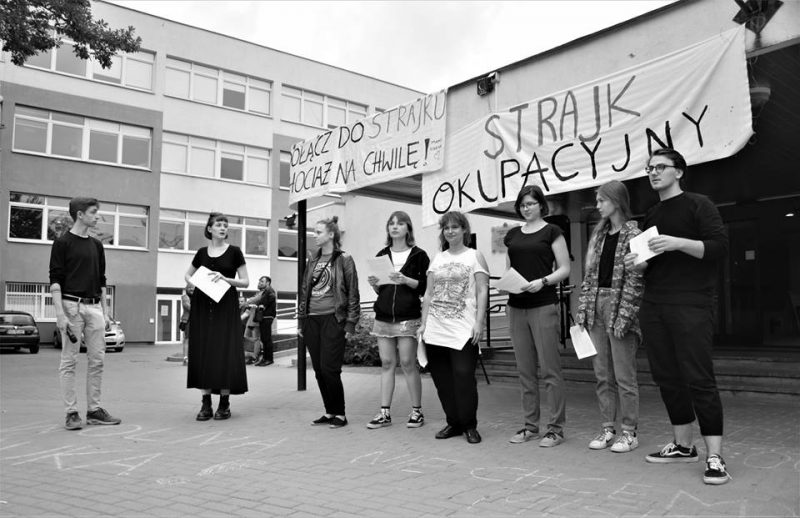 Student protests in Poland have succeeded in delaying a bill that opponents say could threaten the autonomy of universities.

Known as Bill 2.0, the act includes proposals to reduce funding and research opportunities for regional universities, and aims to diminish the control held by the University Senate — a body of students, academics and other university employees who organise the day-to-day running of the institution– in favor of a University Council, consisting of individuals from outside universities.

Another clause, recently added, requires female researchers employed at academic institutions to retire from their careers at the age of 60, five years before their male colleagues.

Poland's ruling right-wing nationalist party, Law and Justice, has increased governmental control over many facets of society since it took power in 2015. Critics feared this draft law was another glimpse of authoritarianism.

For almost two weeks, fences, balconies and walls in universities across the country were peppered with handmade banners, painted cardboard and fluttering pamphlets, as students occupied spaces and voiced their disapproval of the planned reforms. The protests marked the first nationwide occupation strike of students since 1989.

On a Warsaw balcony, a movement is born

The bill is being pushed by Jarosław Gowin, Minister of Science and Higher Education. Earlier this month, after over 100 amendments by Prime Minister Mateusz Morawiecki, it was sent for a second reading in the Sejm, the lower house of the Polish parliament.

The assumption was that it would come into force around October 2018. This was not to be the case.

The first protest against it was announced on Facebook, a 5 June event titled “Wolne Dni Akademii” (“Free Academic Days”). Students from the University of Warsaw occupied the Kazimierz Palace balcony, which juts over the fashionable Krakowskie Przedmieście street.

Under the slogan “Nauka Niepodległa” (“Independent Learning”), resistance grew. Participants hosted panels and events, gaining the support of institutions from Poland and abroad.

As some politicians, like possible presidential candidate Robert Biedroń, flocked to Twitter to congratulate the students, others physically supported the protests, bringing food and sleeping bags.

College students at the University of Warsaw are protesting in defense of the cases for which Gowin's reforms strike the hardest: smaller universities. Showing solidarity with the smaller centers of autonomy and democracy, which are as important in universities as in state and politics. Thank you!

Pictures circulating online depict make-do tents erected in the center of the balcony, with students propped up against the balustrades surrounded by cups of coffee or boxes of produce.

University of Warsaw students announce that they will stay at the Kazimierzowski Palace (Rector's Office) until tomorrow at least. They are only asking for substantive dialogue on Bill 2.0 and have 11 demands.

Meanwhile, supporters of the draft law or of the Law and Justice party tried to discredit the protesters, suggesting their actions were foolhardy and not representative of the majority.

It's not a student protest, just a few red swine, or rather their spawn. Do not say this protest is staged by students because normal students distance themselves from this.

Students in Warsaw remained on the balcony for 10 days, until work on the measure was postponed. In that time, however, they were far from being the only ones mobilising.

At institutions across the country, students and their supporters young and old held marches and discussions and hung banners against the draft law. One poster asked quite simply, “What is Gowin on?” 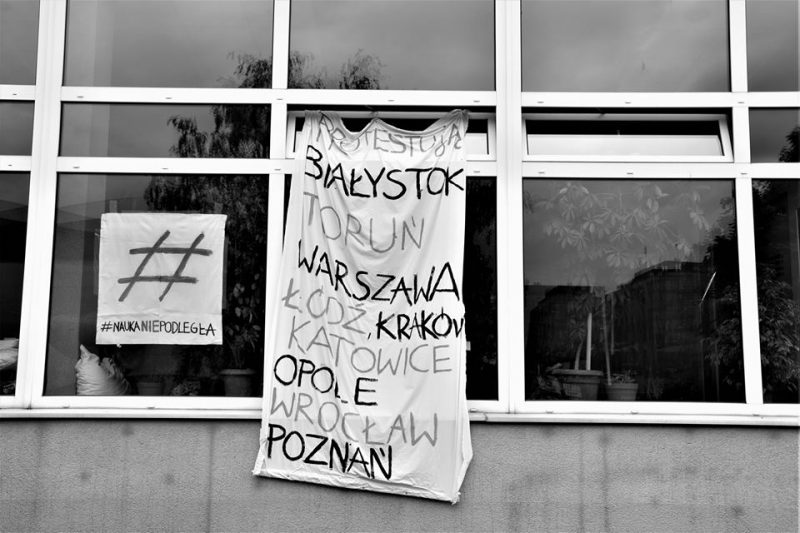 A balcony with protest banners with the hashtag #naukaniepodległa and names of cities where protests had been taking place. Photo by Pamela Gąsiorowski, used with permission.

Students also occupied university spaces. On 9 June, at the AGH University of Science and Technology in Krakow, a struggle ensued when a doorman entered a room occupied by students, claiming that they had pretended to be lecturers to gain access and demanding the return of the key to the room. The students complied with his demand, but refused to leave.

The protest group based there posted on Facebook three days later, saying they had recently been threatened by police who believed they wanted to “break in” to university buildings. Another post later explained that they were organising around issues that go beyond the draft law:

During the debates and lectures conducted during the occupation strike, much more issues were raised than just the reforms of Polish universities. In this way, we express our opposition not only to the Bill 2.0, but also to the current shape of the university as an undemocratic, internally divided and hierarchical space.

In Poznań, protests began on 12 June, with students occupying the Rectorate. Here they remained adamant that their quarrel was not with the rector or university authorities, discouraging disruption of the rector’s work by ensuring only 20 people were on active protest during the day, and seven at night.

After the Polish parliament postponed the vote until July, with the ministry claiming it would submit a changed proposal, students across the country ended their protests.

Throughout, Minister Gowin remained adamant that the act would improve university education – according to the newspaper Wiadomości, he claimed he did not understand the protests, explaining that he had consulted “all academic groups” about the bill over the last years.

However, one anonymous participant of the protest in Warsaw told OkoPress that students decided to react because “the consultations were conducted only with people supporting the law.”

Another, Mateusz Burzawa, who sang in the revolutionary choir during the Kraków protests, hinted to Global Voices that issues with the bill were founded in Gowin's own attitude:

[The protest] does not mean that higher education does not need reforms, and how that everything in this bill is bad, only [that] the faith of the minister that “the market will solve all problems” is an ideological approach.

Not all students thought the protests were the right approach. On Facebook, Kacper Aleksander Czechowicz dubbed the action at the University of Warsaw a “farce,” suggesting that the organisers had sabotaged the work of the Student Parliament. Appointed representatives to the Student Parliament in Poland are equal partners to negotiations on the national level, with aims to lobby for student rights through representing the student body in negotiations with the government. 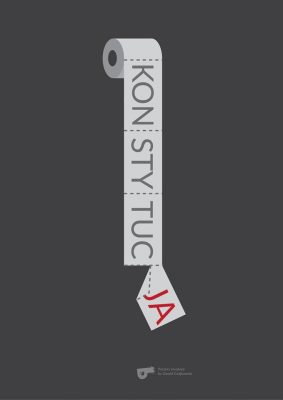 But graphic designer and activist Dawid Czajkowski countered in a separate post that the Student Parliament does not stick up for students as it should (in his words: it is “as soft as butter on a hot day”).

This why he used his company, Posters Involved, to support the students, whom he thinks are the most threatened by the draft law. Czajkowski's protest posters included a representation of a vulnerable white block, painted red with the word “Autonomia” (‘Autonomy’), and a disembodied saw emblazoned with “Gowin 2.0″ slicing through its middle.

The new law on higher education centralises responsibility at universities and withdraws autonomy from individual faculties…In addition, smaller Universities are marginalized in favor of the larger ones. This means that you can only make up oneself in a few centers in the country, which is an obvious possibility to control doctoral students, their future, etc.

In the meantime, the Academic Protest Committee, which organised the original demonstrations, plans to host a congress to bring together all of the protests groups from around the country to decide the next course of action.

The fight is not over yet.