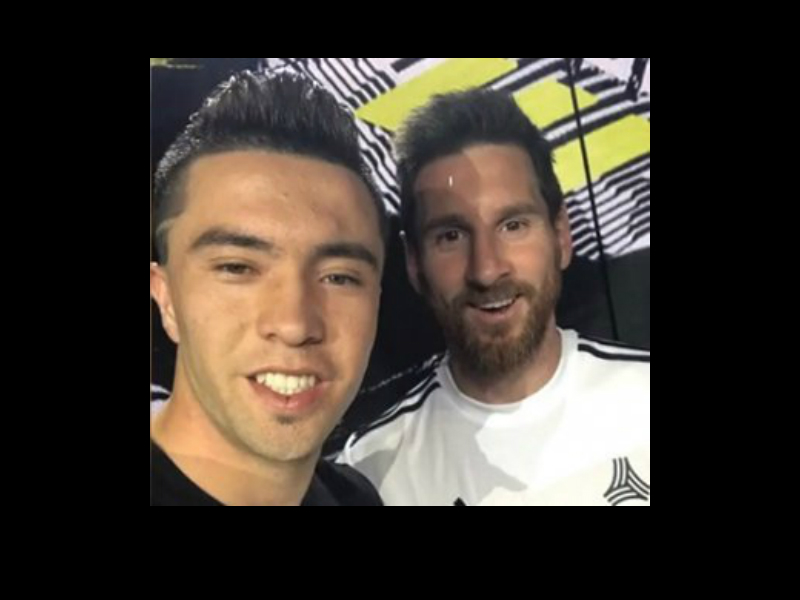 Football player Erfan Hezim took a selfie with Lionel Messi weeks before he was detained in a re-education center. Image via FifPro.

With World Cup 2018 underway, all eyes are focused on the game. But many people are unaware of what — or who — is missing on the field.

The Fédération Internationale des Associations de Footballeurs Professionnels (FIFPro), the worldwide professional football players’ union, issued a statement on June 13, 2018 calling for the release of Erfan Hezim, a 19-year-old Uyghur football player who has reportedly been detained in a “political re-education camp” in China's western Xinjiang province since February 2018.

Hezim was detained soon after he returned home from a football trip to Spain and Dubai.

Despite his status as a rising star in local football, Hezim's fame did not exempt him being sent to a re-education camp. According to local sources for Radio Free Asia, Hezim was detained for “visiting foreign countries”, though his trip was mainly for football training and matches.

Hezim is among the estimated one million Uyghurs in Xinjiang who have been sent to re-education camps for unlearning and correcting their religious and political views.

What happens at re-education camps in Xinjiang is not widely known, but testimonies from ex-internees reveal that the camps — which are operated at county, township and village levels — are secured with barbed wire, surveillance systems and armed police. Ex-internees said they were sent to the camps without trial and while there, were forced to convert their beliefs and pledge loyalty to the Chinese Communist Party (CCP).

Shawn Zhang, a law student, used satellite imagery to visualize the scale of the camps, shedding some additional light on the issue. 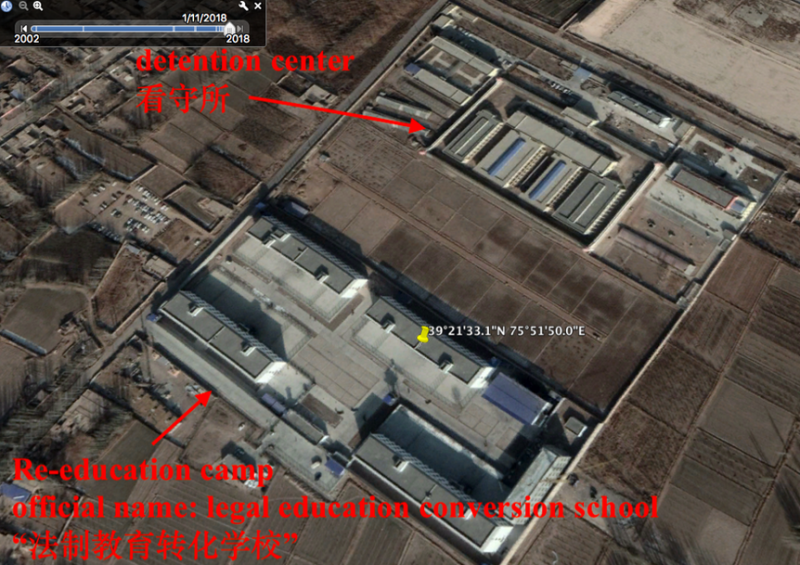 There have also been claims that Muslim internees were forced to eat pork and drink alcohol in order to prove they are no longer “extremists”.

Uyghurs with overseas connections appear to be among the top targets of this type of political detention. In March 2018, just one month after Hezim's detention, Ablajan Awut Ayup, a prominent Uyghur musician who bridges Uyghur and Chinese audiences with his bilingual songs, went missing too. His fame, in this case as a cultural icon, also failed to save him.

Guligeina Tashimaimaiti, a Chinese-Uyghur PhD student at the University of Technology in Malaysia (UTM), has been missing since January 2018. According to the Scholars at Risk network, Tashimaimaiti returned to her home city of Ghulja in December 2017, in order to search for her missing parents. Her sister, who is also studying in Malaysia, confirmed that Tashimaimaiti was sent to a re-education camp.

Ugyhurs who reside overseas use Twitter to advocate for the release their relatives back home.

Halmurat Harri, a Ugyhur-Finnish medical doctor who was born in the Turpan city of Xinjiang, called for his parents’ release:

My parents always taught me to love. They are in China’s re-education camps. I hope that good will win over the evil, I hope that all this suffering will end. I don’t seek revenge, but justice. Love what is Good, hate is evil; cling to what is good. Please pray for us! #FreeMyParents pic.twitter.com/r92R66K0wX

@Uyghurspeaker, who has been keeping track of the detention of Ugyhurs in Xinjiang, recently translated a Uyghur-Canadian's post about his mother’s death in a re-education camp:

Uyghur-Canadian Abdulaziz learned today that his mother Adalet (from Pichan) died in chinese concentration camp/prison on Mar. Her body wasn't returned to the family (believe to be cremated). She was taken on Aug,2016 right after her trip to turkey. pic.twitter.com/sqUbFYi5BP

Some Uyghurs from Western countries have taken action, calling for public attention to be placed on these Chinese concentration camps:

About 100 Uyghurs demonstrated in front of ?? ambassador in Nederland for demanding USA ?? to put pressure on China to close the concentrations camp where one million Uyghurs has been detained. pic.twitter.com/EvmKU3lvqF

Beijing has mostly avoided commenting on the re-education camps to the outside world — but internally, state and party news outlets say the camps are part of a battle against Muslim extremism.

During the Lunar New Year in February 2018, Zhang Chunlin, the Party Deputy Secretary of Xinjiang Uyghur Autonomous Region, had an exchange with university students in Yarkant county. When Zhang asked one university student to comment on his family members being sent to the re-education camp, the student answered:

This is a party and government policy to cure the sick and save my relatives from being punished by law. I completely understand the measure and hope that they will be converted into people who are good for society.

Outside of the official discourse, one seldom sees comments or discussions about the issue on Chinese social media.