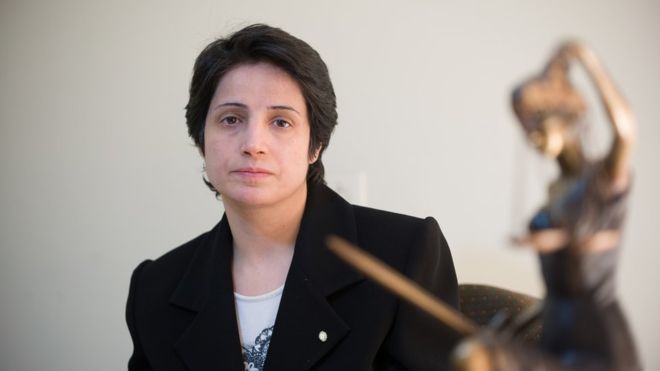 Sotoudeh was arrested on June 13 in her home and told without further explanation that she was being taken to Evin Prison in Tehran to serve a five-year sentence that she was unaware had been issued, having been convicted in absentia.

“During the interrogation, she was told that the charges against her are ‘propaganda against the state’ and ‘assembly and collusion’ because she colluded with Ms. Shaparak [Shajarizadeh] in the courthouse in Kashan,” Sotoudeh’s husband, Reza Khandan, told the Center for Human Rights in Iran (CHRI).

“It’s the most laughable thing to say a lawyer met and colluded with her client,” he added. “Meeting a client is a basic part of a lawyer’s job. But the more interesting thing is that Shaparak was arrested in Kashan (152 miles south of Tehran) and Nasrin was not able to go there and therefore no meeting took place in the Kashan courthouse.”

Since December 2017, Iranian women including Shajarizadeh have been arrested for peacefully protesting the Islamic Republic’s compulsory hijab law by removing and waving their headscarves on busy streets. Known on social media as the “Girls of Revolution Street,” at least three of the women have been officially charged for their acts of civil disobedience.

According to Article 638 of Iran’s Islamic Penal Code, “Women, who appear in public places and roads without wearing an Islamic hijab, shall be sentenced to 10 days to two months’ imprisonment or a fine of 500 to 50,000 rials.”

Sotoudeh’s husband continued: “If you ask me what the authorities are thinking deep inside, I will tell they just want Nasrin to sit at home and avoid cases like the Girls of Revolution Street and stop defending civil and political activists and not give interviews to the media.”

“I really think they are confused,” he added. “They have detained her and now they are fabricating a case against her.”

Khandan said Sotoudeh is contemplating joining Iran’s hijab protesters to protest against her own arrest.

“Nasrin told me during visitation today [June 17] that she has worked hard on the cases against her three clients—the Girls of Revolution Street—and believes the compulsory hijab is inhumane and against human rights and if her detention continues, she, too, will remove her headscarf in prison,” he said.

Khandan also told CHRI that Sotoudeh has refused to hire a defense attorney in protest against the judiciary’s recent introduction of a list of 20 state-vetted lawyers exclusively allowed to defend detainees held on politically motivated charges in Iran.

On June 17, Khandan and defense lawyers Arash Keykhosravi and Payam Derafshan as well as several civil rights activists gathered outside the gates of Evin Prison to demonstrate against her arrest.

Keykhosravi and Derafshan are representing the family of Kavous Seyed-Emami, an Iranian Canadian academic and environmentalist who died under suspicious circumstances in Evin Prison in February 2018.

Security agents beat the protesters and detained nine of them for several hours, Khandan said. Keykhosravi and Derafshan, as well as two other protesters, “received a lot of injuries,” he added.

“We gathered in front of Evin at around 10 in the morning today [June 17] but agents pushed us away and the gathering actually took place under the bridge near Evin,” said Khandan. “As soon as our friends started to chant slogans and raise their banners, agents attacked us with fists and kicks and arrested nine of us.”

“We were inside a police van for an hour and then we were transferred to a courthouse and eventually we were freed after a couple of hours,” he added. “Then I immediately went to Evin Prison to see Nasrin because visitation hours with prisoners was today.”

After he was released, Derafshan told the reformist news site Etemad Online that a judicial official at Evin apologized for the rough treatment.

“Following the inappropriate confrontation by the security forces, the judiciary’s representative in Evin Courthouse apologized for their mistakes and said he would meticulously investigate the incident for the sake of security and proper crisis management,” Derafshan said.