The Nepali “sausage vine” evergreen plant is famous in the United Kingdom, yet remains unknown in Nepal 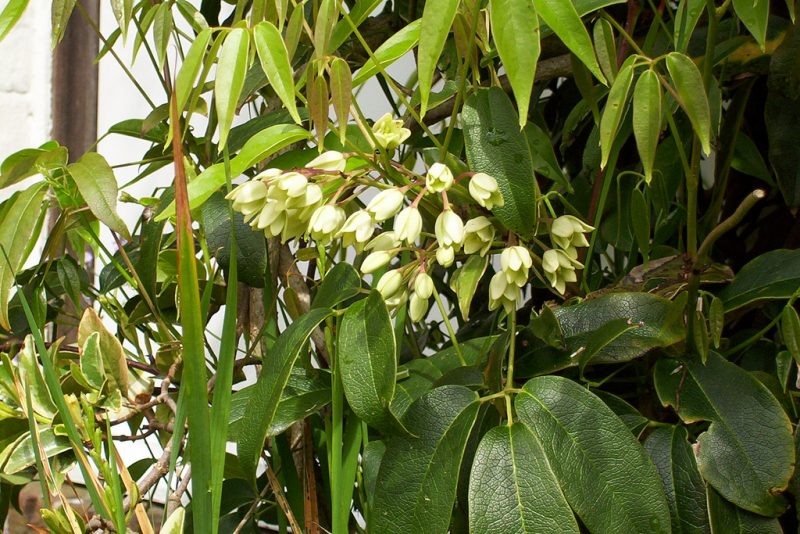 The sausage vine plant, a huge hit among gardeners in the United Kingdom (U.K.), originates from the jungles of Nepal, yet it remains in relative obscurity there due to lack of awareness and proper promotion. Nepali and Indian botanists are now trying to shed some light on the aromatic but long-forgotten sausage vine through research and advocacy.

Nepal boasts botanical records of 6,000 species of flowering plants (about four times as many as the U.K.), and botanical experts anticipate that the number will reach 6,600 species when more remote regions are fully explored. Nepal possesses 2.8 percent of the total number of global plant species and its share of flowering plant species is also nearly 2.8 percent of the global total.

Called “Gufala” in Nepal, the sausage vine is native to the Himalayas and its name derives from its reddish-purple sausage-shaped edible fruits. Its sweetly scented purplish, bell-shaped flowers also make this plant alluring to gardeners everywhere. The vine is found in the forests, shrubberies and shady ravines of the Himalayas ranging from Pakistan to southwest China at an altitude of 1,500-4,000 meters.

Traditionally, the vine is thought to be effective for treating rheumatism (Sikkim, India) and its stem, when bent into bangles, is believed to cure orthopedic problems (Darjeeling, India).

The Frustrated Gardener, a gardening blog by Dan Cooper, explains the unique wonders of this fragrant ‘evergreen climber’:

Holboellia latifolia is a fantastic evergreen climber if you want to cover a wall or pergola quickly. … What makes Holboellia especially desirable is the insignificant but deliciously scented flowers which appear in early spring and last for many weeks. The greenish male flowers and the pink female flowers appear in clusters along the twining stems. They fill the garden with a scent of gardenias, especially strong during warmer spells. All it requires in return is a bit of shelter from the worst gales, a moist soil and a feed with blood, fish and bone every spring.

Gardners and botanists on Twitter have also raved about the virtues of the sausage vine:

The sausage vine's ties to a colonial past

Roy Lancaster, a British plantsman, gardener, author, and broadcaster, traveled to Nepal in 1971 and left with 400 plant seeds including the sausage vine, according to his book A Plantsman in Nepal.

Sausage vine studies date further back to the mid-1800s, at the height of British rule in India. Nepali botanist Kamal Maden says that Danish surgeon and botanist Nathaniel Wallich was the first to study the sausage vine species while working in India to establish the Calcutta Botanical Garden and named the plant after his ornithologist friend Carl Peter Holboell. 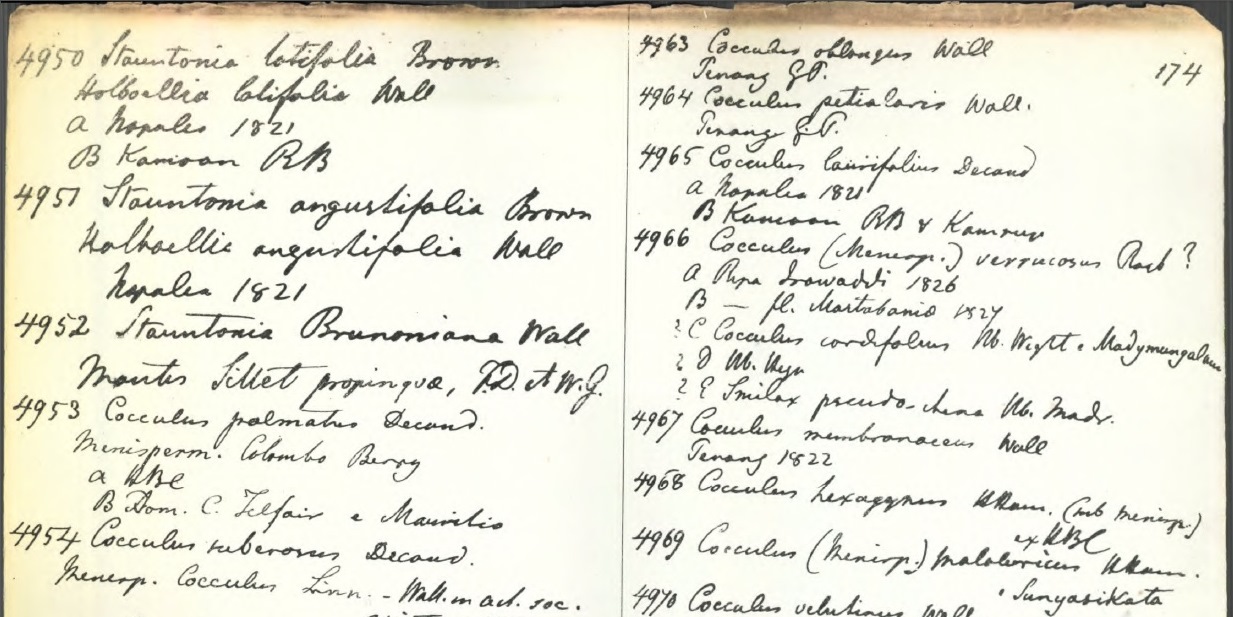 Screenshot of a page from Nathaniel Wallich's notebook, #4950 details the Holbeoellia latifolia plant, 1821, used with permission.

However, plant expert Robbie Blackhall-Miles writes recently in the Guardian that ‘Holboellia’ is named after Fred Louis Holboell, the superintendent of the Copenhagen Botanic Garden.

Talking to Global Voices, Uttam Babu Shrestha, who worked on Indian flora for five years and was assigned to search literature and validate plant names at Harvard University confirmed:

I don't know much about how it was named (species epithet). It was first published as Holboellia latifolia by Wallich in his Book ‘Tentamen Florae Napalensis Illustratae’ volume 1, section 24, page 16, 1824, and later, Wallich transferred it to Stauntonia latifolia in his catalogue (the name of the book is A Numerical List of Dried Specimens of Plants in the East India Company's Museum: Collected Under the Superintendence of Dr. Wallich of the Company's Botanical Garden at Calcutta)…Stauntonia latifolia is accepted name and Holboellia latifolia is basionym (synonym) and both are same species according to Wallich.

Maden writes about the irony of the sausage vine:

Not much can be found about this plant in research articles and books published in Nepal but more information is found in foreign countries. Nursery entrepreneurs can promote Gufala as an evergreen plant and a climber with beautiful flowers in the hilly cities. Its delicious fruits can be traded.

We plant and eat fruits of foreign origin like avocado and kiwi, purchasing them at expensive prices. However, we don’t even know that the foreigners are trading delicious fruits taken from our own jungles.