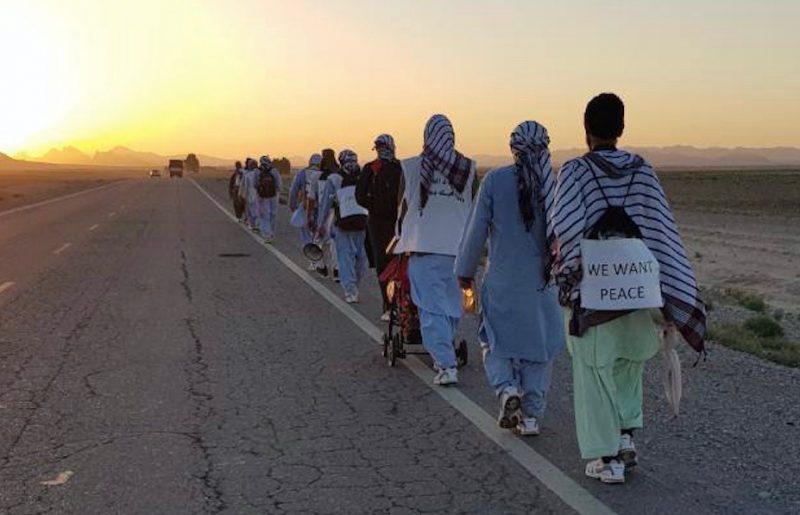 Photo of the peace march taken from the Etilaatroz news website and used with permission.

A total of 10,453 civilian casualties — 3,438 people killed and 7,015 injured — were documented in 2017 in Afghanistan. After Kabul, the capital city, it was residents of the southern province of Helmand that had it worst.

The #HelmandPeaceMarch movement led by youth from the province tells a story of fatigue from war and spotlights the next generation's search for a better life in a country riven by violence.

The march has now reached Kabul, after 700 kilometres on foot through four of Afghanistan's most insecure provinces –Helmand, Zabul, Ghazni and Maidan Wardak. On their way, marchers held meetings with villagers and explained the purpose of their march. They began as 7 people but acquired 59 others over the course of their journey.

The Peace marchers’ caravan arrived Kandahar. They moved from Helmand toward Kabul to seek peace and security for their homeland. These dears should be praised and welcomed. Their determination, honesty, and hard-work are admirable. I hope their voice will be heard and they will get the desired result.

Helmand is a strategic prize for both the government and the Taliban. It is often assumed that the local population of Helmand has reached an accommodation with the insurgents, who control more territory there than the government.

The march sought to to defy that stereotype.

This rural-born peace movement grew out of a Taliban bombing in Helmand in March left 15 dead and scores wounded.

The march from Helmand to Kabul has four main demands:

The marchers have been mostly welcomed warmly by people on their way to Kabul. Some even responded to their protest with flowers and songs for peace.

#Peace Caravan from #Helmand province has just arrived in Shajoi district & they will continue to walk capital #kabul. The have staged a “walk protest” & demanding immediate ceasefire between #Afghan Govt and Taliban.#LongMarch2Kabul pic.twitter.com/9qTiWEdfkm

#Helmand2Kabul and #HelmandPeaceMarch hashtags have widely shared on social media by men, women, boys and girls of all ethnic backgrounds.

#Hazara #girls in #Ghazni province standing in queue to welcome #Pashtun boys of #Helmand province, who stage nearly 600-km walk calling for peace. The Strong message is “#War & violence do not recognize ethnicity” & Everyone is victim of #violence in #Afghanistan @IntizarKhadim pic.twitter.com/W2YgqkRVA2

The Helmand Peace March is in Kabul now. Mom and I went to greet them. They are in front of the Mosque and Madrassa complex facing Habibia School. Seeing them was a moment of joy and healing for mom and me. Let’s welcome them to Kabul with warmth and support.

On June 19, the marchers met with President Ashraf Ghani, not in the lavish presidential palace in Kabul as officials initially offered, but on the street, where their movement began. The Taliban have so far refused to meet with them in any official capacity, the marchers said, although they have met and talked with fighters from the group along their way.