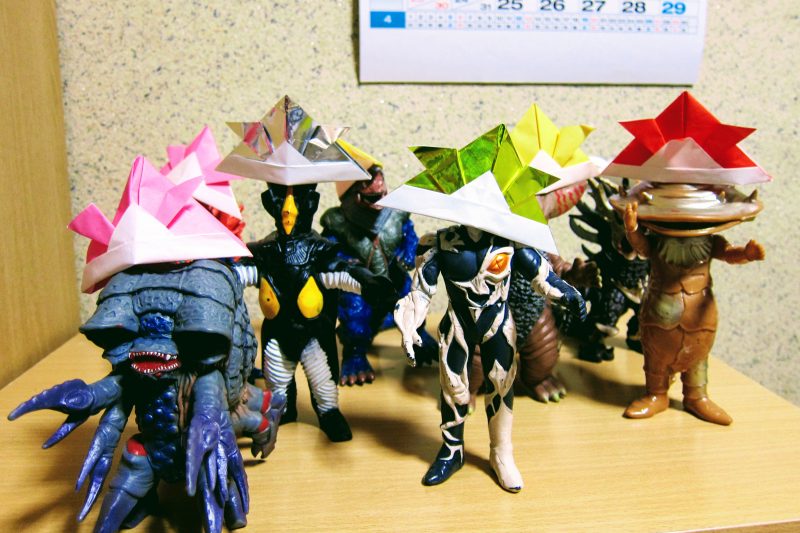 Monsters from the Bandai ‘Ultra Heroes’ toy line. All are based on Tsuburaya's ‘Ultraman’ storylines. Photo by Nevin Thompson.

Prolific Twitter user Mulboyne has unearthed a series of 45-year-old images of an official funeral for ‘kaiju‘ movie monsters that battle Ultraman, Japan's most famous superhero.

Preparing a kaiju funeral pyre in Jingu Gaien in 1973. pic.twitter.com/kYu1gXxU5H

Mulboyne makes frequent posts about Japan on Twitter, covering everything from what is likely the least popular rolled sushi to be sold in Japanese supermarkets to the top image search result for “gaijin” (“foreigner”, in Japanese) and trends in corporate rebranding.

In this case, Mulboyne is microblogging about Ultraman, a cultural phenomenon similar in many ways to the British television series Dr. Who. Like Dr. Who, the Ultraman series has been around for about 50 years, with numerous series occurring in multiple timelines and universes.

Over the years, the various Ultraman television series and movies have created an unstoppable merchandize juggernaut, selling dozens upon dozens of different models of Ultraman figurines and the space monsters they must defeat.

However, in the early 1970s, the Ultraman franchise was experiencing a bit of a slump, and some changes needed to be made. Mulboyne explains:

The background to this event is a run of misfortune at Tsuburaya Productions. Founder Eiji Tsuburaya died in 1970, and was succeeded by his son, Hajime. Hajime then died suddenly in 1973. Filming had also been plagued with accidents.

The company decided to hold a memorial service for the kaiju characters killed in its TV shows. It would also serve as a 厄払い (yakubarai – ceremonial cleansing) to put an end to the run of bad luck.

Similar to some Western practices, yakubarai is a very common folk practice in Japan for preventing or getting rid of bad luck, and otherwise exorcising evil spirits. In this case, Tsuburaya Productions wanted to start fresh, and so burned the life-size costumes of a number of the monsters that make up the Ultraman pantheon.

service was attended by the heroes who had vanquished the monsters. pic.twitter.com/SMwaea4cog

The service itself took place at the Futako-Tamagawaen Amusement Park, Actors brought in photographs of the kaiju characters who had been defeated and killed on the shows. pic.twitter.com/6Dz58rhaXx

This website has some more photos and details about the ceremony (in Japanese). The next installment of the long-running Ultraman series is set to debut on Japanese television in July 2018.