Gangs and trade wars: What kind of Mexico awaits the new president? 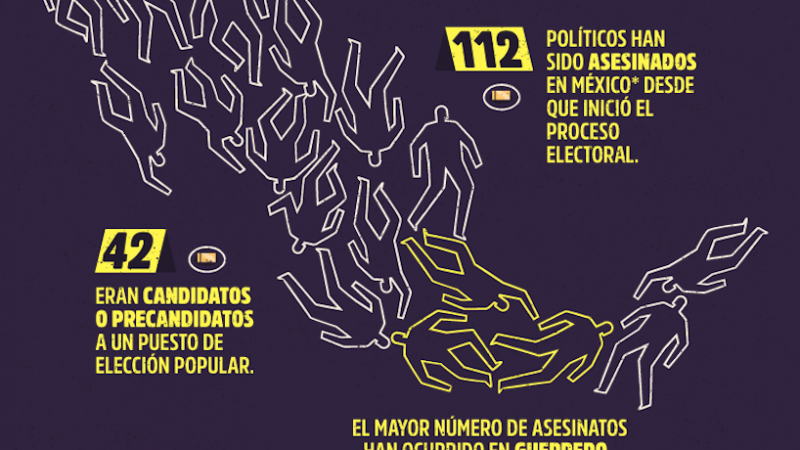 Detail from the graphic made by Pictoline. The numbers reflect the number of politicians assassinated since the beginning of the electoral process. “Mexico is living through the most violent electoral process of recent years and the statistics are alarming”. Image used with permission.

This is the third installment in our series on Mexico’s upcoming elections on 1 July 2018. In the first post we looked at the background of Mexican democracy after 70 years of a hegemonic party in power. In the second piece we looked briefly at each of the four aspiring presidential candidates. In this latest post, we turn our attention to the opinion polls and the general state of the country.

What do the polls say?

Following the three debates officially organized by the electoral authorities, there are approximately two weeks left until Mexicans go to the ballot box. The pollsters (Consulta Mitofsky, B&L, GCE to mention a few) and analyses of polling averages (Oraculus) all identify a clear leader. All consistently report Andrés M. López in the lead, approaching 50% of voting count, followed – although not closely – by Ricardo Anaya.

As we discussed in the last part of this series, Andrés M. López was put forward by the political party he founded (Movimiento Regeneración Nacional – MORENA) after having made two previous unsuccessful bids.

As noted in the first piece, Mexico has been suffering the consequences of an armed conflict since 2006 when then-president Felipe Calderón declared ‘war’ on organized crime. Since then the violence has only intensified. There is no truce nor cease-fire in sight — not even during the electoral period.

In this context, 112 political candidates have been killed in the run-up to these elections, as this graphic by Pictoline illustrates:

Tweet image: 112 politicians have been murdered in Mexico since the electoral period began; 42 were candidates or pre-candidates for a popularly elected post; the largest number of murders took place in Guerrero, Oaxaca, Puebla, Veracruz, and the State of Mexico

Tweet text: Mexico is living through the most violent electoral process of recent years. And the numbers are alarming.

“We can be sure that the criminals will win”

According to activist Orlando Camacho:

The violence is terrible, it is a reflection of institutional weakness; these elections are an accurate snapshot of the country’s reality in terms of violence.

A few weeks ago Eduardo Guerrero announced the sure winner of the 2018 elections in his article for El Financiero. He did not make projections with the data taken by the polls. He did not refer to the presidential election. He was speaking of the criminal organizations that, without formally appearing on the ballots, are deciding the election. We can be sure that the criminals will win, the security expert said. They will win because they are eliminating their enemies and because they have dominated those who will occupy positions in the town halls which are vital for their interests.

This climate of generalized violence has not been unnoticed by several international media outlets, such as El País which reported that two candidates in Oaxaca and Puebla (in southern Mexico) were killed in a 24 hour period.

While this is happening, Mexico is in the middle of renegotiating the North America Free Trade Agreement (NAFTA; TLCAN in Spanish) with its main trade partners and regional neighbours: the US and Canada.

The renegotiation is taking place following the presidential campaign promises of Donald Trump who assured his supporters that he would make new changes to further benefit his country.

President Trump claimed that Mexico benefits disproportionately from NAFTA and has made a series of insulting remarks about migrants. The most recent example was calling some of the people arriving in USA from the Mexican border “animals”.

However, returning to the matter of economics, Mexico’s trade situation has become difficult due to USA’s imposition of tariffs on imported products, ordered by Trump, which provoked retaliatory measures by Mexico.

Some media outlets in Mexico, among them SinEmbargo, have described the situation as a “trade war”.

Stay tuned for the next episode in the series, when we look at the Mexican presidential elections from the perspective of press freedom and discuss the heated exchanges which have taken place on social media.