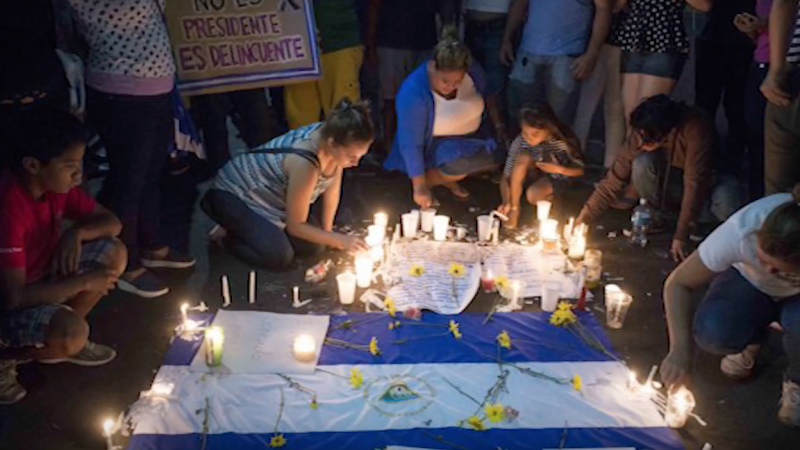 Screenshot of #SOSNicaragua video shared by The Nicaragua Press newspaper on its YouTube channel.

In the two months since April 18, Nicaraguans have gone from holding protests [2] against several unpopular governmental decisions to organizing what now appears to be an actual popular uprising based on peaceful resistance. Universities [3] have been occupied, highways [4] blocked, general strikes [5] launched and entire neighborhoods surrounded by makeshift barricades [6] mounted by residents to prevent pro-government “parapolice” groups from entering [7].

According to protesters, [8] the rapid evolution of this grassroots movement was spurred by profound indignation [9] over the government's severe repression of the demonstrations. At the time this post was edited, there had been 178 people killed [10] and another 1,400 wounded.

The majority of the confirmed deaths (the real number could be higher) were from gunshot wounds to the head, neck and body. [11] Human rights defense groups such as the Nicaraguan Center for Human Rights and Amnesty International have called these deaths “extrajudicial executions [12]“.

Events have quickly escalated and many allegations are circulating online. From different parts of the country, videos and reports have been shared on Facebook and Twitter [13] showing armed groups intimidating and attacking protesters or people who refuse to collaborate with them.

Over the weekend, a family with two children burned to death in a house set on fire by armed groups. Accusations are flying, but relatives and witnesses say parapolice groups linked to the government of President Daniel Ortega and Vice President Rosario Murillo are responsible.

The view from human rights defenders: “Everything is upside down”

While the news focuses on what is happening in the streets and on the attempts to create a national dialogue that seems to envision a change of government [18], Global Voices reached out to a group of activists who amid the chaos are working together to document accusations of human rights violations occurring in the country.

To better understand their labor and this dimension of the conflict, we interviewed “Marina” (her name has been changed for safety reasons), who is a cyber-activist feminist, lawyer and expert in gender and development.

She is currently collaborating with the Nicaraguan Center for Human Rights (CENIDH in Spanish) in the city of León. CENIDH is an organization that promotes and protects human rights. It was formed by Nicaraguan civil society in 1990, a post-war era [19] during which the country was transitioning to a democratic government.

In the wake of the political crisis that began on April 18, 2018, and the widespread repression throughout the country, CENIDH joined feminists like Marina in León to begin to record accusations from citizens coming from the western half of the country.

Global Voices (GV): In what context did you all begin to document accusations of human rights violations in León?

Marina: At this time, there is a profound dismantling of institutions of order and justice, and of basic rule of law. A climate of threat and terror exists in society. Everything is upside down. The National Police have abandoned their duty to protect the people, and are instead repressing and assassinating citizens. The Institute of Forensic Medicine has foregone forensic exams and falsified reports. The Public Ministry is dedicated to making up charges against innocent citizens to cover up crimes committed by the National Police.

Victims and their families continue to be under siege. Several of them have been forced to withdraw their accusations. And for us, it is even more complex, because human rights defenders are also subjected to persecution and intimidation.

GV: When you receive an accusation, what process do you follow and how is the workload managed?

Marina: We don't have an office. We work from our homes and in other communities in the western half of the country, in places such as churches, hospitals, locations that similar organizations let us use, cafes, etc. In several cases, and out of fear of reprisal, the victims send us recordings of their accusations. [In those cases] we don't get to see them in person. We transcribe the recordings and send their case file back to them via email for verification or to add more details.

The citizens only trust in human rights institutions. For us, this is a tremendous responsibility and commitment. We believe that at the present time, after the Catholic Church, institutions that defend and promote human rights have the most credibility.

GV:  What kinds of testimonies are you gathering? What are the most common accusations made by the people who contact you?

Marina: The most serious testimonies have been a report of a heinous murder and sexual violence, and accusations of murder. The most frequent are physical aggression, serious aggression by the police, cases of young people bring shot, repression of the right to protest, death threats, intimidation, coercion of public employees who have come to us to make accusations, torture… We cannot speak a lot about the particular cases, only of general characterizations, to maintain confidentiality.

“Legal language does not address trauma”

The work of those who defend human rights is very tied up in condemning violations and supporting the people who suffered the trauma. At the same time, it is necessary to collect testimonies, document the accusations and create case files — an effort that is difficult to understand from afar and in the short term, but will be fundamental in future processes of reconciliation, of creating memory and of revitalizing institutions.

GV: At this time, what are the legal possibilities for victims?

Marina: The legal possibilities are next to none. The act of making an accusation is a gesture of symbolic justice. It is the first step in facing the trauma. And we know that legal language does not address trauma.

We believe that the importance of our work is based on the creation of a case file. Right now, there is very little that can be done. My colleague tells me that her dream is for us to create a ‘National Registry of Victims of State Terrorism’, such as one recently created in Guatemala with the historical sentence in the Molina Thiessen case [23]. Guatemala, in these areas, and among these winds of change, has been an important example in Central America.

We want to help tell this story together so that it never happens again. It is incredible that only 39 years ago on these same dates [24], we were on the eve of defeating one of the longest and cruelest dynastic dictatorships [25] seen on the American continent.

GV: What does this work mean to you? How do you handle it emotionally and what motivates you?

Marina: The testimonies are difficult. We process them, listen to them, and digest them. It is the most Christian thing I have done in my life: “love your neighbor as yourself”. It is a dangerous and risky job. We don't have the necessary resources and funds. The defenders of human rights are the last ones to listen to our own bodies and grievances. There are victims of this system on all levels. We are victims who assist victims.