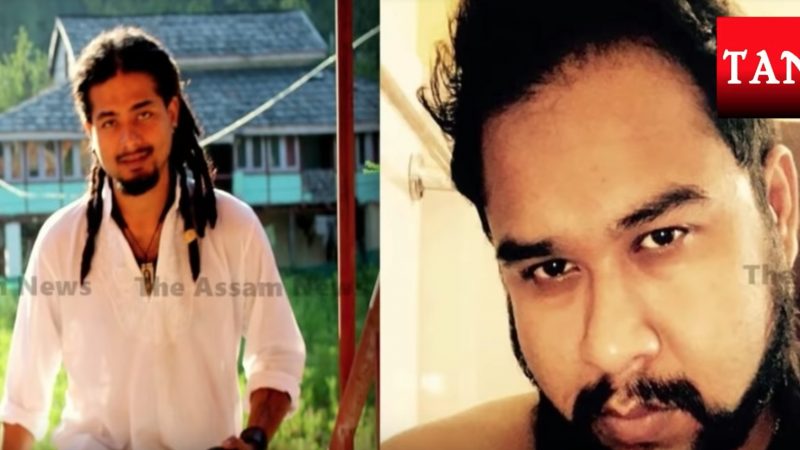 Two men lynched on suspicion of being child abductors in Karbi Anglong [2] in Northeast India. Screenshot via YouTube by The Assam News.

Mob lynchings in the state of Assam in Northeast India are nothing new. In February 2018, two Sikh men were killed [3] in a mob lynching. A video of the attack that went viral the following month.

In June 2018, Assam has seen about four separate incidents of mob lynchings [4], fed by rumours of witches or child abductors that spread via Facebook, WhatsApp and word-of-mouth.

One of the attacks in Assam [5], in the Karbi Anglong [2] district, resulted in the death of two innocent young men from the city of Guwahati [6]. They were out for a walk in Kangthilangso [7] when they were killed by a mob.

On 8 June 2018, Nilotpal Das and Abhijeet Nath were returning from Kangthilangso, a picnic spot with a waterfall in the vicinity, when they were attacked near the Pajuri Kachari village in the Karbi Anglong district.

According to reports, a man spotted them in their SUV and started shouting that Das and Nath were child abductors. He threw stones at the car and called for other people for help. A crowd of about 200 villagers [8] gathered around the car, forcing the two friends out of the car and beating them to death.

Pajuri Kachari village and the surrounding area had reportedly been living in fear because rumours regarding “xopadhora” were being spread. Xopadhora is a myth [9] about a child abductor who, according to some versions of the story, has long hair and sometimes carries bags to put children in. Other rumours [10] suggested that two Bihari [11] men abducting children.

Since central Assam has the highest number of child abductions and trafficking [12] in the state, people there are understandably sensitive to such rumours.

A video of the mob lynching was circulated on social media, in which Das is seen shouting out, “I am an Assamese,” in an attempt to convince the attackers that they had the wrong man. The two were beaten to death [7].

Demands for justice and an end to lynch mob culture

Residents of Assam were quick to respond with rallies across Guwahati [6], the capital of the state. These public demonstrations demanded speedy justice for Das and Nath, stricter anti-mob lynching laws, and action against police officials under whose jurisdiction the incident fell.

A Facebook group called “Justice for Nilotpal and Abhijeet” [13], which garnered around 60,000 members in 24 hours [14], organized a candlelight march. A silent protest in Guwahati turned violent [14] with the police resorting to the use of a lathicharge (baton) [15] to control the situation.

Many also expressed their outrage on social media:

The Karbi Anglong incident showed a true message. We don’t need DIGITAL INDIA, but a LITERATE INDIA. Because of which, illiterate people are sharing the video through their social sites instead. We don’t need such digital india, but first a Literate India #KarbiAnglong [16]

Vigilante justice, mob lynchings are now normalised in India. It is barbarism that is rarest of the rare, brings out the most primitive instincts of men. Unless there is exemplary (capital) punishment in such cases mobs will feel brave enough to kill anyone anytime. #KarbiAnglong [16]

Deeply pained at the hapless incident in Karbi Anglong where two young artists Abhijit Nath and Nilotpal Das were brutally killed. My condolences to the bereaved families.The Govt should take stringent actions against the perpetrators of this henious crime.

I am distressed at an unfortunate incident in which 2 young men Abhijeet Nath & Nilotpal Das were killed after they were mistaken as kidnappers.

The spiralling cases of rumours through social media & @WhatsApp [20] pose a threat to society & we all must get vigilant to curb it.

Candle light vigil last night in #KarbiAnglong [16] by Karbi Students’ Association, KNCA and many other organizations, demanding justice for #NilotpalDas [22] and #AbhijitNath [23] and an end to lynch mob culture all over the country pic.twitter.com/o2cPqeSUCt [24]

A few illustrations related to the victims and their assailants made the rounds on social media as well:

a tribute to two beautiful souls we lost. (two things at their edge of extinction – Nature & Humanity) #JusticeforNilotpalandAbhijit [28] pic.twitter.com/9QVOTlMphp [36]

The family of Das urged people [44] to not politicize the issue and not to fall prey to other rumours.

Punitive measures put into action by the government and the police

In the subsequent police investigation, many people were identified as having involvement in the killings and more than 20 arrests have been made. Police accused a man named Alphajoz Timung the instigator of the mob [45] and have taken him into custody.

According to a statement of the director general of police [46], after being arrested and interrogated Timung revealed that he had an argument with Das and Nath after calling them xopadhora. The two left in their car after the argument. But Timung's anger supposedly led him to tell the villagers that the two had taken a child along with them.

This spread quickly and villagers stopped Das and Nath a few kilometres away.

In addition to the 20 people arrested for participating in the mob, at least 40 have been arrested  [44]on accusations of spreading child abduction rumours or publishing hate messages on social media.

Chief Minister of Assam Sarbananda Sonowal tweeted his condolences to the bereaved families:

Deeply anguished at the unfortunate incident in Karbi Anglong where two young artists Abhijit Nath and Nilotpal Das were killed. My heartfelt condolences to the bereaved families. May the departed souls rest in eternal peace.

Later, the Chief Minister’s Office tweeted about a meeting being held to discuss mob lynchings and social media rumours. The result of the meeting was a program called “Sanskar” that aims to create awareness regarding superstitions (“sanskar” can be roughly translated to “traditions”).

The Office later tweeted that authorities would also look into skills training for 5,000 youths from all districts of Assam to tackle superstitions.

In the meeting, it was also decided that 5000 youths from all districts of Assam will be imparted skill training in Guwahati to create awareness against superstitions.

Mob lynching is a serious issue that isn’t restricted to the state of Assam. In Aurangabad [49], Maharashtra, a western state in India, two men died in a case of mob lynching that was also fueled by rumors spread through WhatsApp messages. Any action taken against mob lynching will need to be done with the entire country in mind.