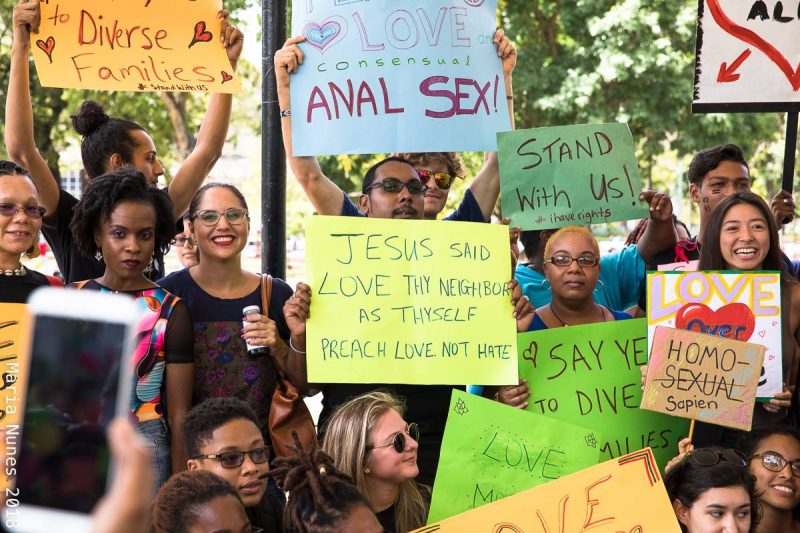 A cross section of the crowd outside Trinidad's Hall of Justice in Port of Spain on April 12, 2018, after the high court ruled in favour of Jason Jones, who brought a case against the state claiming that the country's “buggery” law was infringing upon his constitutional rights. Photo by Maria Nunes, used with permission.

The religious leaders haven't always gotten along: In May 2016, Maharaj, known as a controversial figure, told Gordon's predecessor, Joseph Harris, to “mind [his] own damn business” when it came to the issue of child marriage, saying it was a matter for the Hindu community and the state. Child marriage has since been made illegal in Trinidad and Tobago.

But the group has found common cause in rhetoric about biology and gender, “Adam and Steve”, and the “fabric of society” — the traditional family structure — being “at risk”. Jason Jones, who brought the successful case against the state challenging the “buggery” law, called their position “disgusting”.

At a press conference “facilitated” by a new non-governmental organisation called Rebuild TT, the religious leaders called on the country's politicians to amend the Marriage Act through a special majority, in order to block the legalisation of same-sex marriage. They are also against any amendments being made to the country's Equal Opportunity Act.

The Roman Catholic archbishop was reported to have said, “A very vocal minority should not be able to get their agenda through.” He also claimed that his group's views reflected the opinion of 90% of Trinidad and Tobago's society, but did not cite any source for those statistics.

Judging by the widespread criticism online, social media users must comprise the remaining “10%” — the majority of whom feel that the religious group's priorities are misguided, and who were irked at hypocrisy of its stance, given the leaders’ personal histories and the histories of the institutions they represent.

Doing what you can to reduce murder, child abuse, domestic violence, gang warfare, homelessness, threats to free speech, income inequality, corruption…nah, more important to use your leadership position to say who should or shouldn't be allowed to love each other

Today in Trinidad and Tobago, dozens of same sex couples told each other I love you, and went about their days.

Also, a man nearly beat his estranged female companion to death before killing himself.

Haynes’ post was widely retweeted and posted on various other social media platforms. When challenged on his criticism of the religious leaders by another Twitter user who asked whether having a different belief system is tantamount to being intolerant, he replied:

If you are actively trying to stop being from getting basic human rights then yes. Yes you are. https://t.co/faXJZVQwDE

Facebook user Patricia Worrell was also quite put off:

And on the news tonight, what do I see but Archbishop Jason Gordon holding hands with Sat Maharaj in a common stance of religious leaders against gays, who are, they say, degrading the moral fabric of our society.

In a totally unrelated story, I see Pope Francis has accepted the resignation of Chilean bishops who were involved in covering up a child sex abuse scandal

However, it seems the clergy of the Catholic Church have been contributing their own widow’s mite to moral fabric disintegration in different parts of the world, Jason….How will you act on that? What do you say?

Activist Tillah Willah posted a photograph of the band of religious leaders, commenting:

Like heroes from a fairytale! Our very own dwarves Backwardo and Rapey, Pedo and Gropey, Grabby and Hatey. Here they are, mustering the remnants of their erectile tissue, to dig a hole back to the surface. Past the destroyed lives of child brides, the broken bodies of thousands of women forced to pray for their abusive partners, generations of boys abused by priests.
We're saved y'all. We're safe.

Then, of course, there were the memes. One spoofed the “Justice League” movies, calling the group the “Injustice League: Religious Leaders Unite to Divide T&T…Once and for All!”:

Another adapted a scene from American music artist Childish Gambino's popular video “This Is America“, instead showing the archbishop holding a gun to a rainbow equality flag:

Finally, in one of the most eloquent posts about the issue, poet Shivanee Ramlochan wrote:

Faulty men have run religion since we could trace the sign of the cross in the rich, lifegiving dirt. Men have always been asking themselves, ‘What Would Jesus Do?’, then they have done the opposite, in Jesus’ blood-consecrated name. In Shiva’s. In the Prophet’s. The men who spoke compellingly of the need to refuse your rights today – those men not only work at cross-purposes to each other, they work at the ultimate cross-purpose: a refutation of the love that a benevolent God promises his children. They may speak for the ordering of their religious houses. But we know that that is not where you find God. They may denounce the worthiness of your moral constitution, and declare you members of a fringe, rogue group, one with a collective big mouth. But that is what maximum oppressors have always done. With muzzles. With inverted swastikas. With the promise of Hell, and the punishment of disenfranchisement, disrepute, and death. And everywhere, from Stonewall to Georgetown, we who are called rebels raise our hands, our persistently queer fists to the firmament from which raineth the rain of God, equally on us all, to say, you can’t kill us out of the rights we deserve. Some of us. Not all.

We are much more than ten percent. […]

My dear, queer friend, when you decide how you love God. Whether as a man who died on a cross. A serpent-tongued, blackskinned Goddess necklaced by skulls. A samaan tree. […] When you find your God, and your God finds you. When you commit yourself to that loving service, in all its light, dark and complication. No holy man can lay his tongue against you without also revealing the rot of his heart. No judgement issued from your body of worshippers – who, you plainly see, are not your family in love, but your acquaintances in enmity – can so much as blister the smallest dot on your soles.

They may throw you out. They may disown you. They may raise their hands against your body and reject you at the doors to your place of work. But if you want him. If you want her. They cannot take your God from you. They can only rob themselves.

Trinidad and Tobago's government has said that it will appeal the sodomy law ruling. A further hearing on the matter is scheduled for July 4, 2018, and Jones remains optimistic that the Equal Opportunity Commission (EOC), which was supportive in his case, will be instrumental in the move for inclusion of vulnerable communities in the Equal Opportunity Act.