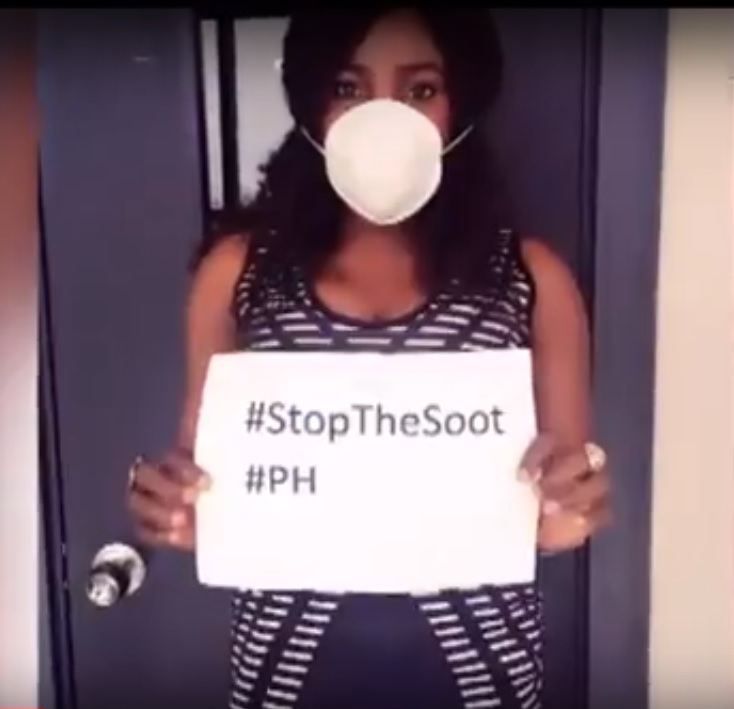 A screen shot from #StoptheSoot Campaign in Port Harcourt, Nigeria

Port Harcourt, the center of Nigeria's oil industry, has long been choked by thick, dusty, toxic soot that people fear is hurting the health of its million or more residents.

The poisonous air has led residents to constantly clean up the soot from their cars and homes and wear protective gear to take necessary precautions, sparking public consciousness about the severity and scope of this crisis. Saatah Nubari who spoke with CNN said:

The increasing level of soot in the air and environment of Port Harcourt is largely due to two factors, the activities of security agencies who burn off illegally bunkered petroleum products and the activities of illegal oil refinery operators who run their operations from the creeks and hinterlands of some of the communities around and surrounding Port Harcourt. It has been established that soot causes cancer and lung disease and maybe the second biggest human cause of global warming. It has also been established that long-term exposure to urban air pollution containing soot increases the risk of coronary artery disease.

As residents across the city raise their concern about the environmental crisis, Nigeria's Ministry of Environment declared the air pollution as an “emergency situation” early last year, but put the blame on illegal crude oil refineries and the burning of tires.

The blame game has neither stopped the soot nor made the air cleaner, prompting netizens to voice their rage on Twitter using the hashtag #StoptheSoot:

#stopthesoot, it's not just PH, it's almost everywhere in the SS, this is terrible pic.twitter.com/GJBVHZikjw

Another shared this picture of soot covering his house:

Dis is what we inhale here in Port Harcourt! OMG… Cleaning my room this morning! @WHO @NGRPresident #stopthesoot
We are dying here @CNNAfrica pic.twitter.com/GbB3WEKt2s

#StoptheSoot has morphed from a Twitter hashtag to a full-blown environmental movement demanding clean air and a safe environment throughout the Rivers State region located in the Niger Delta. The advocacy group has taken to the streets to protest and has held meetings with the Rivers State government.

Ebenezar Wikina, a member of the group explains:

The funniest thing is people who are freaking out the most about the soot are people who just got to know about it only few weeks or days ago. The soot thing was first noticed by Port Harcourt residents as far back as October 2016. Yes, October…. Although the Commissioner for Environment, Prof Roseline Konya, eventually came out to engage citizens through various radio stations in Port Harcourt, but in the heat of our advocacy the authorities were silent. The best we heard was that testing was currently being done. Testing, Testing. Testing what? Is it a microphone? People were vexed! The hashtag trended for days as people kept showing evidence of the soot around them — at home, at work, and even in their nostrils.

It was at this time the Port Harcourt Global Shapers decided to call for higher powers. We started a petition on Change.org (which at the moment is closing in on 300 signatures). We have taken it further by informing [United Nations] UN Environment officially about the issues. Of course, the UN cannot come down to solve our problems for us but maybe if the international community is aware, the challenge we’re facing will be handled with more urgency.

The movement calls for urgent and tougher actions to protect the environment, asserting that a safe and healthy environment is key to sustainable development and human rights.