On being black in the white-dominated aid industry 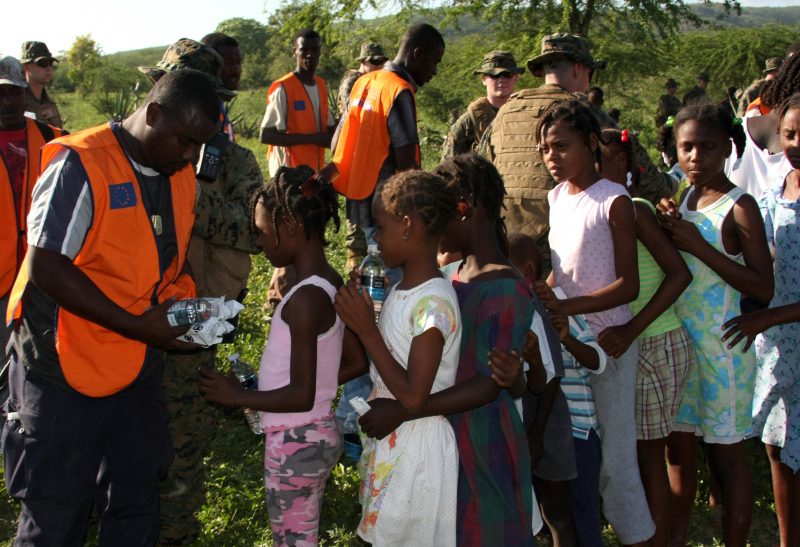 I am a firm believer in making journeys, taking steps far out of my comfort zone for the sake of learning and seeking new experiences. That rule applies to both physical and intellectual spaces. So, when an opportunity for a short-term assignment with a major international non-governmental organization (INGO) came up, I packed my bags and headed to Europe.

This wasn’t much about the big money we are made to believe awaits you there, though the pay was decent. The thing no one prepares you for, and which is rarely talked about in-depth is what it means to be an African in an institution operated by a white majority.

Growing up in Uganda and working mainly in the Great Lakes region of East Africa, I had not much of an idea of what this would mean. While I was aware of the dynamics in the development sector back home, as satirically depicted in the film “N.G.O – Nothing Going On” by Arnold Aganze, a filmmaker originally from Eastern Congo, I was yet to experience life as a minority.

Internationally, we have seen a few shake-ups in the last few months since the revelations of the Oxfam sex scandal in Haiti, where international NGO workers paid local women for sex. Following this storm and few other high-profile abuse cases in the international aid sector, Angela Bruce-Raeburn, the former Senior Policy Advisor for the Humanitarian Response in Haiti at Oxfam America penned one of the most relatable responses.

Bruce-Raeburn’s ‘But wait until they see your black face’, which examined inclusion and racism in the sector, resonated strongly with me. And the responses of other black women in the sector about the mental gymnastics and marginalization one has to engage in to survive were all too familiar.

I have consulted with international agencies at different times, being was well aware of the need for local people to have agency in these organizations. I was already outspoken regarding the caricatures peddled by the media about people in need. This current opportunity also offered me a chance to immerse myself in one of the greatest challenges states across the world are facing—forced migration. But neither my education in gender issues and media nor my experiences during short visits abroad and one year of living in a foreign country could have prepared me for this scenario.

I would later learn that I had arrived at a time when there was a push for diversity (not inclusion). My supervisor showed me off to management, wanting to be recognized for having brought in a qualified African woman. A few months later the all-white communications department acquired two brilliant recruits, a Kenyan and a South Sudanese. Once the supervisor stopped the organization’s only senior African manager in the corridors and called the three of us over to show off his African recruits. Perhaps this was how people in that agency received credit, but this was the first sign that things would not go well. We exchanged awkward smiles with the manager and went back to work. That was the first time I had ever been singled out in a workplace simply because of the colour of my skin.

When one of the African recruits could not deliver a piece strategy at short notice—an unreasonable demand given that the person had not even finished orientation—the supervisor came to my office and asked me to tell her that “if she did not have her strategy by end of the day she would be on the next plane back to her country.” Before this day, no amount of bullying from the supervisor had managed to break me. But this instance of blatant racism and insensitivity made me close my office door and weep.

I wept because this African woman had escaped war with her sanity intact and had come with a Master’s degree to offer her skills, only to encounter a man like this. I wept because I could not bring myself to break the news to my African colleague, believing it was my duty to protect her from such vileness.

The supervisor in question was a white European male who had never been to Africa or the Arab world, but was considered ‘well suited’ to speak about experiences of migrants—and you know which group makes up a good number of migrants: “poor Africans”, as I’ve heard on several occasions. To this man, we were simply African informants, not people with skills and rightly deserving of our jobs.

To make matters worse, there was the murky situation with the only white woman on the team. I say murky because everything this woman brought up at meetings had to be taken seriously. Once this woman suggested I attend a certain meeting which I didn’t think was a priority, as I had lots of work on my table that day. Within the next thirty minutes, the supervisor was at my door demanding that I go, telling me that I could not say no to her. I was living amidst white privilege. The role this white woman played in this racist and sexist environment was all too clear. She was the one who decided whether your contract got renewed, as my Kenyan colleague learnt the hard way. I cannot count the number of times I was called after work and bombarded with hailstones of abuse because one thing had not been executed on that day. And God forbid if someone in another department complimented your efforts.

Staff meetings became predictable. The supervisor consistently expressed animosity towards female managers—who were all white—and did not shy away from making sexist comments about these women. While most mid-level managers were aware of the abuse this man meted out, there was no opportunity to address this. So, while the work was interesting and I was learning a lot, it came at the price of having to cope with ignorance, sexism and racism.

After six months I got a contract with another department, but he demanded that he remain my supervisor. My having got a contract without his sanction only drove him to the worst behaviour. I shared an office with another white male communications officer who took his calls on the speakerphone, and the supervisor would call in talking about me and calling me all sorts of names. I learned from others that their plan was to drive me out, though that was not of course lost on me.

But I had built a digital system from nothing. I had been able to build relationships with staff in country offices that usually tremble at the mention of the head office. But all this amounted to nothing unless I was grateful and obedient to this man. As a result of this blatant bullying and abuse, two colleagues left their posts; one changed departments and another was denied a contract for not obeying the department’s white female head.

We tried in vain to report this racism and sexism. We were told by friendly senior colleagues that it was impossible to do anything, as “he had good connections with the big boys at the top”. Also, it was useless to go to the Ombudsman. Even the one newcomer in the human resource office assured me it was useless to make a report as a consultant, as I would risk leaving with a bad record.

Given these hindrances and limitations, I decided after one year to leave the organisation rather than continue flogging a dead horse called due diligence and justice. But damn, was I depressed. Women make up less than 30 per cent of the workforce in an industry where women are the majority affected, and I hope that the conversation around #AidToo starts revealing the extent of racism and abuse in the development sector. Those in charge need to work towards solutions and inclusion—not just in the sense of increasing numbers and getting minorities and women in positions of leadership, but by ensuring that there are genuine policies, practices and avenues for preventing such abuses of power.

A version of this article was previously published on the African Feminism blog.