‘You cannot be a liberator and a thief at the same time': Video shows Russian forces disciplining Syrian soldiers for looting 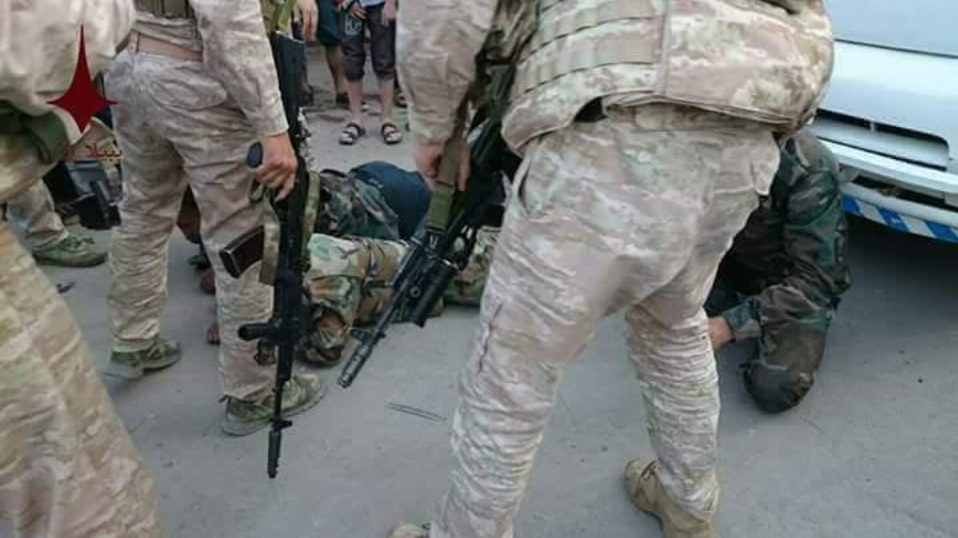 In a scene of public humiliation, the soldiers were pictured lying face down in the street near flattened buildings, with rifles pointed at their heads. According to reports, the soldiers in the video were arrested afterwards, amid Russian warnings of a harsher punishment should future looting occur.

This is price Bashar pays for Putin’s protection.pic.twitter.com/fBnW6fc5Lh

Scenes of looting have not been limited to Babila.

In mid-April, the Syrian military, aided by Russian forces and Palestinian militias, began an offensive to take control of the al-Yarmouk camp for Palestinian refugees in Damascus and the adjoining al-Hajar al-Aswad area, which were at the time in the hands of ISIS and the Nusra Front.

After a month-long battles, the Syrian army declared Damascus and its surrounding “entirely secure” after forcing ISIS fighters to flee their last holdout near the capital.

Following the victory, there have been numerous reports that forces affiliated with President Bashar al-Assad's government went on a looting spree. Social media have been inundated with pictures and videos showing soldiers carrying away refrigerators, washing machines and furniture.

According to reports, the soldiers in the video were arrested afterwards, amid Russian warnings of a harsher punishment should future looting occur.

Known in the colloquial Syrian as “taafish”, the practice of looting property belonging to residents of conquered areas has flourished in recent years. The furniture is usually sold at stolen-goods markets, where some people seeking to recoup what they've lost find themselves obliged to buy back their own things at high prices.

In some areas these markets have sectarian overtones, like in Homs, which witnessed some of the most brutal crackdowns by the government and where one of the markets was called “Souq al-Sunna” (The Sunnis’ Market) in a crude allusion to the sect of the locals whose properties had been looted.

According to locals from southern Damascus, after the military offensive was complete they watched as their property was stolen in broad daylight. These reports didn't simply come from opposition supporters, but from the pro-government population too.

A video posted on YouTube shows a journalist affiliated with Liwa al-Quds, a pro-government Palestinian militia which took part in southern Damascus battles alongside the Syrian regime, engaged in a heated altercation with forces tied to the Syrian regime who he found looting his own house in al-Yarmouk camp.

There have even been reports of the government-affiliated Shabiha militants killing two children who protested against the looting.

Some of the looters cite financial hardships, largely considering it as a legitimate reward for their combat efforts or find justification in the low salaries they are paid by the regime.

‘Who is the one calling the shots?’

The irony that many found in the incident of Russian soldiers punishing Syrian soldiers caught looting was multilayered. First, it set off sarcastic comparisons with scenes of degradation and torture meted out by regime forces against opposition activists.

Some on social media pointed out a striking similarity between the video and a famous one showing security forces kicking and humiliating detainees in al-Bayda town in the coastal city of Baniyas in the early days of the revolution in April 2011. However, some pro-regime accounts have dismissed that 2011 footage as fabricated, claiming it shows Iraqi Kurdish Peshmerga fighters, not Syrian soldiers.

Online conversation surrounding the latest video also argued how it is humiliating to the Syrian government, as it highlights how Russia's clout in Syria is increasing, about three years since it intervened militarily in support of Assad.

Russian military police in south Damascus arrest elements from the regime forces on charges of looting houses. Who is the one calling the shots?

The second irony was that Russia appears to be casting itself as a protector of the same people whom its forces have either killed, maimed or made homeless after a month-long airstrikes against opposition-held areas in southern Damascus.

Now that the dust of battles is settling in Damascus and its surrounding areas, concern is high over the state of law and order in future Syria. There is a proliferation of militias and unchecked spread of arms in the hands of non-state military factions, including Russians and Iranians. And in the early aftermath of its military victory, the regime seemed unable, or unwilling, to curb widespread looting.

They claim to be liberating us from terrorists but are looting our belongings and no one can stop them. You cannot be a liberator and a thief at the same time. This is the law of the jungle. I wonder what future awaits us.

Maram quoted a famous saying by George Orwell from the British author's famous novel “1984”, which she said encapsulates Syria's future as she sees it: “If you want a vision of the future, imagine a boot stamping on a human face – forever”.