Meet the candidates competing to be Mexico's next president 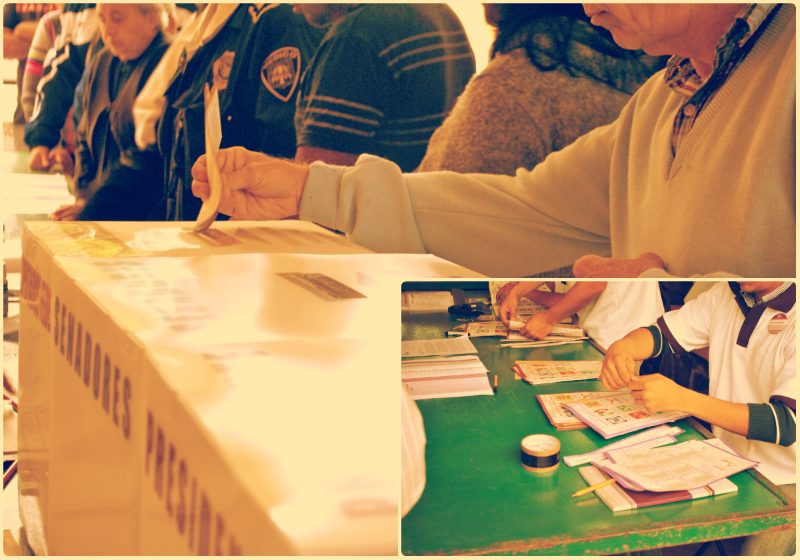 Scene from a polling booth in Mexico. Images by ProtoplasmaKid used under the licence CC-BY-SA 4.0.

This is the second in a four-part series on Mexico’s upcoming elections on July 1, 2018.

In Part I, we briefly discussed the history behind elections in Mexico and the background to the upcoming polls. Now, we take a look at the candidates aspiring to run a country where citizens – as in many other parts of the world – are disenchanted with the political class in general, and particularly with the various scandals of excesses and corruption in recent years.

Without further ado, we present the contenders to become the next president:

Restoring peace means that people have a secure and well-paid job. For that reason, in my government we will generate the conditions for more investment and for all morelianos [inhabitants of the Mexican municipality of Morelia] to live better

Ricardo Anaya Cortés is the standard bearer of the Partido Acción Nacional (PAN) in coalition with the Partido de la Revolución Democrática (PRD) and the “Movimiento Ciudadano” (MC). This pragmatic alliance has been criticized for uniting a conservative, a right-wing party (the PAN) with a party identified as liberal or left-wing (the PRD).

Anaya, 39 years old, is the youngest candidate. He has never held a popularly elected post in the executive branch of government, but he served as a legislator at the local and federal levels.

His detractors have made mediatized accusations of corruption against him, for having owned an industrial-use building that was implicated – according to his critics – in a money laundering case.

Tweet image: We are not going to elect a candidate, but a president, I have no doubt and neither do you that I am the best.

Without being formally a member of the Partido Revolucionario Institucional (PRI), José Antonio Meade Kuribreña was nominated as the party’s presidential candidate. He has held several posts in public administration, both during the PAN’s period in power and during the presidency of the PRI’s Enrique Peña. Among them, he was notably Foreign Affairs Secretary, Finance and Public Credit Secretary, Social Development Secretary, and Energy Secretary.

As well as being the PRI’s candidate, he also represents the Partido Verde Ecologista de México (the Green Ecologist Party of Mexico or PVEM) and the Partido Nueva Alianza (New Alliance Party PANAL).

Although Meade has not been directly accused of corruption, he headed the Ministry of Social Development which was implicated in a massive embezzlement scheme revealed by independent journalists and an anti-corruption non-governmental organization in an investigation known as “La Estafa Maestra” [the Master Fraud]. Additionally, he was head of the Ministry of Energy for a short period during the preparation of constitutional reforms regarding energy.

We will win on the first of July and we will not let down the people. Power only makes sense, and becomes virtuous, when it puts itself at the service of others.

In this contest, Andrés Manuel López Obrador is representing the political party that he founded: Movimiento Regeneración Nacional (MORENA). He was a presidential candidate twice before. In the 2006 elections (as a PRD member) he declared himself the “legitimate President” in response to the unfavorable result.

López (also known as AMLO for his initials) was head of Mexico City's government. During his term, numerous cases of corruption came to light that were linked to his closest colleagues; one of them, René Bejarano, was surprised in the act of receiving millions of dollars in cash, which was video recorded and released in a national news broadcast.

López’s proposals are the best known and most easily identifiable. They include providing possible amnesty to some offenders in the context of the armed conflict and reversing controversial reforms undertaken during the current president’s term, especially those in energy and education. Critics see him as the most populist of the candidates.

While MORENA is seen as a liberal or left-wing party, in the presidential race it has found itself in coalition with the Partido Encuentro Social (Social Encounter Party PES), notorious for its ultra-conservatism.

Tweet image: Impunity is born with the judges and magistrates of this country.

Tweet text: It is necessary to clean the corrupt system from the top and I will do it. Why? Because Mexico deserves justice, that we listen to the citizen and above all, that they can feel calm and confident in their authorities. Give a RT if you want to end the corruption.

Jaime Heliodoro Rodríguez Calderón, better known as “El Bronco” presents himself as an independent candidate, despite his previous affiliation to the PRI. He currently serves as the governor of Nuevo León, a post which he also came to as an independent.

“El Bronco’s” inclusion on the ballot has been much discussed, as the electoral authorities noted several irregularities in his compliance with the legal requirements for this candidacy. Ultimately, it was the judiciary that ordered Rodriguez be qualified as a candidate.

His most controversial proposal is that of “cutting off” the hands of corrupt public servants. He expressed this idea in the first debate between the candidates at the end of April 2018, and he did not hesitate to clarify that he meant it literally.

Margarita Ester Zavala Gómez del Campo, who was previously a member of the PAN, was also running as an independent candidate. She is the wife of former president Felipe Calderón and had served as a legislator. However, on May 15, the former First Lady announced that she would withdraw from the contest.

Our introduction to the candidates to succeed Enrique Peña as Mexico’s president ends here. In our next article, we will take a look at opinion polls and the broader state of the country that these aspiring presidents want to govern.