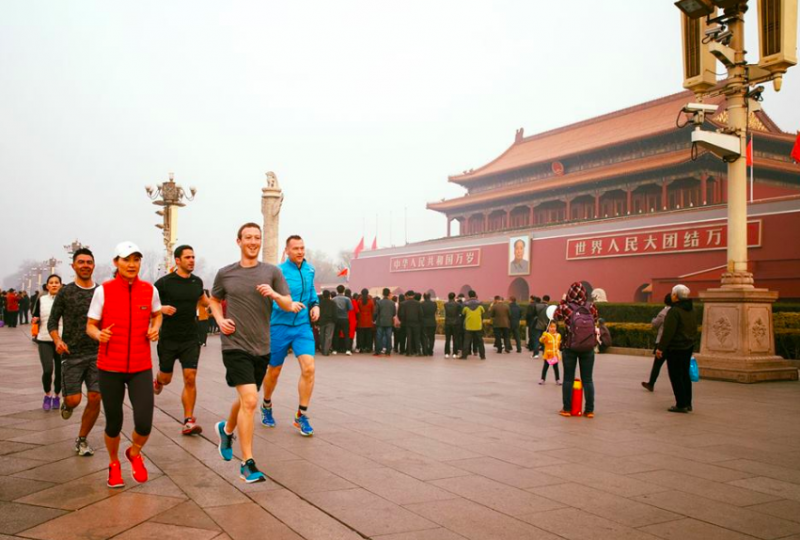 While in Beijing, Zuckerberg went for a jog. As if he were a regular tourist, posting updates to his buddies back in Silicon Valley, he wrote on his Facebook page:

It's great to be back in Beijing! I kicked off my visit with a run through Tiananmen Square, past the Forbidden City and over to the Temple of Heaven.

This was remarkable on several levels. Facebook has been almost continuously inaccessible in China since 2009, as some of Zuckerberg's followers were quick to point out — practically speaking, how did he post that update? Others remarked on the conspicuous cloud of smog hanging in the background.

But several netizens seized on other particulars of this seemingly harmless act. Tiananmen Square, they noted, is no ordinary public plaza. In the comment field beside the post, an argument broke out between users — much of it written in Chinese — about exactly what happened on June 4, 1989, in Tiananmen Square.

One user wrote that on that date, 29 years ago this week, 6,400 peacefully demonstrating students were shot and killed by police. Another retorted that only students who attacked police were shot at. Users offered vastly different estimates of how many students died that day.

Multiple users remarked on pollution and human rights after Mark Zuckerberg posted about his jog through Tiananmen Square in March 2016. Photo via Facebook.

It is not surprising that Zuckerberg's followers had such wide-ranging ideas of what truly happened. After all, this history has been systematically disappeared from the public record in China, both online and off.

The 1989 student protests and ensuing massacre at Tiananmen Square represent the most sensitive and heavily censored topic on the Chinese internet — conversations like the one on Facebook can scarcely take place on Chinese social media platforms like WeChat and Weibo, if at all.

The Chinese government prohibits all forms of offline and online discussion on the Tiananmen protests. It requires internet companies and platforms to censor websites, stories and academic texts related to the protests, along with all online posts that mention “Tiananmen Square”, “June 4″, and “Hu Yaobang” (the politician whose death sparked the protests). Even images of candlelight, symbolizing a vigil, have been banned in the past.

Facebook is no stranger to this regime. Despite having been blocked in mainland China since 2009, the 2.2 billion user social media network is accessible and popular in Taiwan and in Hong Kong, which is a special administrative region of China that has a semi-autonomous system of governance, but ultimately lies under the thumb of Beijing.

In 2017, approaching the 28th anniversary of the Tiananmen Square massacre, a user in Hong Kong created a profile picture frame commemorating the victims. Facebook’s picture frame function allows users to change their profile photos in support of a cause. The frame in question, pictured below, carries messages calling for justice for Tiananmen protesters and an end to “dictatorial rule” in China.

This was a surprising response for a social media platform once lauded for its catalytic effect on social movements against authoritarian governments in countries ranging from Egypt to Ukraine to Venezuela.

Facebook users in Hong Kong protested the removal of the frame and voiced concern that the site was curbing their freedom of expression, in what they suspected was an effort to appease the central Chinese government and perhaps increase Facebook's chances of re-entry into the lucrative Chinese market.

After the incident was reported in the news, the social media giant publicly apologized and approved the frame. In a brief statement, Facebook called the rejection a “mistake”.

But did the company really remove the frame in error? It is impossible to know. Was this the decision of a machine? Of a human moderator who thought the word “vindicate” was reason enough to reject the frame?

Or was it — as Hong Kongers suspected — a more calculated move, intended to kowtow to Beijing?

Just last week, another message promoting solidarity with the Tiananmen protesters was censored on Facebook. The message invited supporters to join an event in Hong Kong called “The Voice of Dissent”, on the eve of the 29th anniversary of the massacre. Automated messages from Facebook identified the message as spam. This may have been a technical designation, due to a generic email address that appeared in the message, but it still raised suspicion among Hong Kongers that something was amiss. 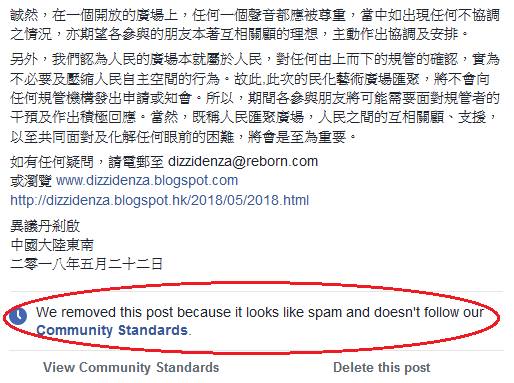 Screen shot of Voice of Dissent message, with Facebook response.

In its current form, Facebook does not offer users a way to ask questions about the company's actions and be guaranteed a concrete answer specific to their case. When a piece of content is removed from the platform, there is not a meaningful process of appeal whereby users can expect an explanation of why this piece of content, specifically, was removed.

Instead, they are left to wonder if the reasons are purely technical, or not. In this case, many wondered if there was a bigger political agenda at stake.

Between the Cambridge Analytica revelations, congressional hearings in the US and the EU's freshly-implemented General Data Protection Regulation, there is a strong chance that Facebook's ability to monetize user data will soon face new limitations. This means that Facebook will need to find new ways to make money and grow its business. Entering the Chinese market — if the Chinese government will give its blessing — would be a surefire way to secure the company's future.

And when we think back on Mark Zuckerberg happily jogging in the same public space where thousands of students were killed by the same government that Zuckerberg now seeks to appease, it is difficult to imagine that this, like the rejection of the commemorative frame, is just a mistake.

For some years now, Zuckerberg has been too powerful and had too many resources at his disposal not to know how his actions are interpreted by the global public. He cannot claim ignorance at this point in the game, nor can he afford to.

The floor you stepped on has been covered by blood from students who fought for democracy. But, enjoy your running in China, Mark.