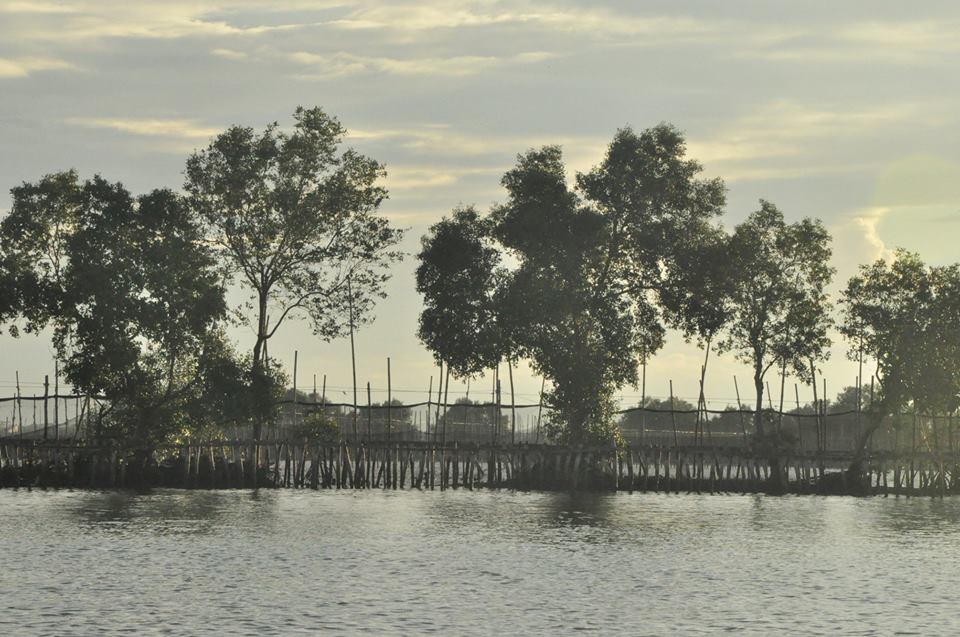 Taliptip community in the Philippines. Photo from Kalikasan PNE, used with permission

This article by Leon Dulce is from Kodao, an independent news site in the Philippines, and is republished on Global Voices as part of a content-sharing agreement.

Obando Fishport, located north of the capital city of Manila in the Philippines, bustles with activity at 6:00 a.m. A colorful and tightly packed flotilla has gathered, fishing boats slipping and sliding carefully past each other to take turns docking.

The bustle slowly fades to an idyllic backwater when traveling via pump boat to the coastal village of Taliptip in Bulakan town, Bulacan province. Its surrounding seas are home to some 5,000 fishers and salt-makers who get their bounty of fish, mussels, crabs, shrimp, and krill from these gentle waters and mangrove corridors.

On this collection of small island communities, a 2,500-hectare reclamation project by the San Miguel Corporation is being aggressively pursued, threatening to convert everything in its wake into a so-called ‘aerotropolis complex’ of airports, expressways, and urban expanse.

The project was a well-kept secret from Taliptip’s residents until concerned environmental advocates and church workers raised the issue among the communities, and until President Rodrigo Duterte was seen in the news already inking the project’s deal.

Residents, especially the families who have lived in the village over the past 80 years, are concerned that their life and livelihood are under threat by this project. 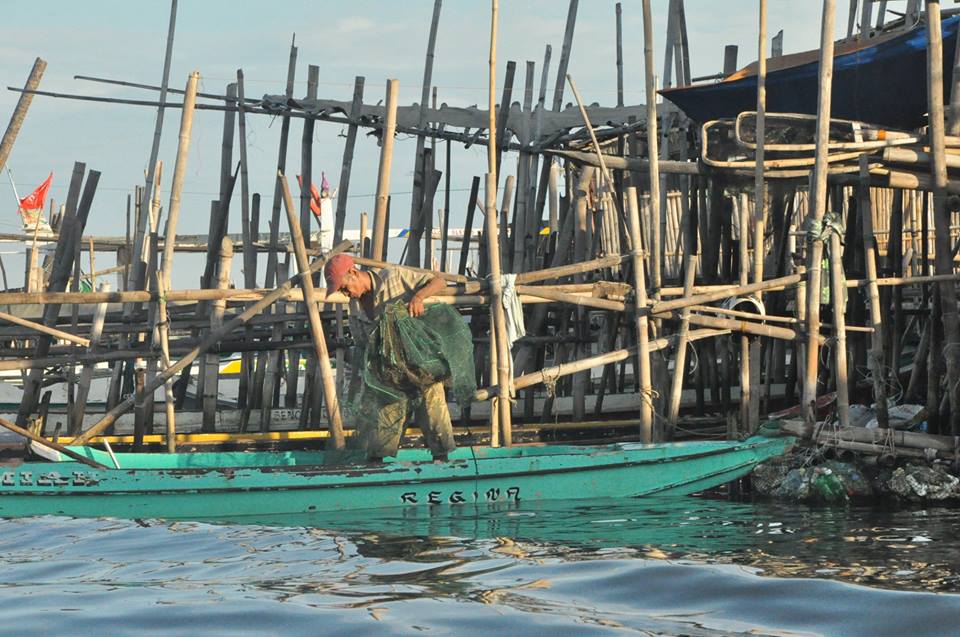 A fisherman tending to his nets in Taliptip. Photo and caption by Leon Dulce/Kalikasan PNE, used with permission

“So long as the sea is here, there is hope…What will we fish when all this is turned into cement?” said Arthur*, a fisherman from Sitio Kinse, an island community of Taliptip ensconced in a dense shroud of mangroves.

Arthur says the average fish catch for a day nets around 500 Philippine Peso-PHP ($10.00 US Dollars-USD). Deductions from their gross income will be used to defray gasoline and other expenses and pay their boat consigner’s share. During the dry seasons, some fishers tend to the salt fields and get 154 to 254 PHP [$3-5.00 USD) as payment per sack depending on the quality of the salt.

A good day’s catch is a rarity nowadays, however. Gloria*, a resident of Sitio Dapdap in Taliptip, explained that fishing families usually stock up their live catch in makeshift pens and sell these on a weekly basis. A daily trip to and from the central market in Obando is simply too expensive compared to the dwindling daily catch. 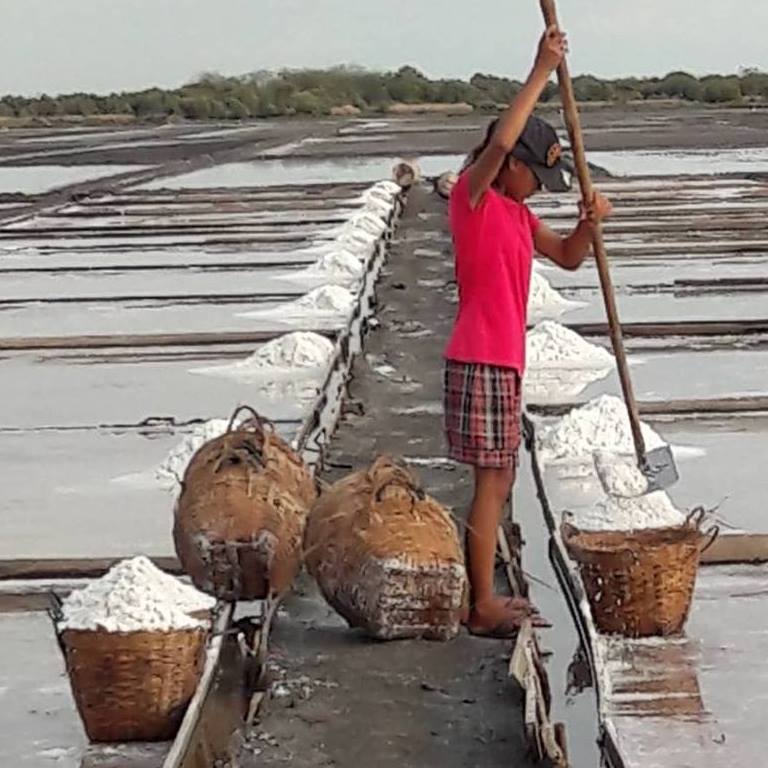 The proposed reclamation threatens to destroy this village of fishers and salt-makers. Photo by Kalikasan PNE, used with permission

The hardships push the people of Taliptip to live sustainably by necessity. Living off the grid, residents have pooled their resources to set up solar panels and batteries for simple electricity needs. The residents take care of the mangroves since the shellfish they harvest live among its roots and serve as a natural barrier to big waves. 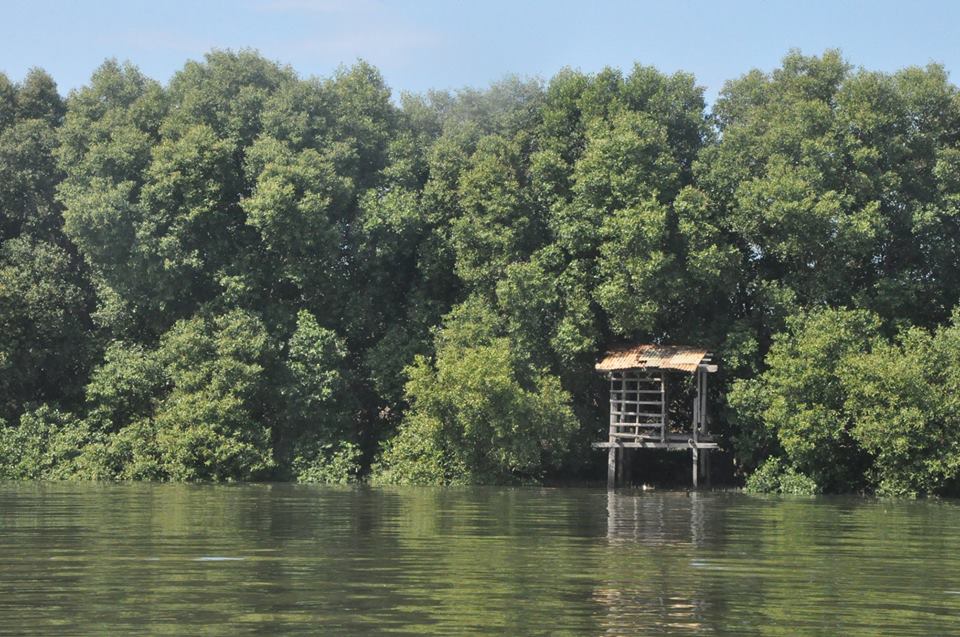 A section of the Bulakan Mangrove Eco-Park. Photo and caption by Leon Dulce/Kalikasan PNE, used with permission

Aside from a 25-hectare eco-park established by the Department of Environment and Natural Resources (DENR), various other stretches of mangroves are spread across Taliptip’s waters. A huge population of birds such as terns, egrets, kingfishers, and swallows makes a home out of these trees.

These coastal greenbelts hold immense value as a balanced ecosystem. However, the National Economic Development Authority (NEDA), the lead agency that approved the reclamation project, however, opposes this view.

San Miguel has pronounced that it can payroll entirely for the 735.6-billion PHP (14 billion USD] ‘aerotropolis,’ a hefty price tag and a huge financial boost for NEDA, enough to justify the displacement of thousands of people when the ecologically critical vegetation gets converted.

In early 2018, the Duterte government also signed a Memorandum of Understanding with the Dutch government to cooperate in the crafting of the Manila Bay Sustainable Development Master Plan (MBSDMP). The cart came before the horse, however, with projects such as the aerotropolis rapidly progressing without the guidance of a comprehensive sustainable development and management framework.

Almost 30,000 hectares of such projects presently cover the entire length of the bay. 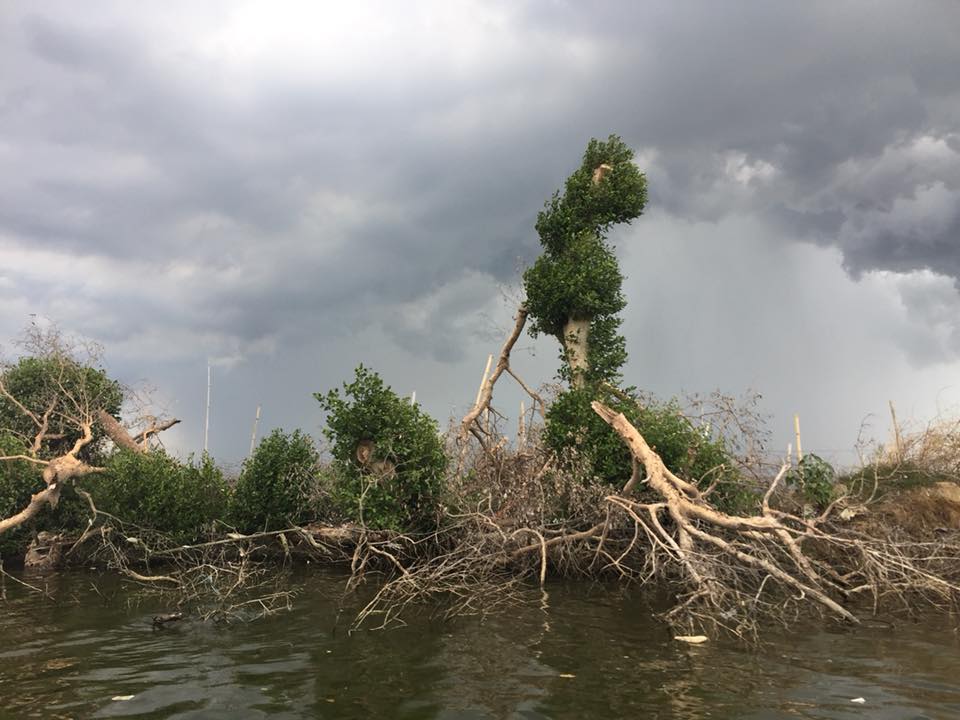 A portion of a stretch of mangroves allegedly cut by San Miguel personnel. Photo and caption by Leon Dulce/Kalikasan PNE, used with permission

San Miguel personnel were reportedly behind a massive mangrove-cutting spree in Taliptip in May 2017. Communities had no idea if those responsible held a special tree cutting permit from the DENR, as required by law.

For Arthur, defending the only livelihood he knows from the real threat of reclamation is non-negotiable. He explains, “we will not leave our homes. We will fight so long as there are people supporting us and giving us the strength to fight.”

Environmental groups and churches are digging in deep with communities in the struggle to save Taliptip and various other communities across Manila Bay. Will Duterte stand with the people and stick to his rhetoric against reclamation, or will he bow once again to the dictates of big business interests?

Leon Dulce is the national coordinator of the Kalikasan People’s Network for the Environment. Follow the local people’s struggle to save Taliptip on Facebook, or through the hashtag #SaveTaliptip on Twitter.