"No one is ever fully prepared to leave." 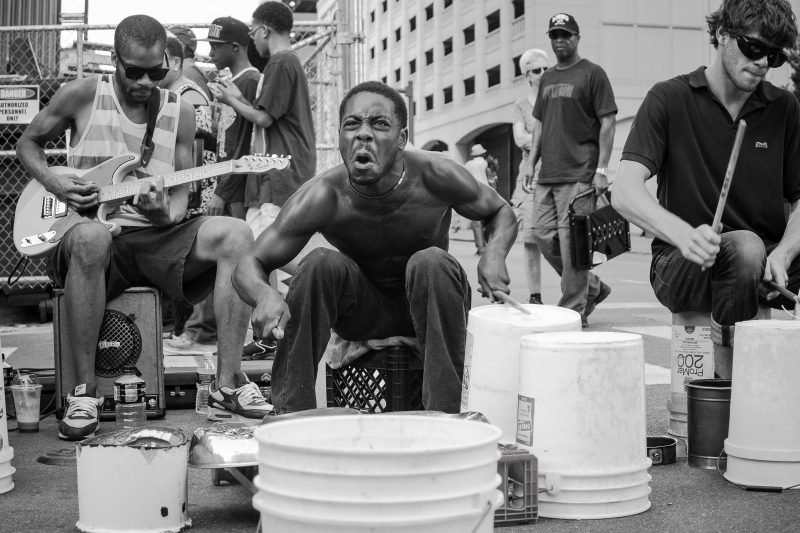 Percussionist on the streets of Detroit, Michigan, United States of America. (Photograph by the author, published with permission).

Talking about what it means to migrate can be difficult, but perhaps time or distance enables some to see the migration process more clearly as a whole comprised of a myriad of parts. Every migration story is unique, but these stories are also connected to things that transcend them and make them equal to other life stories. Could this advice be of any use to people who find themselves in the process of leaving their homes, or who have already left? For these people there are no words strong enough to be of any comfort or counsel. No one is ever fully prepared to leave.

In the Venezuela that I left, I was part of a story shared by a whole group of people who required no explanation from me. Everything was easy to read: the gestures, the routines, the dangers, the past and the prospects of a future—even if it was clouded by the fog of political instability. Because personal and group identity were implicit in all our everyday activities, the questions of who am I or who are they did not exist for me. At that time the rate of emigration from Venezuela had not yet reached the shocking figures that we are seeing today, and leaving still had romantic overtones: going away meant automatically doing well in that new land.

The Venezuela that started to build itself in exile back in 1999 was very much misunderstood by the Venezuela that was left behind. Grievances on the part of the emigrants in the face of their new living situation were not accepted by their fellow compatriots who, at the same time, were beginning to suffer what is recognized today as the worst political, economic and humanitarian crisis in the contemporary history of Venezuela. Because of this, emigrants were losing a say in matters: their political opinions of their country were minimized due to the distance and because the difficulties that stemmed from their change of life were not accepted as such. The belief that a new country offered a life devoid of real difficulties, at least in comparison with the difficulties faced by those back in Venezuela, filled the imaginations of those watching them from home. And at the same time, the country receiving these immigrants did not consider the newcomers’ criticism valid, far less accept them as true political actors.

The others, foreign realities and impenetrable worlds

I did not know any of the things I'm reflecting upon now when I first arrived in the United States in the summer of 2011. At that time there was very little that I could say apart from some greetings and the necessary apology for not speaking English. (The option of calling friends who were still in Venezuela to get things off my chest was not an option). In order to establish any new communication, I needed my husband's help to write, read and translate what I was saying to to other people and then, in turn, translate what they were saying to me. 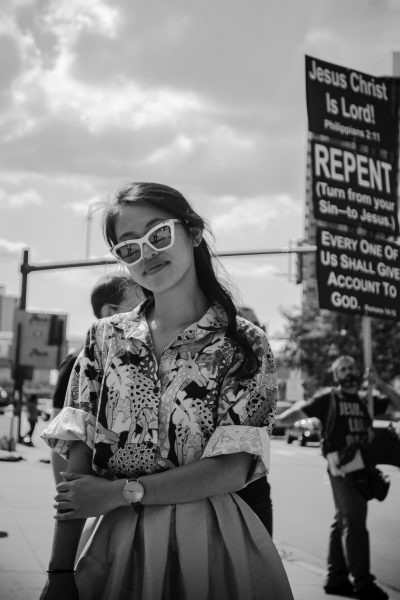 Photograph taken during the Detroit Jazz Festival. Behind this young woman, who looks directly at the camera without a trace of shyness, there is a religious protester speaking of forgiveness and repentance. This is a stark contrast with the young woman who stopped in front of my camera and posed without me even having to ask her to do so. (Photograph by the author, shared with permission).

In short, at the age of 26 I had become an illiterate woman who depended entirely on her husband to communicate. This fear resulted in self-confinement at home, coupled with endless hours of total isolation. When someone leaves his or her home country, even the most insignificant incident that occurs in contact with this other outside world can have an immense demoralizing power that can plunge anyone into the deepest of insecurities.

Hiding away is, therefore, one of the possible paths one can take, and this was precisely the one that I chose for quite some time.

During this time of confinement, the windows of my home became my favorite camera. These wide openings in the walls gave me the chance to get closer to the social dynamics that I considered impenetrable. Part of the fascination with observing others lies in the questions that arise from this encounter with a foreign reality. Likewise, the nature of the answers that emerge from such questions has the power to raise more unanswered questions.

By observing, wondering and reacting, I learned that the people I was observing were all very different from one another. While this world rich in differences was flourishing and expanding, my personal identity was diminishing. I was no longer seen as me, a person from the city of Barquisimeto, but instead as a person from Venezuela. I even fell into a category that was as new as it was incomprehensible: I was a latina, the label that is supposed to define someone from Tierra del Fuego as being no different from someone from the city of Juárez in Mexico.

But I did gain something from all it: I realized that, almost without fail, neither the Venezuelans from here or from there, nor the Americans from anywhere in the country, reject the stories or products that come from encountering a photo or a photographer. This was something I learned when I decided to stop watching through my window and went out for the first time with my camera for company.

And now the camera comes with me every time.

Snippets of the world

There is something transgressive in the simple act of taking a photograph. The image captured is the small trophy of a shrewd petty thief who becomes the owner of a snippet of the world that has been frozen. The space of the streets contracts and all gestures become important, but for the purpose of recognizing the ones that would make me want to hide, but instead to try and gather them, to collect and understand them all in the still of the night, when reviewing the remaining photographs from the day.

I, who had remained cooped up for a number of years, all of a sudden found the courage to go out and face people with my camera. When I was able to start reading, the short texts that appeared along the way were included in the scenes of some of the people on the street, something that served as a base and support to enhance these images. 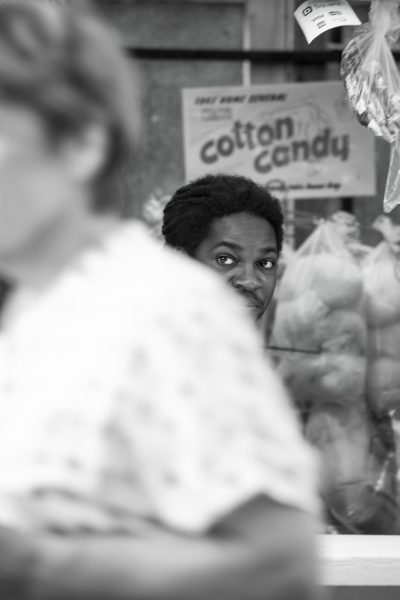 Ann Arbor, Michigan. (Photograph by the author, shared with permission).

Even when my ability to communicate was still very limited, people would come and ask me to take their photographs. Having this kind of control in a situation like this, in which an individual belonging to this indifferent world, someone that in another time would have passed before my window without seeing me, is looking me directly in the eye, was a new way of experiencing being an immigrant. It was also a small victory in the face of the insecurities with which all immigrants have to live.

As a Venezuelan, and through my camera, I have built an image of the United States for myself—and for my own survival as well. Sharing my images made it possible for me to get back to communicating by using a language that depended more on gestures than it did on voice.

By using a camera I learned how to read this, my new world. I learned to speak, only not English or Spanish, but Photography. And most importantly, I learned how to be looked in the eye once again. Photography was the bridge by which I discovered that I am the “other” in this country, but also that difference is good; so much so that there is nothing that can't be photographed, nothing that does not warrant the telling of a new story.