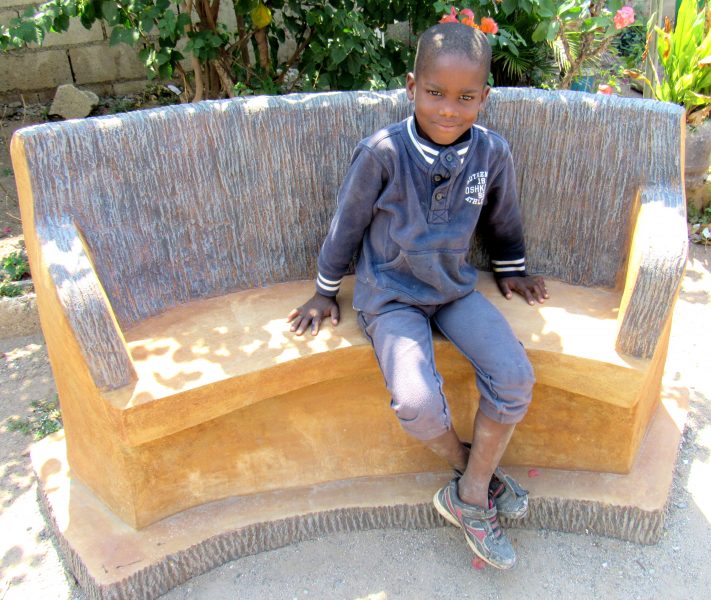 The theme for the 2018 World Environment Day (June 5) is #BeatPlasticPollution and discussions have stepped up in Jamaica over waste management — especially how best to tackle its tide of plastic.

Senator Matthew Samuda, who filed a parliamentary motion in 2017 for a ban on plastic bags and styrofoam, promised action in February 2018, but no anti-plastic measures have come to pass. Samuda tweeted recently from a Kingston Harbour beach:

Imagine we cleaned this beach on April 21st, all it took was one rain and look at it, WORSE than before. We are flirting with Disaster. There can be NO Blue economy if we continue to manage our Solid Waste this way. Urgent Action must be taken now. pic.twitter.com/9P6c3mBEza

Regardless of the outcome of government deliberations, the private sector including groups like Recycling Partners of Jamaica been moving ahead with cleanups and recycling efforts. 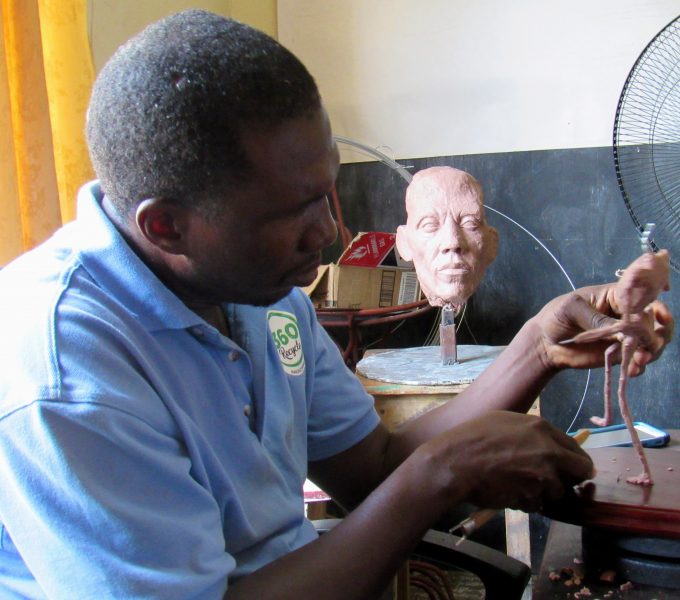 Founder and CEO of 360 Recycle, Scheed Cole, working on a model. Photo by Emma Lewis, used with permission.

In particular, one young social entrepreneur has come up with a creative way of repurposing and reusing plastics. Scheed Cole and the company he founded, 360 Recycle, employs approximately 20 young people from the surrounding community, and together they build innovative playgrounds, sculptures, water features, plant pots, construction materials and more, all from plastic bottles and styrofoam. The company is also building a diorama for the Natural History Museum of Jamaica's new exhibition hall.

Global Voices recently visited 360 Recycle‘s workshop in inner-city Kingston and spoke to Cole. He was busy sculpting a small model while his wife Keisha (also the company's administrator) kept an eye on the work in the yard outside, as well as on their children, who were on a school break. As the sound of hammering and tapping floated through the window, Cole talked about his vision.

Global Voices (GV): What motivates you?

Scheed Cole (SC): I am very drawn to people in need, and how I can play a part to help them. That's where the empathy comes from. That is one of the main reasons I made 360 Recycle into a social enterprise. I am a lover of science, and I am a lover of materials, as a sculptor. A lot of the material I used was recycled. I turned to plastics while looking for lighter materials. It became then intentional to tackle the environmental issues. I started to use more recyclables and that is how 360 Recycle came to life. It became the core of the business. 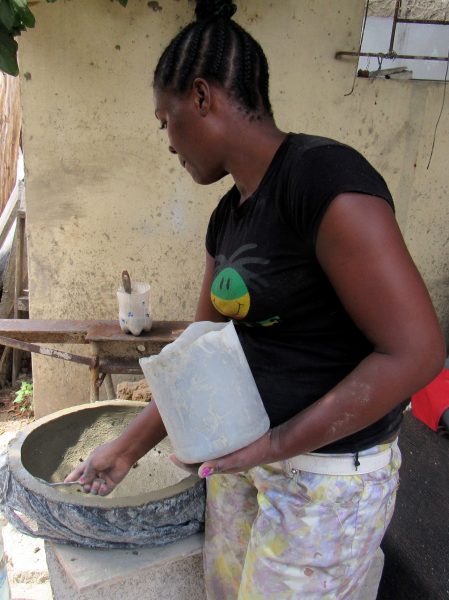 A worker from the Rousseau Road/Lyndhurst community making a bowl. Photo by Emma Lewis, used with permission.

GV: Do you see yourself as a creative or as a manufacturer?

SC: We are both [Cole and his wife] trained teachers. I spent some years teaching visual arts in inner city schools. I wanted to be a scientist, but there's a lot of science in art. I do mostly applied arts — the use of industrial sciences merged with fine arts. 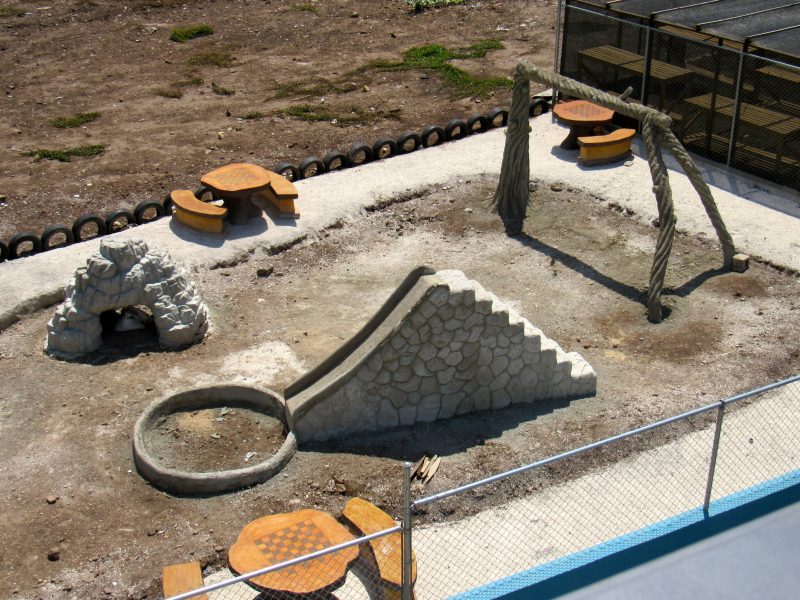 A playground that was under construction in Rose Town, Kingston, a few years ago, using 360 Recycle products. Photo by Emma Lewis, used with permission.

GV: Creatively, then, what inspired you?

SC: From the moment I became self-aware — age four — I was aware of myself drawing. I took waste and found objects such as copper wires, plastic bottles, corks…making robots and laser guns and cars, even attaching electronic parts to them, while I was still in primary school. I wasn't focused on school. I had attention deficit disorder and I was dyslexic. My stepmother was a secretary, and loved word games — like that wicked game, Scrabble! But it was, ‘Scheed will have to learn a trade; he isn't good at academics.’ I went on to St. Andrew Technical High School. It was upstream from that point. I think schools teach the kids academics too early — they don't become creative, but geared to pass exams. I realised that something that was a hobby became something that could support me financially. My art teacher, Marlon Jones, was very instrumental. He entered me in competitions. I won prizes in a United Nations anti-pollution global competition in 1992. I went to the Jamaica Pegasus Hotel for the awards ceremony. I got to dress up in a blazer. I was celebrated at the school. I walked with my head held high.

I left high school with seven subjects, studying on a hungry belly. I did some construction work to pay my school fees. I worked for six months as an unpaid intern at a graphics agency, then I went to teachers’ college. 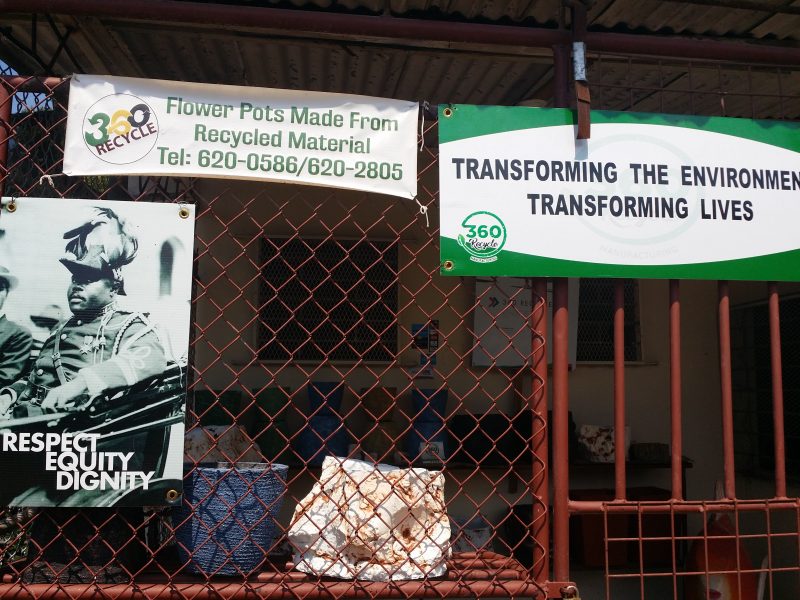 A sign at the 360 Recycle workshop that reads, “Transforming the environment, transforming lives”. Photo by Emma Lewis, used with permission.

GV: What to you is the importance of recycling and environmental conservation?

SC: It's about being aware and ‘awake’ — becoming sensitive to environmental impacts. The thing is, we are detached from nature; we are no longer a part of the ecosystem. It's a national problem. We need to bring people back to a love and respect for nature. Respecting the trees, respecting the rivers, respecting the seas. We have detached from it because we have placed more emphasis on academics. We have short-changed ourselves.

It is the sensitivity of humanity that we have lost. We have put the arts on the periphery. But these are the things that make us feel. What happens if we lose the trees, the birds, the insects? They are nationals of Jamaica as well — the butterflies, the crocodiles, are Jamaican nationals. One thing with nature is it kicks back all the time. Human beings are the ones who cannot recover quickly.

360 Recycle is saying, ‘Put the environment first. Put aside greed.’ We [Jamaicans] are trying to compete, not realising what our true resources are. Those resources are ‘wood and water’ — the foundation — but still, we are chasing after the dream of First World countries. We have become so blind and so desensitised. 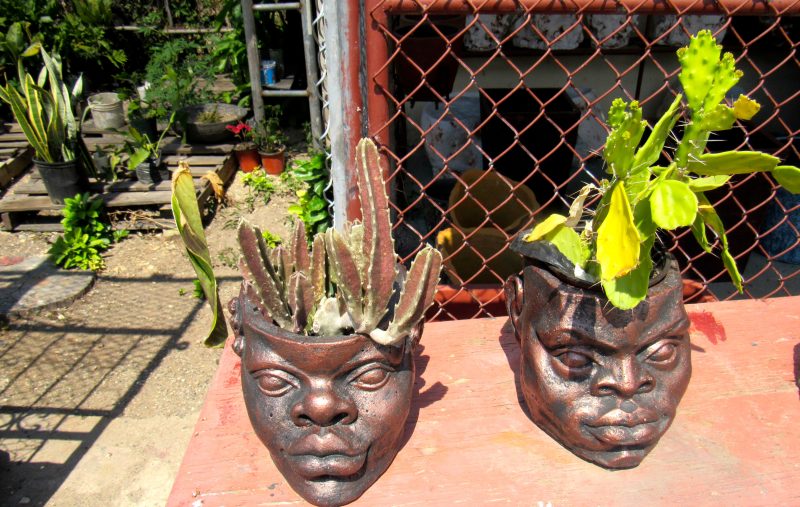 Flower pots made by 360 Recycle from plastic bottles. Photo by Emma lewis, used with permission.

GV: What is your view on Jamaica's waste management problem?

SC: There is no waste. Waste is created by lazy people. People think the only way to deal with styrofoam and plastic is to ban it. There is no mental discipline to find a use for a raw material that was really created by the earth, not man [fossil fuel]. So how can we reduce its use, keep it ‘in the loop’, create a zero-waste environment? We can find a purpose in everything. But modern society is fast. The quickest thing to do, rather than put it back in the cycle, is to use it once and take it straight to the dump.

The landfill may never have to exist. Nature reuses everything; it is a constant cycle. Transporting your waste to another country is not natural either. For 360 Recycle, we ask why can't we reuse our waste here? We are proof of this. We can reutilise all the waste in Jamaica. We just need to build our capacity.

Banning plastic is not going to help deal with the ‘nastiness’ of our people; their attitude. They are going to throw away something else. It's so short-sighted. We need to resolve the overall relationship of our people to our environment — and not just one element. People will still be throwing garbage out of their cars onto the street. People will still be dumping things into the rivers. If we really mean business, we have to come up with a solution to the whole problem, not just one aspect.

Why don't we spend our money on more units to collect recyclables and establish a sorting system, and incentivise people to do so? 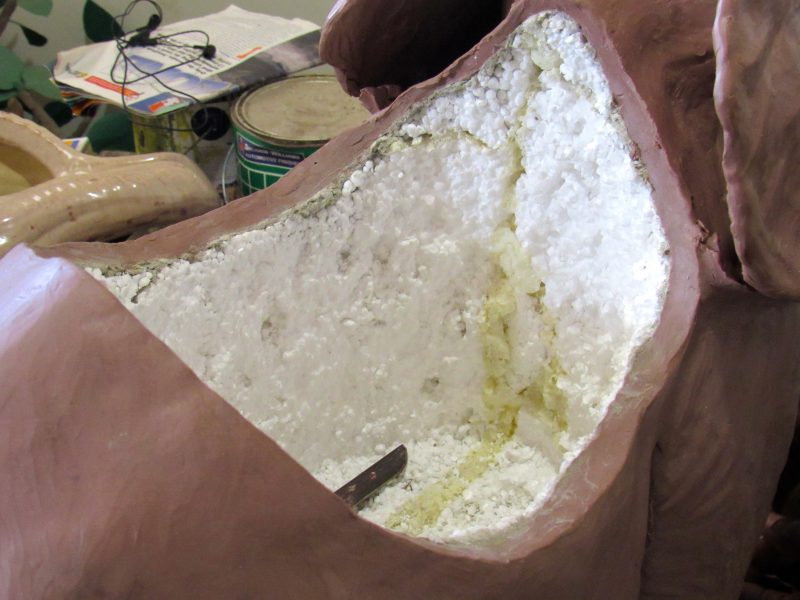 A close-up of the inside of an elephant sculpture, made by 360 Recycle out of styrofoam. Photo by Emma Lewis, used with permission.

SC: The thing is, 360 Recycle is not a government initiative, although it is seen as a solution to a national problem if it were scaled up to a national level — but the government is not taking it up. We have collaborated with others in the past. If we could only look at it as not ‘my thing’, but as something that works — and put all our efforts behind it. If it is a good idea, let's rally behind it together. Unity is strength. 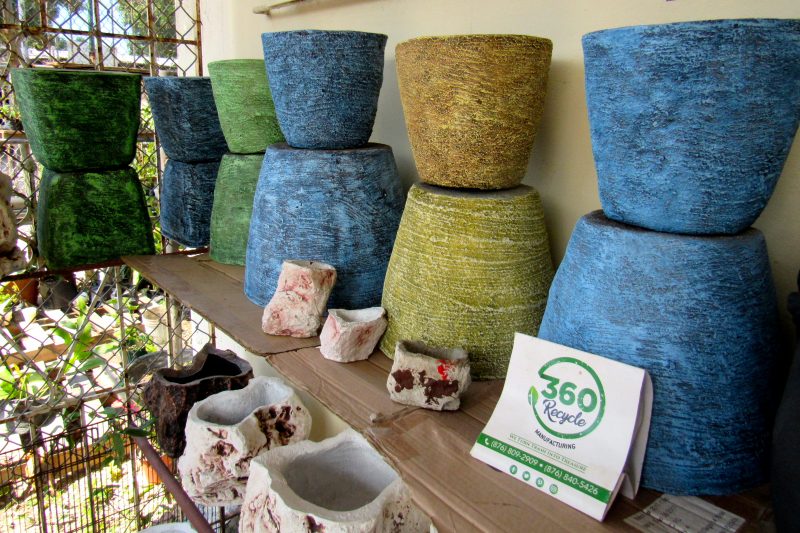 SC: I see us making Jamaica a zero-waste country — at least between 80% and 100% zero waste — with every raw material, whether organic or man-made, repurposed and brought back into the cycle. We see 360 Recycle developing products that will be utilised globally. Like Sweden, we would run out of waste here in Jamaica. Sweden was a government initiative, but we can make this a private sector effort and move past the naysayers.

We are David. We have a pebble of an idea, and it is making a big impact. The Goliath is the improper waste disposal; the lack of waste management systems that are not working; the lack of awareness among our people; the lack of initiative. We are taking on that giant head-on, and we are not backing down.

This is bigger than me. It's for my generation; generations to come. As long as the earth exists.