With elections fast approaching in Mexico, what is at stake for citizens? 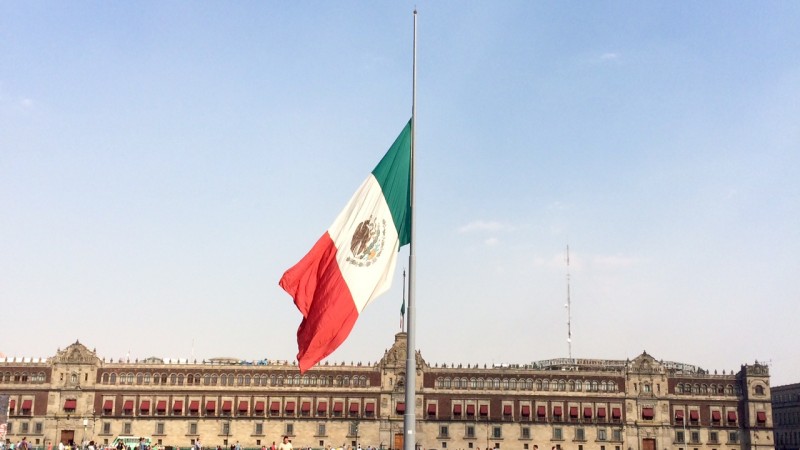 Mexico’s national flag at half-mast in a sign of mourning. Main square of Mexico City. Photo by the author, used with permission.

This is the first in a four-part series on Mexico and upcoming elections.

On 1 July 2018, Mexicans will go to the polls in what is seen as the biggest election in the country’s history. However, both national and international attention is focused on the presidency.

The graphic below shows the number of posts up for election – over 3,220. Of these, 629 are at the federal level, including 500 federal deputies (in yellow), 128 senators (dark blue), and the presidency. 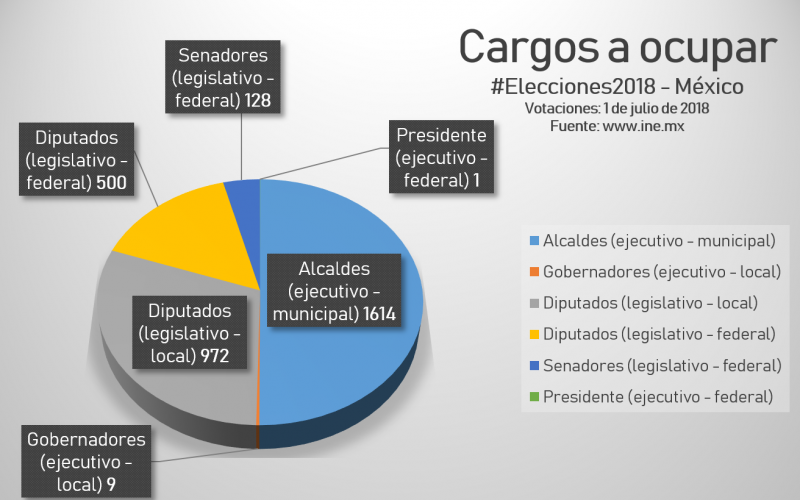 A ‘perfect dictatorship’, a change of power, and an armed conflict

For over 70 years of the last century, presidents from the Partido Revolucionario Institucional (PRI) have ruled Mexico in what Peruvian writer and intellectual Mario Vargas Llosa once termed a “perfect dictatorship”. In the 2000s, Mexicans left the one-party rule behind and opened the way for Vicente Fox, a candidate from the Partido Acción Nacional (PAN). Six years later, Felipe Calderón was elected, also under the PAN party.

Calderón’s term is widely remembered for his declaration of war on organized crime which marked the beginning of a conflict between armed groups, police, and the Mexican armed forces. One of the many authors who has discussed this topic is Jacobo Dayán. In a 2017 piece for the outlet Aristegui Noticias, Dayán wrote:

Since the start of the large-scale military presence to combat organized crime, the then-president Felipe Calderón called it a war. In effect, it seems he was correct, this is not a fight against crime but an internal armed conflict.

A presidency characterized by corruption and human rights abuses

In 2012, the PRI retook control of the government with Enrique Peña Nieto as president. Peña Nieto decided to continue the war launched by his predecessor. His term has been heavily marked by the violent consequences of the armed conflict. Among these was the forced disappearance and subsequent execution of 43 teaching students in Ayotzinapa – a case for which no one has yet been sentenced.

Speaking to independent outlet SinEmbargo about the Ayotzinapa case, the executive director of Amnesty International in Mexico said:

After three years, we are still searching for our disappeared ones among the wreckage of corrupt institutions and the crime of forgetting, where the real political will of the authorities has never been present (…) the historic lie of this case will mark the term of Peña Nieto (2012-2018), but in solidarity with [the students’] parents we will continue speaking about them, we will continue searching for them, fighting to bring the truth to light and for access to justice.

Enrique Peña Nieto and his cabinet have been accused by the public and civil society organizations of various cases of corruption, the majority of which have gone unpunished. This includes the Odebrecht scandal, which saw politicians across Latin America having to account for their involvement and, in some cases, face criminal prosecution. However, in Mexico, the episode has been marked by a lack of legal consequences and opaque investigations.

Peña Nieto's term also has been marked by a series of controversial constitutional reforms, particularly in education, energy, and transparency in accessing public information.

For the first time, Mexicans have several presidential options

Alongside the traditional parties’ candidates, citizens will now be able to vote for “independent” candidates who were not formally backed by any national political party.

The candidates are attempting to win support in a country where 200,000 people have lost their lives to violence in the past twelve years, with a precarious level of press freedom, an unknown number of forced disappearances, and hundreds of thousands of displaced people. It is a race to gain the confidence of people suffering from the existing armed conflict and frustrated by the corruption and impunity in circles of power.

At the same time, Mexico’s elections resonate at a regional level, from north to south. They are part of a series of elections across the region marked by significant political changes and big swings from left to right, from traditional parties to new political groups, or of the continuation of established orders and policies with very low popular legitimacy.

In the next part of the series, we will discuss each one of the candidates: Ricardo Anaya, José A. Meade, Andrés M. López, Jaime Rodríguez “El Bronco” and Margarita Zavala, who is also the wife of former president Calderón.

We will also look at the polls seeking to measure the electorate’s opinion, but we will not stop there. Stay tuned.