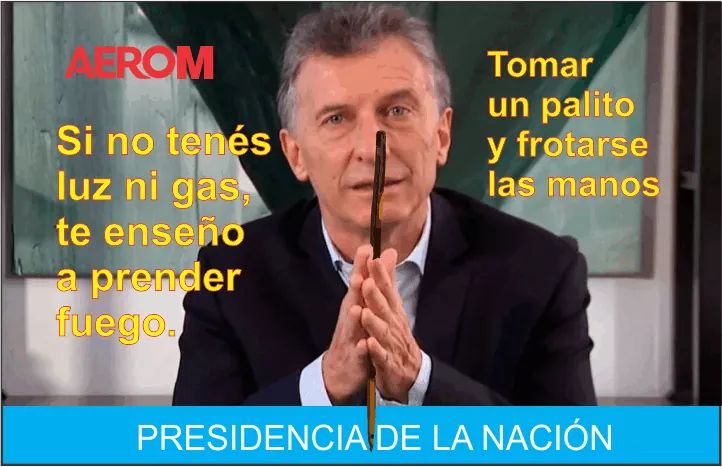 “If you don't have gas or electricity, I can teach you how to make a fire. You just take a stick and rub your hands together. -President of the Nation” Meme widely shared on Twitter under the hashtag #MacriTips by user @MarceRoulier

Since May 27, Argentinian Twitter users have flooded the web with jokes and memes in response to President Mauricio Macri’s recent suggestions on how Argentinians struggling with an increase in electricity and gas bills can make ends meet.

Macri's “advice” came during a speech to the nation in which he justified his decision to maintain the hiked prices for the capital and surrounding areas — the most densely populated regions of Argentina — where people could see bills increase 58% for gas and 67% for electricity.

He said Argentinians could use LED light bulbs, limit their use of gas-powered stove tops, and even take shorter showers to save money. These suggestions will go beyond his speech and will be included in an awareness campaign, according to the president.

“If everyone gathers the leftover bits of soap and pastes them together, you can save up to a  soap per month” #MacriTips

You could use both sides of the toilet paper #MacriTips

You and three neighbors can buy a bone to make broth and then take turns using it. #MacriTips

Image: If you turn your underwear inside out you can wear it for one extra week. Please save!

If you pass by a McDonald’s, go to the bathroom and take some napkins home with you. You can save on having to flush at home and having to buy Carilinas [a popular brand of bathroom tissue].

#MacriTips if you wash salad veggies while you shower you not only save time, but also water.

With a charmander you can save up to 37% in gas! #MacriTips

The end of an era

It is important to note that for nearly 20 years Argentinians have been paying prices for basic goods and services that are much lower than their actual value, thanks to a system of subsidies.

In January 2016, shortly after taking over the presidency, Macri made official the first increase in electricity bills after suspending the subsidies, but maintained certain services for free for families in need. Other increases came in public transport and natural gas, and electricity and gas bills were hiked yet again in December 2017.

As a response, in March 2018, the representatives of the opposition parties presented a bill to bring down the prices of electricity, water and natural gas to where they were in November 2017. The draft law also proposes a ban on any new price increases for a year and any interruption of services for lack of payment.

President Macri said the bill would be “hurtful” and that it would “make us believe that there’s a magic solution, that we can just bring all rates back down.”

In the end, the bill was approved by the Senate, but vetoed by the president.

Meanwhile, Argentinians continue to make jokes and share memes, a distraction from the inevitable anxiety for the future state of their household budget.

If you swap regular books for braille you won't need light to read in the dark.