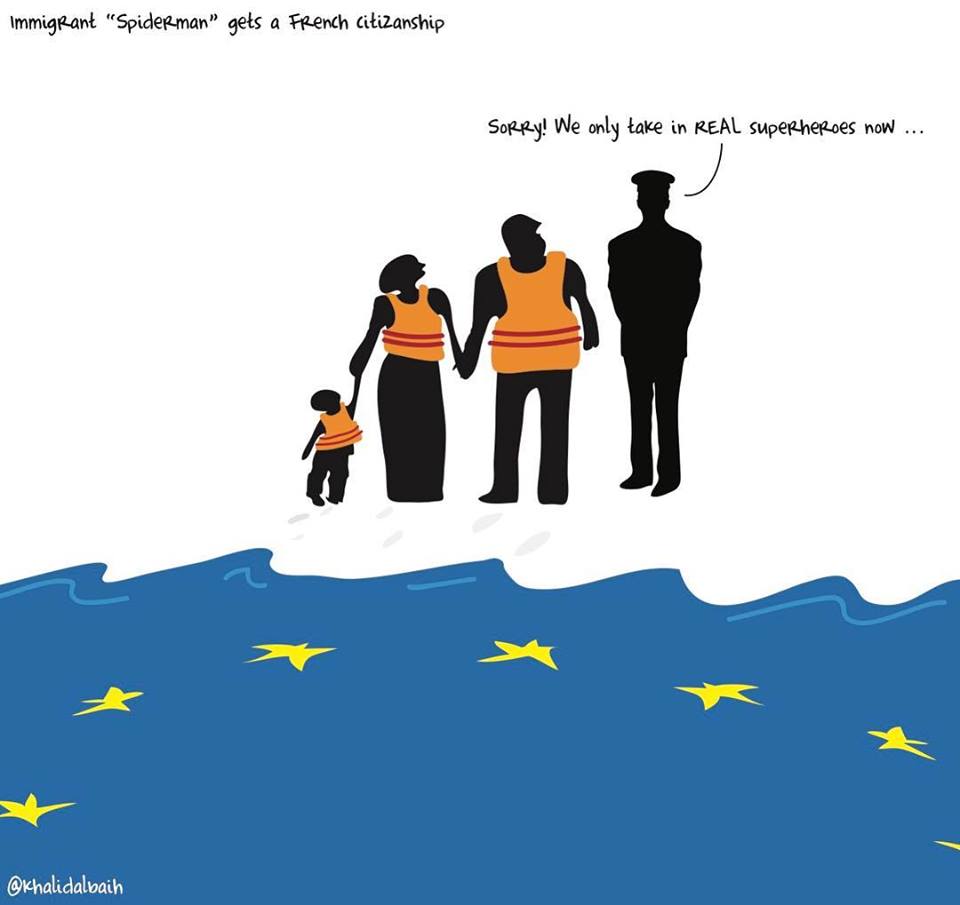 Illustration by the author. Used with permission.

As a kid reading Arabic-language versions of DC and Marvel comics in Sudan, I believed in superheroes. But I didn’t understand why none of the superheroes looked like me or had stories to which people like me could relate. Maybe that’s why I decided to become a cartoonist?

All my childhood feelings came to the surface yesterday on Twitter when I stumbled on the viral video of a man selflessly scaling a four-storey building in less than 20 seconds to save a child, hashtagged #ParisSpiderman.

Refreshing my Twitter feed gave me bits and pieces of the secret identity of the mysterious #ParisSpiderman, then they flooded my Twitter feed. His name is Mamoudou Gassama and, an undocumented immigrant from Mali. “This is a much better—and more realistic—plot than Black Panther,” I thought to myself.

While refreshing the hashtag to try to get at this new hero’s origin story, it struck me that his religion was not mentioned, as this is usually the first adjective featured in clickbait headlines and hashtags when an immigrant does something negative.

Within hours, the headlines were reporting that #ParisSpiderman had been invited to meet the French president and that he would be granted citizenship. A typical zero to hero intro to a superhero story. With very little light shed on the details of the backstory, it highlighted the stereotypes (black, struggling, poor, ghetto-dwelling), with a quick fast-forward to the climactic scene where the unknown underdog hero saves the child in a public spectacle— and POW!—the introduction of a new “minority” hero, a new addition to the mostly-white superhero line up.

Here’s the missing backstory: Gassama left Mali as a teenager and traveled via [Burkina Faso], Libya—where he was arrested and beaten—to the coast, where he undertook a perilous boat journey to Italy. He spent four years in Italy before arriving in France in September 2017 to join his brother. Without the proper documentation to be in France, he had been sleeping on the floor of a residence for immigrants in Montreuil, outside Paris, rolling out a thin mattress each night and packing it up in the morning. He shared a cramped room with six others and was, of course, unable to work legally.

So scaling that building was probably one of the easiest things Mamoudou had done in years.

What readers should realize and what the storytellers need to do differently this time is to shed more light on the details of our hero’s life and the real hardships he’d had to endure before he scaled that building to save the child. Superman, the greatest of superheroes, was an immigrant but he was the “good kind”, the kind that looks “normal” and fits it, and doesn’t get randomly checked or surveilled.

Let the introduction of this new and different superhero make France, and the rest of the world, realize how many superheroes have come in on those boats that are still waiting for their intro scene.

Next issue: Is our hero going to cope with his five minutes of fame? How is he going manage now that his powers have been discovered?