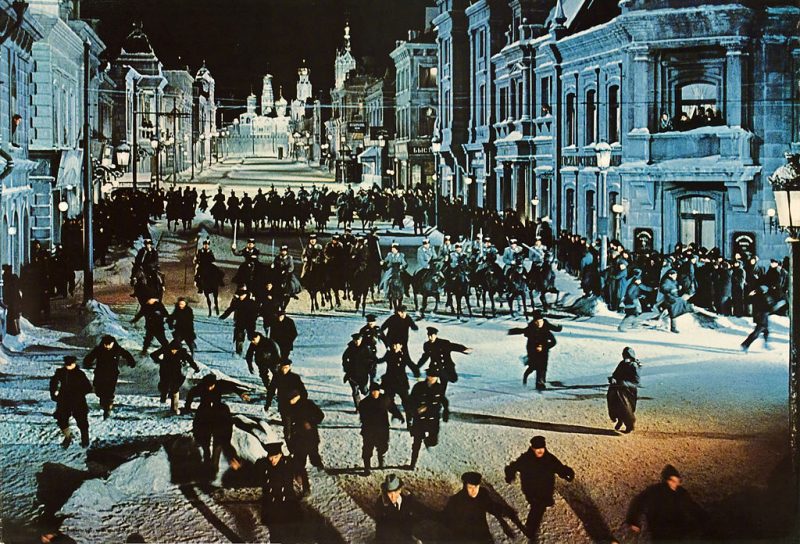 Cossacks attacking a peaceful demonstration: a still from the 1965 film Doctor Zhivago // Screencapped and cropped by Frederick Young, Wikicommons [1]

When demonstrators gathered on May 5, 2018, in Moscow to protest Russian President Vladimir Putin with the rallying cry “He’s not a tzar to us [2]“, they were confronted not only by riot police but also by a group of paramilitary Cossacks [3]wearing traditional uniforms [4] and camouflage fatigues.

In a scene that could have been lifted straight out of the film Dr. Zhivago, the Cossacks beat demonstrators with their nagaika (hardened leather whips), with full protection of the Russian OMON riot police (Otryad Mobilny Osobogo Naznacheniya or ‘Special Purpose Mobile Unit’ in Russian).

Traditionally a Russian frontier paramilitary force, and now regarded by the Russian state as an ethnic group, the Cossacks have guarded Russia's vast borders at various times throughout Russian history in exchange for relative independence under Tzarist rule. In the early 20th century, they assisted the state in dispersing anti-government protests and were also persecuted under Joseph Stalin [5]. Today, they operate in some Russian cities as auxiliary police who at times cause controversy for attacking [6] activists with impunity.

The Cossacks’ authority in relation to the state is varied, as they have no unified organizational structure. Cossacks may work in direct coordination with police or other state actors or may assume policing authority. In this case, the group in question will be providing security [7] during the 2018 World Cup in Russia. In other cases, they may act in their own interests.

The recent attacks were caught on video and Russian activists have been using the images to establish the Cossacks’ identities, going so far as to crowdsource efforts with the creation of a Telegram channel [8]“Database of provocateurs, strikebreakers, and mercenaries.” Now, these activists have also allegedly been doxxed and threatened.

As the Telegram channel name suggests, the Cossacks in question were allegedly part of the Central Cossack Battalion, an organization financed by the Moscow mayor's office [9] and trained to disperse protests.

The Telegram channel, which was started the day after the “He’s not a tzar to us” protests, immediately set to work to discover the exact identities of the Cossacks in question. The channel's authors accept submissions from the public, and after reviewing evidence, such as matching insignia and faces with images on public social media profiles, they verify information and post what they consider reputable.

Using this crowdsourcing method, they were able to identify several Cossacks from the Central Cossack Battalion. Although one member of the group was issued a small [10] fine [10] after the public outrage, the Central Cossack Battalion says that its members were not officially involved, claiming [11]that only a handful was present and suggesting that the others were street thugs disguised as Cossacks. This handful was reportedly flogged [12] by their comrades for their “unsanctioned” participation in the street brawls.

Cossack communities are historically concentrated in Russia's southern regions, Siberia and the Far East, but some newer ones have sprung up in central Russia. Cossacks have been known to complain about “impostors” who wear their traditional uniforms and insignia to operate as hired thugs usually ignored by the police.

While Cossack authorities attempted to distance themselves from the actions of a few of their members, the authors of the Telegram channel say they are now receiving death threats. They also report attempts made at hacking their devices and accounts. The Telegram channel authors took their story to the YouTube channel of Alexey Navalny, a leading anti-corruption activist, and blogger.

It all started with some attempts at hacking the Telegram bot, and then some pretty real threats started pouring in: ‘We’ll find you and hang you’, ‘We’ll kill you’. Later on the Internet a bunch of disinformation showed up, just made up facts about our lives. For example, they said I have a private plane, an apartment in New York, and dual citizenship…Aside from messages and calls with threats, today our administrators ran into some technical problems, and our devices are being subject to a coordinated virus attack.

These threats have come as self-proclaimed Cossacks declare open season [14] on the Telegram channel authors. Numerous groups have opened on Russian social media networks with the aim to replicate the activists’ crowdsourcing method to expose information about the activists who started “Database” Telegram channel. Many use the slogan “Wanted: Enemies of the people.”

As Nezavisimaya Gazeta newspaper reports, these groups contain inflammatory posts with messages such as, “What’s stopping us from bumping off the organizers of this resource?” and “Why haven’t they been shot?”

Alexandr Plyushev, a journalist at the independent Echo of Moscow radio station, sees this as the latest manifestation of doxxing wars [15] between government supporters and opposition activists. Calling the appearance of the “Database” channel long overdue, Plyushev said:

It’s strange that this type of thing has only just appeared, seeing as how this technology has long been used against opposition activists, both against specific leaders and crowds. The site Je Suis Maidan is well known, and for almost a year has been deanonymizing participants at demonstrations and directly threatening them. It carried another warning right before May 5th. Even earlier, the site Whoiswhos (now defunct) did something similar, focusing on opposition bloggers. A series of attacks on rank-and-file activists in St. Petersburg in the spring of 2016 was tied to the site’s work.

Plyushev fears these continuing escalations could be an early warning sign of another civil war in Russia.

Netizens also pointed out the discrepancy between an archaic paramilitary force violently dispersing a peaceful protest and the futuristic promises of Moscow's mayor:

Sergey Sobyanin [Moscow's mayor]: ‘Moscow is a modern megapolis on par with the leading capitals of the world and it's actively developing its human potential.’
Reality: on a central town square Cossacks, supported by riot police, are flogging the ‘human potential’ with leather whips.

The “Database” channel is determined to continue to be vigilant at any events where Cossacks are present. The authors have started a Facebook page [18] to ensure that information uncovered is broadcasted beyond Telegram.