Amid continuing crackdown on anti-government protests, Nicaraguans pay homage to those killed

The government suspended negotiations, sparking a second wave of protests 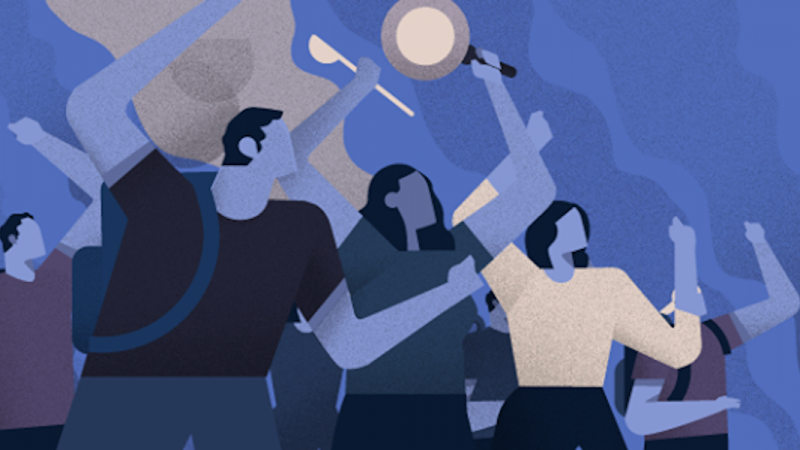 Detail of the image made by Pictoline and shared publicly to report on April protests in Nicaragua. Used with permission.

The political crisis that started in late April 2018 in Nicaragua continues. At least 76 people have been killed in protests that authorities have repressed with a heavy hand. On May 24, negotiations between the government and the opposition in the form of a “National Dialogue” were suspended, triggering a second wave of demonstrations.

The movement began as a backlash against plans to reduce social security payments, but has since turned into an outcry by citizens for Nicaraguan President Daniel Ortega and Vice President Rosario Murillo to step down after numerous human rights violations took place during the crackdowns.

The Inter-American Commission of Human Rights (CIDH in Spanish) reported that throughout April's protests there were illegal arrests and cases of torture and humiliation, as well as possible extrajudicial killings.

Image: Thousands have taken to the streets to protest the changes in social security and retirement payments. The government has censored independent TV channels, taken over universities and cracked down on protests with police and armed groups.

The CIDH condemned the killing of students; youth made up the largest number of protesters in April. The press also came under assault: a journalist was killed in the protests, local news sites reported experiencing Distributed Denial-of-Service (DDoS) attacks, and several TV networks were banned from broadcasting.

Negotiations to find a solution came to a halt when the government suspended dialogue on May 24, alleging that the opposition's intention was to “open the way” for a coup d'état. As a result, Nicaraguans have returned to the streets. So have the police and armed forces.

Since the start of this new series of protests, at least eight more people have been killed. Cases of alleged aggression from armed groups have been reported online, such as the one below detailed by Amnesty International Americas Director Erika Guevara:

Led by the hashtag #SOSNicaragua on Twitter, discussions for a national strike are underway, with activists publicizing special recipes online to keep strong for a long day of protests. Netizens are also widely sharing recommendations for communicating securely on or offline.

The government has demanded that protesters stop their mobilization and lift blockades that they've placed on different roads throughout the country to to limit people's movement. Protesters have counter-demanded that authorities end the repression, that para-police groups be dismantled, and that early elections be called to choose new leaders.

Given what happened in April, protesters and human right workers fear that violence will intensify because many believe the only way out of the crisis is a change of government. Videos are circulating online of Nicaraguans taking down First Lady and Vice President Rosario Murillo's “Trees of Life” monuments placed in 2013. Critics see Murillo's metallic trees as a display of absolute power, and pro-change activists have replaced her trees with real ones in a symbolic gesture:

26 of May, 5:40pm. The chayopalo [referring to the ‘Tree of Life’] in front of the school Teresiano, in the Masaya way. I recorded it.

YouTube memorials along with Facebook testimonies are providing a space for grieving those lost to the violence, including accounts from the mothers of four of the students killed in April. Others are discussing the role of women during the protests and the National Dialogue and reflecting on what the protests meant for many:

People look at the street with sorrow, knowing that a week ago the students who were fighting close to that place were sprayed with tear gas, and in the worst cases, were killed or jailed (and tortured). There's shame for not having done anything […] An elderly lady can't stop talking about what happened. She tries to tell people [about what happened] and compares it with Somoza [the family that held dictatorial power over Nicaragua from 1936 to 1979]. “This one is worse. This one knows how a dictatorship works” […] If something should be clear, it is that the youth won't ever be the same. We won't see the places where the massacre occurred in the same way.

Government supporters online have accused protesters of being “terrorists” and “criminals.” Memorial posters on the streets have been taken down, but activists have promised to continue to place them back up:

On Twitter and Facebook, artistic expressions and creative initiatives are helping to communicate the complexity of grief, hope, and fear that grip Nicaraguans:

Because we love Nicaragua! Because we want peace! An homage to those university students who are dead and to the pain of the Nicaraguan families that are suffering their loss! Something quick and improvised, but we did it. Thank you to all the dancers and parents that supported [us].