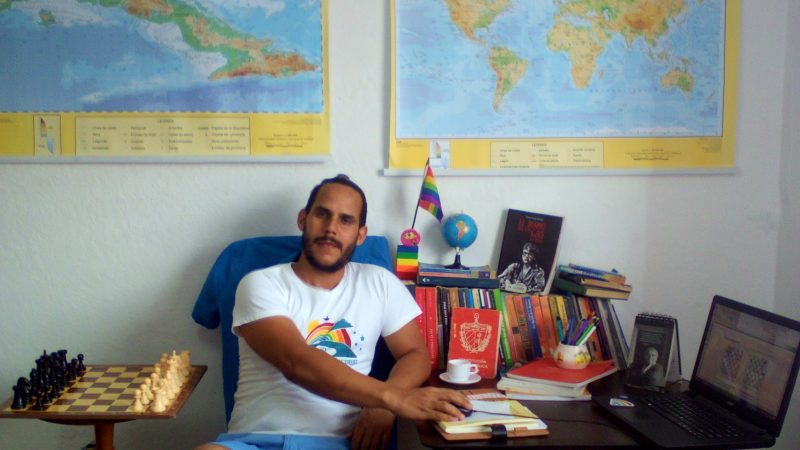 Yadiel Cepero is a young activist and computer science engineer who created a space for discussion on Facebook called “Building an agenda for sexual diversity in Cuba [1]“, in which nearly 150 people participate.

Cepero came to activism following his experience as a health and sexual rights advocate for the Youth Network of the National Center for Sexual Education (CENESEX). For two years he coordinated a project devoted to education about sexual health and rights called “Love at a Second Glance [2]” at the Havana-based University of Computer Science. In 2014, he was a delegate at the sixth regional conference of the International Lesbian, Gay, Bisexual, Trans and Intersex Association for Latin America and the Caribbean. He is currently a member of the youth organizing arm of the Oscar Arnulfo Romero Center, where he works with young people's initiatives promoting social equality.

The framework of the interview is based on the debates in Cuba over same-sex marriage [3], which isn't currently recognized in the island's constitution. The conversation took us to several interesting points in the debate, from the level of priority that people give same-sex marriage to the different lesbian, gay, bisexual, transgender, queer and intersex (LGBTQI) communities, as well as the pitfalls of legal texts that regulate the private lives of a country's citizens.

Global Voices (GV): In your opinion, why should there be a way for people of the same sex to legalize their relationship in Cuba?

Yadiel Cepero (YC): I think there should be a legal mechanism for this. Specifically because many legal procedures, including those that involve property that was purchased together, depend on the relationship being formalized and recognized by law. What this mechanism is called, whether it's same-sex marriage, consensual union, or something else, will depend on what our revolutionaries suggest and our ability to overcome the obstacles in our way. At the international level there are several countries that have included some of these mechanisms in their legal system. In Cuba, we are barely taking the first steps.

Personally, I don't think a legal contract guarantees the emotional stability of a relationship, but it can help to protect heritage, facilitate procedures, and avoid regrettable injustices. Depending of the scope of the legal mechanism, [we will see if] the right of same-sex couples to adopt [is included]. This is a topic that few people talk about in Cuba. It's complicated and is not without ethical questions.

GV: Do you think it will be necessary to hold a national consultation to decide whether legal unions between people of the same sex/gender should be allowed in Cuba?

YC: Personally, I believe that people's rights shouldn't be put through anyone's inquisitorial judgement, not even that of the majority. However, there are legal mechanisms that can't be left aside. For example, marriage is defined in the Constitution of the Republic of Cuba (article 36) as “the voluntarily established union between a man and a woman, who are legally fit to marry, in order to live together.”

The Family Code takes non-formal unions into account. Some important modifications could be introduced there regarding the recognition of legal unions that don't have the conditions to be formal marriages, all of it without a national consultation.

This second option seems the most plausible, but it has a limited reach. If it is approved, marriage would still be a constitutional right/privilege for couples of different sexes, while same-sex couples would have to settle for a non-formal union, or a consensual union, something that would accentuate discrimination further.

I should clarify nonetheless, that a legal union between people of the same sex is just one item within the agenda of sexual diversity. Therefore, I think that the starting point of any legal initiative should be discussed and that the agenda should be agreed upon taking into consideration the proposals coming from activists and organizations.

Regarding equal marriage itself, Cepero said:

I believe it's overrated. Historically, marriage has been a tool to preserve patriarchy, monogamy, and the the Judeo-Christian double standard. I respect those who take a chance on it, but I don't think that the debate has reached the level of depth that it should have. That's why I'd like to pose some questions for a future debate:

Why does equal marriage hog so many headlines? What place should it have in the agenda for sexual diversity?

Does it make sense to fight for equal marriage just because heterosexual people have it? What's the real reach of this legal mechanism?

When we talk about recognizing same-sex people's relationships, are we only talking about  relationships between two people? What happens with the collectives who are currently defending polyamory? Should their proposals be left out?

Will marriage make a difference for trans people, who consider access to medication and gender confirmation surgery as their priority?

Will marriage make a difference for lesbian women who want access to medically assisted reproduction in Cuba? Given that the protocol of the Ministry of Public Health is conceived for infertile couples, it wouldn't be enough to be united by marriage, as it is required that one member of the couple be infertile.

GV: Do you know of any case or anecdote in Cuba in which people who were not united by law experienced discrimination?

YC: I know of a lot of cases. Among them a friend, who couldn't keep the properties he had acquired with his partner when the latter passed away. It's a regrettable story. Years before, the father of the deceased partner had forced him out the home. After his death, the father received almost all of his son's belongings. Since the union was not legally recognized, there was very little to do through legal means.

Moreover, there are state establishments (restaurants, hotels and other places) that have special prices for couples, but they deny access to same-sex partners.

GV: Four years ago, a commenter named Ernesto Martínez Hernández said below an article [4] published by the newspaper Granma [5] (an entity of the Communist Party of Cuba), “Allowing gay marriage is disrespectful to society, just like allowing legal contracts between people and animals is not normal. It should not be legalized because it is not natural. There are couples who live their whole lives without getting married, [why] fight to legalize something that is not normal by nature?” How would you respond to that line of thinking?

YC: First of all, I'd like to clarify that the comment you're referring to was motivated by an article that was published in the online edition [5] of Granma's newspaper on May 6, 2014. In the article, journalist Lisandra Fariñas interviewed Gloria Careaga, who was then the co-secretary of the International Lesbian, Gay, Bisexual, Trans and Intersex Association [6] (ILGA). Ernesto's comment reflects the personal opinion of someone who's openly against same-sex marriage. It's his opinion, and I respect it, but his high degree of ignorance about the subject is clear. The concept of “normal” or “natural” is as relative as humanity itself. What is normal or natural for someone may not be the same for another and viceversa. It's been this way for a long time throughout history. During times of slavery, the purchase of human beings was “normal” or “natural,” something spurned or punishable today. If there is one thing I'm completely convinced of, it's that the love that we same-sex people profess to each other is just as legitimate as the love that heterosexual people profess to each other.