How ‘African’ is Northern Africa? 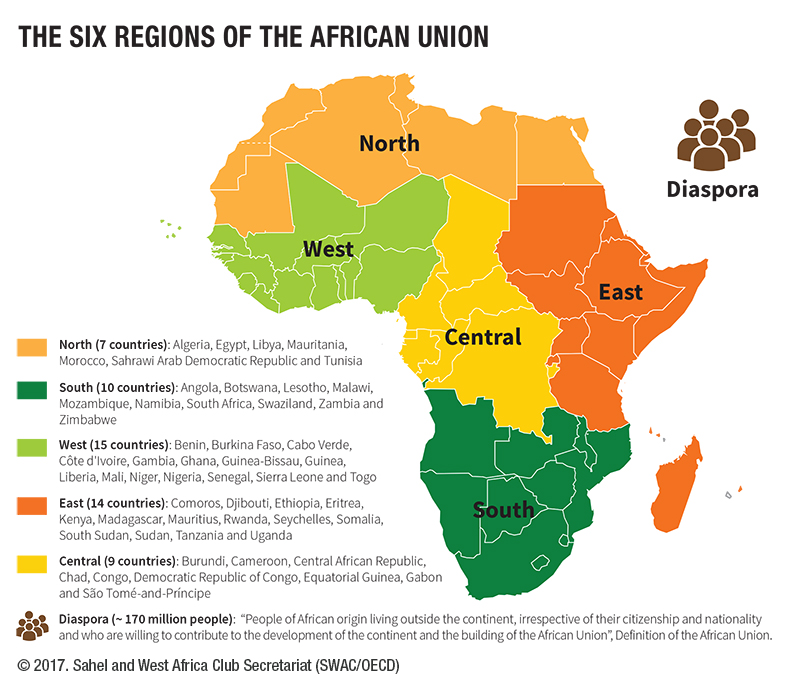 When the Egyptian Mohammed Salah won the 2017 African Footballer of the Year, the internet went into an uproar. Why? Some Africans did not think Salah was ‘African’ enough to have earned the title.

This is certainly not the first time, and probably won't be the last, that a North African's “Africanness” was questioned. In July 2015, The Guardian reported that Nigerian Chigozie Obioma was “the sole African writer on the longlist” for that year's Man Booker Prize for literature, overlooking the presence of Moroccan-born writer Leila Lalami among the 13 shortlistees.

Which raises the question: Why are Africans from north of the Sahara sometimes not considered definitively “African”?

North and south of the desert

The term “Sub-Saharan Africa” usually refers to the 46 countries that lie south of the Sahara Desert. Countries north of the Sahara, along with Sudan, are included in the geographical and geopolitical unit known as the “Middle East and North Africa region”, or MENA, as their linguistic, religious and cultural characteristics have more in common with the nations of the Middle East than with their neighbours south of the desert.

This divide has sparked heated debate among African intellectuals. Some blame colonialism for sowing the seeds of division, while others say the division existed much earlier.

The vision of the African Union

The organisation that theoretically unites the continent is the African Union (AU), which comprises all 55 sovereign states on the African continent, divided into five geographic regions: North, South, West, East, and Central. North Africa is made up of seven countries: Algeria, Egypt, Libya, Mauritania, Morocco, Sahrawi Arab Democratic Republic and Tunisia,

The AU traces its conception to Pan-Africanism, an intellectual movement which sought to strengthen African integration in the face of colonial intrusion. The main actors who formed the Organisation of African Unity, which later became the AU, were five heads of state, three from Sub-Saharan Africa and two from North Africa: Kwame Nkrumah, who later became the first president of Ghana, Sekou Toure of Guinea, Leopold Senghor of Senegal, Gamal Abdel Nasser of Egypt and Ahmed Ben Bella of Algeria.

North African leaders, therefore, played an equally important role in the formation of the African Union, the continent's most important geopolitical institution.

Yet many North Africans identify more as Arab or Arab-Muslim than as African, and it is the case that the “countries south of the Sahara have long been considered authentically “African” [emphasis added] while those to the north have been perceived as the Mediterranean, Middle Eastern or Islamic” argues Egyptian journalist Shahira Amin. In an article titled “Are Egyptians Africans or Arabs”, Amin gives an account about interviewing hundreds of Egyptians from various walks of life about how they viewed themselves:

My question raised a few eyebrows among people on the streets, the majority of whom replied ‘I’m a Muslim Arab, of course’ or “an Arab Muslim.’ They shrugged their shoulders and looked perplexed as they responded for wasn’t it an already-known fact that Egyptians are Arabs and that Egypt has a majority Muslim population? A few of the interviewees said that they ‘were descendants of the Pharoahs’ but surprisingly, none in the sample interviewed thought of themselves as Africans.

“I’m not surprised to hear about some Africans (particularly in sub-Saharan Africa) questioning the ‘Africanness’ of us, North Africans,” said Afef Abrougui, one of Global Voices MENA editors:

I come from Tunisia, and most Tunisians would identify as Arabs. There is this joke in Tunisia which says that Tunisians only feel African when our national team is playing in the African Cup of Nations. I don’t remember in school that we learnt that Tunisia was not ‘’African’’ but the country’s Arab- Muslim identity is emphasized, particularly in politics.

To give an example, in its preamble the 2014 Tunisian Constitution refers several times to the country’s Arab and Muslim identities, and only once to Africa. Of course, I understand why Tunisians would mostly identify as Arabs because of the language element. Growing up as a child it’s Syrian, Egyptian and Lebanese series and music that were on our televisions. This, however, is unfortunate because identifying as an Arab does not prevent one from also identifying as an African. Africa is diverse and we should celebrate that, instead of putting a label on what an African is.

For North Africans, the definition of ‘Africanness’ may also be related to influence and power. After independence, countries like Egypt and Algeria looked to the Middle East for a model of an Islamic nation, and north to Europe for economic partnerships.

… [the] Egypt regime's attitude of looking down towards Ethiopia ruined an amazing opportunity to collaborate and revive the African Union concept of the '60s. I think that the sense of detachment from Africanity among Egyptians comes from the lack of believing in a truth that's no longer factual or tangible. We're Africans, yes. The list-song of African countries the Nile River crosses was one of the first history lessons we learned in elementary school, some of us may even still remember it by heart so well, but over the last three decades the only time we were reminded we were Africans, we were referred to as Africans was during the Africa Cup of Nations.

As Algerian columnist Iman Amrani has written in The Guardian, the divide also has to do with the perpetuation of hierarchies of value in terms of skin color, class and race:

[C]ertainly there is something to be said about North Africans trying to distance themselves from ‘black Africa’.

Racism expressed by North Africans toward sub-Saharan Africans, however, does not justify its reverse. And the notion that “black” is the same as “African” is itself rooted in racism. For centuries, the term “Sub-Saharan Africa” has lumped together cultures and nations far more diverse and complex in terms of ethnicity, language, experience, and history, than the stereotypes would suggest.

Global Voices contributor Prudence Nyamishana from Uganda was forced to confront some of her preconceptions about North Africa on a recent visit to Cairo:

I dressed like a clown in a big dress and jeans underneath. I had a scarf ready to cover myself. I was told that women were supposed to be all covered because it is a Muslim country and all this stuff I had read on the Internet. When I boarded the Emirates flight from Dubai to Cairo, there were many Egyptian women dressed in fancy jeans with beautiful uncovered hair. I wanted to go to the bathroom to change my dress because I had got it all wrong… I understood that my prejudices and fears were all hidden in the disconnection between North Africa and the rest of Africa. The history of Arabs and slave trade, the news we get fed is from western media houses. At first being asked whether I was from Africa was irritating. But then I realised that the Egyptians that were asking me if I was African had never traveled outside their own country. Maybe if it was easy to travel within Africa these barriers would be broken down brick by brick.

Joey Ayoub, a Global Voices MENA editor from Lebanon, notes that unlike Pan-Arabism, Pan-Africanism did not become an ideal with institutional backing:

The divide between ‘black’ Sub-Saharan Africans and ‘Arab’ North Africa seems to me to be the result of Pan-Africanism occupying a different historical route than Pan-Arabism. Pan-Arabism ‘won’ in the sense that its narrative had more significant structural backing (Arab League). I also think it ‘won’ because the Palestinian cause coincided with the period of ‘anti-imperialism’.

Nwachukwu Egbunike, Global Voices contributor from Nigeria recalls that he wasn’t taught about Pan-Africanism in school:

Nigeria's fractured past, having fought a civil war, explains why history was kept out of high school curriculum. . . . Nonetheless, I grew up in a Nigeria when almost all our musicians sang about the horrors of Apartheid rule in South Africa. Thus, the deep-seated belief in Africa solidarity was a mark of my childhood…. Nonetheless, I am not oblivious to the equally prevalent dichotomy between black Sub Saharan Africa and Arab Northern Africa. I think the reason behind these labels is obvious, stereotypes need to be reinforced. I have come to realize that ethnic or racial bias are integral aspects of our deeply flawed humanity. People hide behind categories and labels because to do otherwise means a radical transformation; an encounter with that ‘other’ in truth and love.

“It is hard to recognize today Algeria, the country that Nelson Mandela said: “It's Algeria that made me a man,” said Global Voices contributor Abdoulaye Bah, a Guinean-born Italian formerly with the United Nations:

Algeria played a big role in liberating former colonies in Africa. That is why it is difficult to see today that this government issues racial laws stigmatizing and limiting the freedoms of blacks on its soil.

In Morocco and Tunisia also the Sub-Saharan suffers. Yet these two countries also played a great role in the creation of the Organization of African Unity. In addition, these two countries are becoming members of the African regional economic groupings, south of Sahara. Gamal Abdel Nasser's Egypt has also been very active in terms of African unity.

On the other hand, the citizens of some sub-Saharan countries did not need an entry visa [for some of these countries] when I was there the last time. In addition, all these countries have trained thousands of sub-Saharan academics. In my opinion, despite all that the Sub-Saharans endure in these countries, it is difficult to question their Africanity.

Political analyst Imad Mesdoua, an Algerian raised in Nigeria, asserts that the dichotomy between an Arab North Africa and a supposedly black Sub-Saharan Africa is false. Africans, says Mesdoua, are not defined by language, boundaries or geography but rather a “common history, binding values, and a common destiny.”

Perhaps, in the spirit of its founding Pan-African values and vision, the African Union should focus on deconstructing this divide between the north and sub-Saharan Africa and this common destiny.