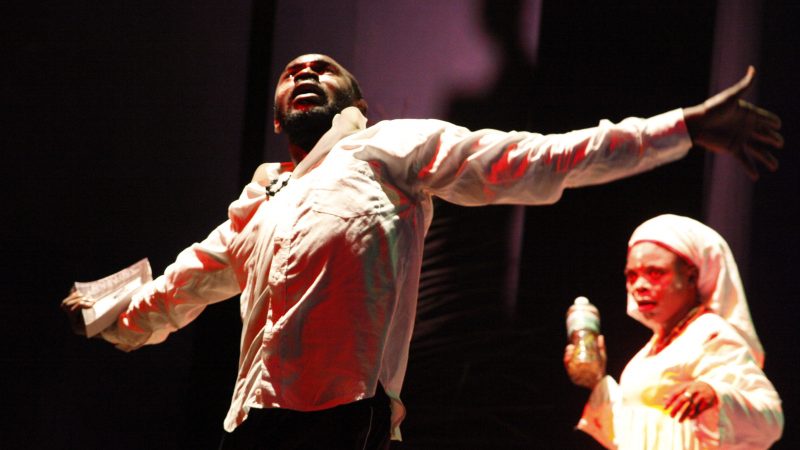 Recadero Sielbo Boturu (left): “Traditional rituals in Equatorial Guinea are attached to theater, or maybe it is theater the one that is attached to all the rituals. In an adaptation, it is enough to give a small allusion any of this to get a reaction from the audience. ” Photography courtesy of the Bocamandja theater company, used with permission.

Bocamandja, a theater company in Equatorial Guinea in Central Africa, provokes and plants questions in a country where those in power make people grin and bear whatever is thrown at them. The performers take risks and tell painful truths while also making the audience double over with laughter. Director Recaredo Silebo Boturu is the man behind Bcoamandja — a poet, playwright who describes himself as an “outraged artist”.

Bocamandja's myriad facets make it exceptional. Full of talented actors and creators, Bocamandja celebrates14 years of existence as a pioneer in producing nearly all of the dramatic works by authors published in Equatorial Guinea. The company also highlights the influence of oral traditions that characterize the country's theater.

The story of Boturu's relationship with Bocamandja is one of impulse and inspiration, but also of challenge and struggle. In this conversation, Global Voices spoke with Boturu about the origins of Bocamandja, what pushes each to continue, and the profound effect that performing art has on its participants.

Global Voices (GV): When did your connection to theater begin?

Recaredo Silebo Boturu (RB): When I was a kid I left my town, Bareso. I remember my mother packed me off with a suitcase and a bag and sent me to the city to continue my studies with a host family. In Malabo, I met the boyfriend of one of my cousins (one of the daughters of the lady who took care of me), Liki Loribo, and it was him who discovered me and invited me to watch one of the rehearsals of a theater group (ESA’A) that together with ‘Hijas del Sol’, another artistic collective, had formed a cultural group with the objective to recreate the Bubi culture, which is one of the ethnic groups of Equatorial Guinea, through theater and dance.

At first, it was difficult because I had always been shy (even if it doesn’t look like it), but later I got hooked and the following year I took to the stage for the first time. In 1997, when ‘Hijas del Sol’ were already in Spain, circumstances made Liki leave the country, and I was left in charge of the group.

GV: The creation of Bocamandja is related mainly to the theater movement that existed under the sponsorship of the Cultural Center of Hispanic Guineans, and later with the challenge of reviving the art form once the Cultural Center had closed its doors:

RB: It was as if a tornado swept everything away. A year after the [Cultural] Center closed, all of the groups disappeared. All of them. In 2005, finally our persistence would allow us create Bocamandja. The name, although it sounds Spanish, is the union of the names of two typical dishes in the country, the bacao and mandjaa.

From the moment we decided to create Bocamandja, it was very clear we could not operate under the umbrella of any other entity. We had to have our own autonomy so as not to end up as the other groups had.

The multicultural “Orígenes” (Origins) project was created in 2008 and came about through a joint endeavor between Bocamandja and the Spanish company L’Om Imprebís, the Centro Internacional de Teatro Actual (International Center of Contemporary Theater) Casa África (Africa House) and the Spanish Cultural Centers in the cities of Bata and Malabo.

The three-year collaboration focused on the creation of a stable theater space to unite artists from the five main ethnic groups that make up Equatorial Guinea. It entailed more than 50 hours of dances, rituals, and celebrations recorded for a documentary that also included footage from the training and creation process. The project did not meet all its desired goals, but as an artistic initiative, it reminded participants what was missing from Equatorial Guinea's cultural life:

RB: In a country that does not have proper artistic training schools, Orígenes offered three years of continued learning in diction, speech, choreography, discipline, and above all, gave many young people the opportunity to realize that to be an actor or dancer could be a profession.

GV: What did the Orígenes tour mean for a country that is talked about mainly from the point of view of politics?

RB: When we're together we speak about Orígenes with a beautiful nostalgia for the possibilities and the lost opportunities on the part of our country for people to get to know the greatness of its oral culture and magic of theater.

Professionally, Orígenes raised the bar on performances. However, when projects have no continuity they end up as dreams of what could have been. I don’t know what repercussions the project had in Guinea because in the end it didn't get any sponsorship, maybe due to a lack of economic interest.

GV: How does theater connect to the African oral tradition and in the different towns/ethnic groups in Equatorial Guinea?

RB: Traditional rituals in Equatorial Guinea are attached to theater, or maybe it is theater the one that is attached to all the rituals. In an adaptation, it is enough to give a small allusion any of this to get a reaction from the audience. If you witness a traditional Fang wedding, a funeral in Annobon, or (the dance) Bonkó krió, or the ceremony that introduces of a child into society, the Ripuripuri Bubi, you’ll realize what I am telling you.

A theater company, a school, a fearless organization 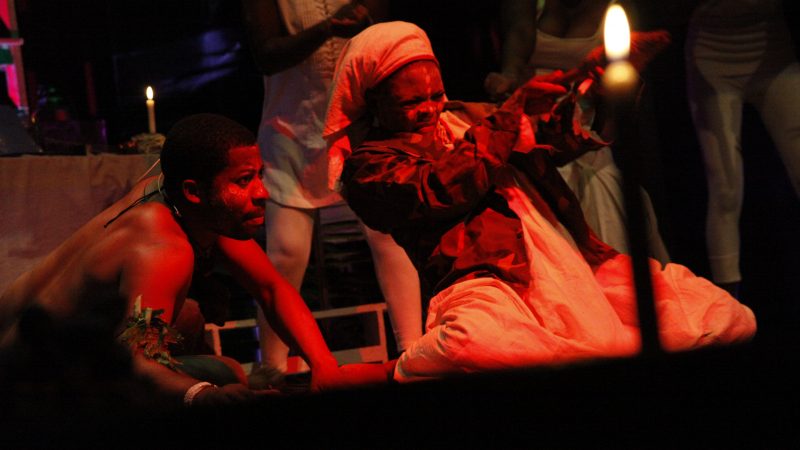 “We were putting on a show in a public square in front of more than three hundred people when, right in the middle of it, the mayor came over to tell me that the governor was ordering us to stop the show: We were ‘hurting’ the military's feelings.” Photograph courtesy of Bocamandja, and used with permission.

Bocamandja is more than a theater company. As a non-governmental organization, Bocamandja has helped produce works with national and international organizations with a social justice mission. For example, they promote campaigns to support schooling for young girls and engage in projects defending human rights and ending gender-related violence and discrimination.

The company has also worked on adapting texts of authors from Europe, Latin America, and Africa. Their productions have traveled across Equatorial Guinea, Spain and Colombia.

Bocamandja has not been immune to censorship. One piece about denouncing mistreatment by the military was interrupted in the middle of a production:

RB: We were putting on a piece in a public square in front of more than 300 people when, in the middle of it, the mayor came over to tell me that the governor was ordering us to stop the production: we were ‘hurting’ the military's feelings. The strangest thing was that those concerned who had attended the production were enthusiastically applauding. In the end, we had to stop as the audience remained passive.

In other cases, Bocamandjaa's work had a more uplifting effect thanks to the actors bringing complex topics to the table:

RB: In contrast, I remember that after a production, in the María Auxiliadora school in the Ela Nguema area of Malabo, of a piece about HIV, an old man came over to congratulate us and say thank you that, thanks to our work, he was no longer afraid to say that he was HIV positive. It was an incredible feeling in a city where people living with HIV and AIDS are singled out and stigmatized.

GV: What influences you when you are writing a piece?

RB: In many awareness-raising projects we use techniques from the Theatre of the Oppressed, which is a trend devised by the Brazilian playwright, actor, director and theatrical educator Augusto Boal in the 60s. In his words, the goal of the Theatre of the Oppressed is to ;humanize humanity’ and ‘dramatize’ reality, (returning it to gestures and making it comprehensible in the language of the theatre) in order to understand it and then to be able to change it.

GV: What role does the public play in the productions?

RB: Crucial. You can't have a theatrical production without the public, they are the judges.

GV: You are a playwright and you manage a company, what changes do you see in the actors and actresses as they spend longer with the company?

RB: It is amazing to watch them learn to move, speak, gesticulate, and to vocalize, but above all, to realise the need to train yourself continuously in order to be able to face any challenges. When they have spent a certain amount of time working, you realise that they have an interior defiance that makes them face things head on.

RB: I need theater to be myself, without ties, in order to have my particular way of showing my voice, of seeing the world from other perspectives or through a different lens, to be pissed and indignant by injustices and to be militant in the defence of the vulnerable. I need theater to be in love with this goddamn life.