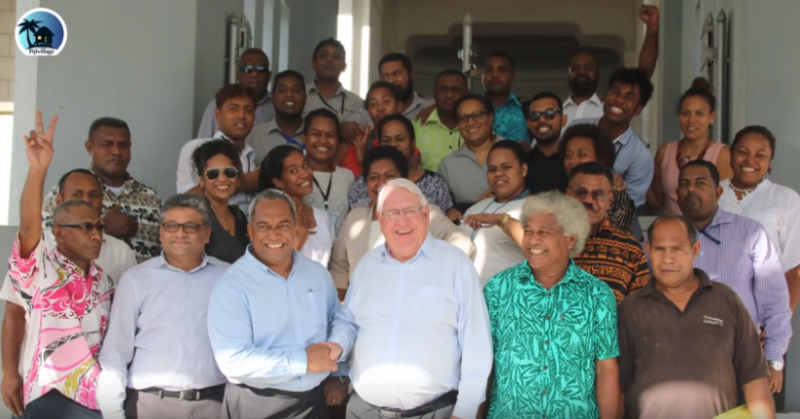 Fiji Times executives and supporters celebrate the court verdict which acquitted the paper of sedition charges. Screenshot from the YouTube video uploaded by Fijivillage CFL

The Fiji Times, its three executives, and an opinion columnist were cleared of the sedition charges filed by the Fiji government after a High Court judge concurred with the ‘not guilty’ ruling of the court’s three assessors.

On April 27, 2016, weekly indigenous-language newspaper Nai Lalakai published a letter by Josaia Waqabaca which tackled the need for a national reconciliation between the country’s indigenous population and Muslim minority groups. Nai Lalakai is part of Fiji Times Ltd.

Two months later, charges of inciting communal hatred were filed by the Fiji government against Waqabaca, Nai Lalakai Editor Anare Ravula, Fiji Times Editor-in-chief Fred Wesley, and the paper’s publisher and general manager Hank Art. The government said the article “promoted feelings of ill will and hostility among Muslims and non-Muslims.” A year later, the charges were amended to sedition which carries a maximum prison sentence of seven years.

On May 18, 2018, the court’s three assessors ruled in favor of the accused. After four days, this decision was affirmed by High Court judge Justice Thushara Rajasinghe who said that the prosecution failed to prove beyond reasonable doubt that the accused abetted and committed sedition.

The ruling was welcomed by several regional and global media monitoring groups as a victory of free speech in Fiji. Many consider Fiji Times to be the last independent media outlet in the country where free speech has been undermined ever since the military took power in 2006. Elections were held in 2014 but threats against media freedom have remained.

Reacting to the court verdict, Art said the newspaper will continue to fulfill its mission:

We should now be encouraged to keep going with the way we have been, stay within the law and decency but report honestly and balanced without fear.

Wesley insisted that the paper is working neither in favor nor against the government:

We will continue to endeavour to stay true to the ideals of good journalism.

We are not pro-government, and neither are we antigovernment.

We will endeavour to allow a platform that offers people, irrespective of their political leaning, an opportunity to voice their concerns.

It has become quite obvious that the government of Fiji has continued to charge people with sedition to suppress freedom of speech and also political dissent. This particular case and outcome is a huge victory for the people of Fiji.

Fijian Media Association reminded the government that there are other ways to correct the mistakes of the media without going to the courts:

The decision is important not only for Fiji Times, but for the media in Fiji and the wider Pacific region. We applaud our colleagues at Fiji Times for their tenacity and resolve in fighting for and protecting media freedom and democracy in our region for the past two years.

Fiji’s Office of the Director of Public Prosecutions will appeal the ruling of the High Court.