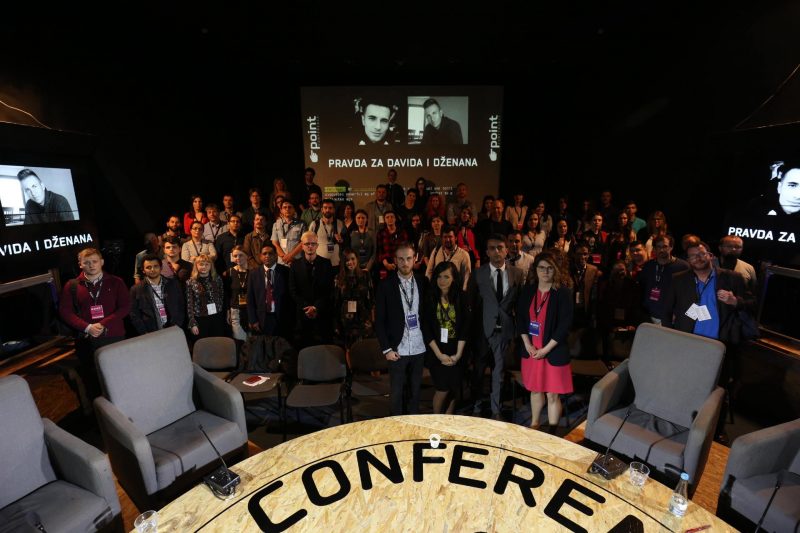 International attention for “Justice for David and Dženan”: the participants of the Political Accountability and New Technologies – POINT conference in Sarajevo stand in silence in support of protest movement demanding justice for murdered youths (17.05.2018). Photo by Vanja Čerimagić, used with permission.

This is an expanded and edited version of an article by the same author published by NewsMavens.

The death of David Dragičević in Banja Luka, the informal capital of Republika Srpska (a legal entity within Bosnia and Herzegovina-BIH), was declared an accident, but police missteps and a lack of transparency have sparked demonstrations as protestors are gathering to demand a new investigation and more openness from the government.

Dragičević, 21 years old, went missing on March 18, 2018. His body was found washed up on a riverbank in Banja Luka six days later. Following his death, the police made contradictory statements and drew conclusions that led Dragičević's parents and many others to believe that he was murdered.

The Alliance of Independent Social Democrats and its leader Milorad Dodik have ruled Republika Srpska in an authoritarian manner for over a decade, establishing a routine strategy for dealing with dissent. Their go-to reaction to protests would always be channeled through pro-government media, which would declare that the protest's cause was being instrumentalized for political purposes. In many cases, those claims were accompanied by the assertion that “secret services and international actors” were attempting a coup against Dodik and his government, using the protestors as more or less unsuspecting puppets.

The same thing happened last month, when, on the eve of the biggest protest gathering, announced for 21 April, a tabloid from Serbia published an article expressing the same claims which quickly spread through several media outlets in Republika Srpska. Similar maneuvers in the past have, more often than not, proven to be effective.

This time, however, protesters calling for a new investigation into David Dragičević's death paid no attention to government-directed media spin. On April 21, they gathered in unprecedented numbers, with an estimated 10,000 participants present. The following video provides an aerial view of the events:

The slogan “Justice for David” is now spreading both offline and online. A Facebook group with the same name (“Pravda za Davida” in Bosnian/Croatian/Serbian) has attracted over 323,000 members from all over the region. In subsequent weeks, the unrest has spread to other regions outside of Banja Luka.

After various media outlets failed in their attempt to portray the protests as a conspiracy, the Ministry of Internal affairs threatened to sue Dragičević's father for his accusations of a cover-up against the police, an action explicitly prohibited to public institutions by law.

Numerous local and regional groups have begun organizing protests in support of Dragičević in various Bosnian towns and the diaspora. For instance, the 1,300-member  “Pravda za Davida – Kozarska Dubica”  hailing from Dubica, a municipality with 23,000 citizens. Online activism has resulted in packed town squares, like the one during the 8 May protest in Modriča, a center of municipality of similar size to Dubica, depicted in the following video. Protesters stand in silence using the signature gesture of a raised right fist used by David Dragičević's father.

Protesters have also been demanding justice in the case of another murdered youth, Dženan Memić from the BIH capital city of Sarajevo. His death in February 2016 was initially declared a traffic accident and led his family on a grueling struggle to reveal the truth. Several protests in support of the Memić family have taken place in Sarajevo over the past two years. The last one was on May 16 and was joined by David Dagičević's father, under the slogan “Justice for Dženan and David”.

Justice for David; Till the end; We aren't going anywhere; We are staying here!

In an election year in Bosnia, the stakes are high as protestors face accusations of “political instrumentalization.” Journalist Tanja Topić, writing for the independent Belgrade weekly Vreme on May 17, summarized the significance of the protest movement:

‘Justice for David’ is completely new and different collective behavior and it's hard to predict how the events will unfold. At the great protest, which took place on 21 April this year, there were more citizens than the combined number of participants of the big rally and counter-rally organized by the government and the opposition in Banja Luka two years ago. At the protest, citizens from the whole Bosnia and Herzegovina demanding justice for David also demanded solving of all other unsolved murders. All ethnic and religious divisions among the people had been erased on the gatherings on Banja Luka square, which presents a particular problem for the ruling ethno-nationalists.