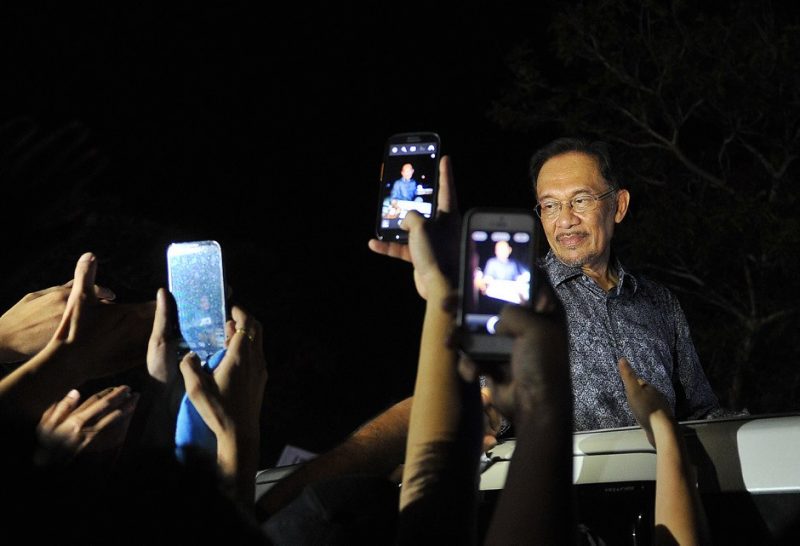 Malaysian opposition leader Anwar Ibrahim greets his supporters during a rally in 2013, a year before his incarceration. He was released on May 16, 2018, a few days after the victory of the opposition party. He is expected to assume a big role in the new government headed by Prime Minister Mahathir Mohamad. Photo by Flickr user Firdaus Latif (CC BY-NC-ND 2.0)

Civil society groups are urging Malaysia’s new government to uphold its election campaign pledge of enacting reforms in governance which include the abolition of laws that undermine free speech.

On May 9, 2018, the Pakatan Harapan (PH) party defeated Barisan Nasional (BN) which has dominated Malaysian politics over the past 60 years. BN’s defeat was attributed to the people’s clamor for a change in leadership after former Prime Minister Najib Razak was implicated in several corruption scandals. The Najib government was also accused of using repressive laws to detain opposition leaders, intimidate critics, and censor the media.

During the campaign period, PH released a manifesto which listed some of the immediate reforms it will implement if it succeeds in the polls such as the establishment of a media council made up of media leaders and the revision of all draconian laws.

Now that PH is the head of the new government, various civil society groups are reminding it to fulfill its commitment to reverse the oppressive laws, policies, and programs existing under the previous ruling party.

…rights to freedom of expression and association, better protections for refugees and people seeking asylum, respecting the rights of Indigenous Peoples, protecting LGBTI individuals, abolishing the death penalty and ending the persecution of human rights defenders.

The Lawyers for Liberty asked the new government to unblock the websites and blogs blocked by the Malaysian Communications and Multimedia Commission (MCMC). These websites were blocked by MCMC for reporting about the corruption cases of Najib.

It also joined other groups in calling for the immediate repeal of laws that were often used by authorities to attack human rights advocates and critics of the government such as the Sedition Act 1948, Prevention of Crime Act 1959, Prevention of Terrorism Act 2015, Communications and Multimedia Act 1998, and the recently passed Anti-Fake News Act 2018.

So far, the initial response of the new government has been welcomed by many people.

First, it worked for the release of former opposition leader Anwar Ibrahim who had been under hospital arrest on politically motivated charges of corruption and sodomy.

The PH-led government also formed a Committee on Institutional Reforms to accept proposals on reforming the bureaucracy.

Some news websites were also unblocked on May 17 such as the Sarawak Report and Medium.

The travel ban on political cartoonist and activist Zunar, a fierce critic of Najib, was also lifted on May 14.

The new home minister also affirmed that the government will quickly review controversial laws like the Sedition Act.

New Home Minister Muhyiddin Yassin says his ministry will review laws such as the Sedition Act in consultation with activists etc, look at border security, defend the sovereignty of Sabah and Sarawak, resolve stateless Indian issues, talk to UNHCR about Rohingya issues. pic.twitter.com/yOtp1fCyAo

But a statement by Prime Minister Mahathir Mohamad that the government will amend the anti-Fake News law by providing a clear definition of what constitutes fake news has alarmed civil society organizations because PH has earlier vowed to abolish the law.

The Sarawak Report explained why the entire law must be scrapped:

Journalists and citizens must be allowed speak freely and even be allowed to get it wrong, if they can show their intentions were to inform about something they genuinely had good reason to believe and are willing to correct and amend if found mistaken (as opposed to intended and malicious lies). These are the principles that have now evolved after much pain and argument in most modern democracies and Malaysia would do well to join them.

Around 20 civil society organizations signed a statement expressing disappointment over the “mixed messages from the ruling coalition on the repeal of the Anti-Fake News Act.” They proposed an alternative:

We believe that the more effective solution to any disinformation and misinformation is the enactment of a Freedom of Information Act at the federal level.

They also reminded PH that legislative reforms are not enough to undo what BN has done to Malaysian bureaucracy:

…legislative reform must go hand-in-hand with the restructuring of national institutions to ensure accountability, independence, and respect for human rights. Moreover, the new government must meaningfully engage civil society in a program of reform that is inclusive and participatory.

Human rights groups also criticized the police for arresting a man who “insulted” Prime Minister Mahathir on Facebook. The police said they merely responded to a complaint lodged against the suspect:

Veteran politician Lim Kit Siang asserted that this behavior of the police should change in the “new” Malaysia:

In the New Malaysia, police response must not depend of “who” lodges police reports, but “what” was in the police report, and actions where civil remedy is available should not be criminalised just because the subject-matter involves the Prime Minister or any Minister for that matter.

Mahathir said he also disagreed with the action taken by the police and said the parliament will prioritize the review of vague laws that criminalize the mere criticism of public officials.

The Centre for Independent Journalism welcomed the statement of Mahathir with regard to this incident and appealed for a moratorium on the use of repressive laws that continue to have a chilling effect in society. The group also summarized the challenge posed by free speech advocates to the new government:

It is critical at this juncture for the Pakatan Harapan coalition government to commit to defending a vibrant space for public discussion as the nation is headed towards transformation, to enable greater public participation in this process. This include clearly and unequivocally defending the right to freedom of expression, whether offline or online.