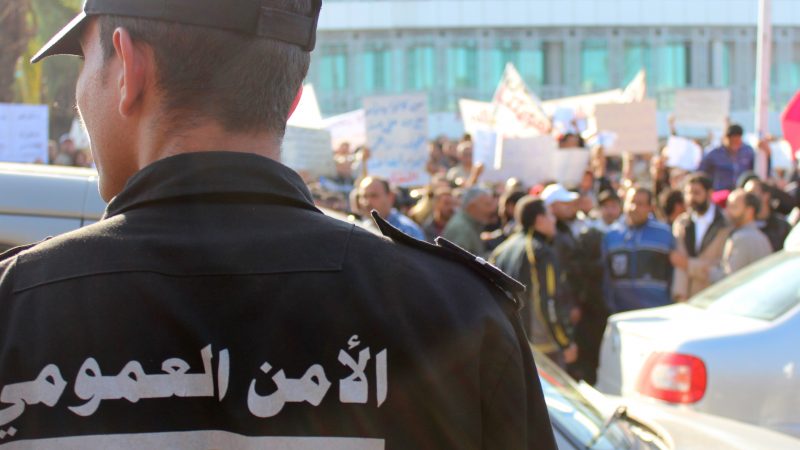 In Tunisia, police are obligated to protect journalists not only because they are citizens, but also because attacks against journalists are a crime punishable by jail time. But when coverage has questioned the conduct of security institutions, law enforcement officials and their powerful unions have too often ignored duty and issued direct threats against media workers — both online and off.

These attacks have largely gone unpunished. To further complicate the situation, a controversial draft law promoted by the interior ministry and the police unions would create a new layer of protection for security forces, shielding them from criticism and accountability mechanisms.

“Some of these unions represent a serious threat to the rule of law, as they aim to establish a police supremacy over other citizens: full powers, complete freedom and total impunity,” journalist and radio commentator Haythem El Mekki told Global Voices in an email interview.

El Mekki himself was the target of such abuse. Throughout January, as anti-austerity protesters took to the street, the government responded with a heavy hand, with police detaining and harassing several journalists while they were doing their work. On 29 January 2018, El Mekki and Mosaique FM radio host Boubaker Ben Akecha invited a member of the journalists’ union to discuss the issue.

A day later, Wahid Mabrouk, the secretary-general of the Gafsa region's internal security forces union, called El Mekki and Ben Akecha “media’s bacteria” in Facebook posts. “What you air on Mosaique FM is but poison that you’re spreading in our society,” he wrote. Mabrouk also called on Tunisians to boycott their radio program and declared, “may you [the two journalists] suffer from an incurable disease.”

The posts weren't the only case of law enforcement attacking journalists and media for drawing attention to violations. “We documented [cases of] dangerous speech, statements and positions inciting to violence against journalists and their union. We have been targeted in a way that clearly demonises us,” Mohamed Yousfi, the National Syndicate of Tunisian Journalists (SNJT) board's assistant secretary-general on press freedom issues, told Global Voices.

Yousfi pointed to one instance involving the branch of the internal security forces’ union in Sfax (270 kilometers south of Tunis). After the SNJT spoke out against the interior ministry's press freedom policies, the official Facebook page of the regional internal security forces union published a post describing journalists as “traitors.” And the branch's spokesperson, Noureddine Ghattasi, insulted journalists on his personal Facebook page and went as far as to call on police to rape them: ”The men of the interior [ministry] can make you pee blood and can get the male pregnant before the female,” he wrote.

These threats have a chilling effect on press freedom in Tunisia, particularly at a time when human rights groups, journalists and activists continue to raise questions about abuse by security officers. Just recently, in early May 2018, video footage that circulated online showed police officers chasing and assaulting two brothers, after the end of the match of their local basketball team. And on 1 April, the supporter of one of Tunisia’s most popular football teams drowned in a canal as he was chased by police.

Tunisia’s police unions: a threat to democracy and human rights?

Days after the fall of the Ben Ali regime in January 2011, members of the Tunisian security forces began street demonstrations and general strikes all over the country, asking for — among other rights — the right to form unions. Interim authorities accepted their demands, and the Internal Security Forces’ Union (SNFSI) was created in March 2011. In May of the same year, the Internal Security Forces (ISF) statute was amended to allow the police to form unions.

Since then, most of the interior ministry's different services established their own unions. In addition to the SNFSI, there are two other big unions: the Syndicate of Officials of the General Directorate of the Intervention Units (SFDGUI), and the National Union of Syndicates of Tunisian Security Forces (UNSFST). Each of these unions has regional branches.

These unions have proven to be powerful, and have often acted above the law, going so far as to defy the judiciary. On 26 February, 50 members of the Syndicate of Officials of the General Directorate of Public Security (SFDGSP) invaded a court in Ben Arous (southern suburbs of Tunis), to demand the release of five police officers who were on trial for torture. Brandishing their guns, the protesting officers called on its members to protest within the court and not to ensure the security of the trial.

The Ben Arous court incident has further put police conduct and abuse under the spotlight. In a joint open letter, 16 local and international human rights groups described what happened at the court as an ”indicator of the prevailing impunity in Tunisia”, and called on the government to end ”impunity that prevails for human rights violations by the Tunisian security forces.”

“Hate speech and campaigns of demonization and incitement to violence against journalists directly threaten press freedom since they place the professional and physical integrity of journalists at risk and create a culture of self-censorship to the detriment of press freedom and the right to information,” Yousfi said.

He continued: “With [their] militia practices” some security unions “have become the arms of the interior ministry and a few of its leaders, to target the national syndicate of journalists and workers of the media sector.”

It is not hard to see why Yousfi sees a link between the conduct of police unions and the interior ministry’s policies.

After all, the ministry together with police unions has been pushing for a bill “on the protection of the security forces from attacks.” If adopted, the bill would restrict freedom of the press, speech and assembly by criminalizing speech deemed “denigrating” towards the police and banning unauthorized filming or recording inside security and military headquarters and at sites of military and security operations.

Rights groups have also slammed the bill over provisions that would shield police from criminal liability for use of excessive and/or lethal force to repel attacks against their homes, vehicles, police and security headquarters, and the military's arms and ammunition storage facilities.

Although submitted to the parliament more than three years ago, the bill has not been adopted yet, and several members of parliament (MP) expressed concerns that it threatens freedoms. This delay has angered police unions. In November 2017, after a police officer died in a knife attack, they threatened to stop providing personal protection to MPs and political party leaders if the parliament does not approve the bill within two weeks. Those threats are ”tantamount to blackmail,” Sharan Grewal, who researches democratization in the Middle East, wrote in a paper on the need ”to reign in Tunisia's police unions.”

The parliament responded by resuming the bill’s discussion at the legislative commission and inviting human rights groups and security unions to discuss their recommendations. In January 2018, at the parliament’s security and defense commission, interior minister Lotfi Brahem reiterated the ministry’s demand for a legal framework to protect security and armed forces.

Impunity for abuses “is almost becoming a norm”

At the same time, the authorities have not done enough to address threats against journalists, making it less likely that those responsible are held to account, according to the journalists’ union. The interior ministry “rejected the principle of dialogue” and the current minister “did not bother to address abuses by security forces’ unions,” Yousfi said. “Members of security unions who have been involved in such violations are after all affiliated with the interior ministry as officers and employees, and they should be held to account,” he added.

According to article 14 of the 2011 press code, journalists are considered “public servants”; therefore, anyone who intimidates, attacks or threatens them by any means (including online) could face up to one year of imprisonment and a fine of 120 Tunisian dinars (47 US dollars) in accordance with article 125 of the penal code. Yet, no judicial conviction of a member of the security forces or of their unions has happened, even though several complaints were filed and numerous investigations conducted.

A 2018 study by the SNJT documented 25 complaints submitted to the judiciary by journalists who were victims of attacks.

By the time the findings of the study were published in February, 44% of these complaints were still in the early investigation process, which led 93.4% of polled journalists to believe that the judicial procedure is often slow.

64.4% of the polled journalists who reported that they were attacked by security forces said they did not receive any apology from the police or the ministry of interior. Furthermore, only 4.5% of the perpetrators were administratively punished.

Journalist Haythem El Mekki, who has filed such a complaint, is not confident about the seriousness of the judicial process. “I did not get any response about my complaint, although this does not surprise me,” he told Global Voices.

While the Sfax prosecutor started an investigation against Ghattassi, who threatened journalists with rape, it remains unclear whether it will lead to any conviction. He, along with three other police officers, was expelled from the union representing internal security forces, for “immoral behavior towards others”, the union said in a statement published on 5 February. The statement did not state attacks against journalists as the reason behind this decision.

Impunity for abuses committed by police unions and security forces “is almost becoming a norm that should not be normalised,” Yousfi warned.