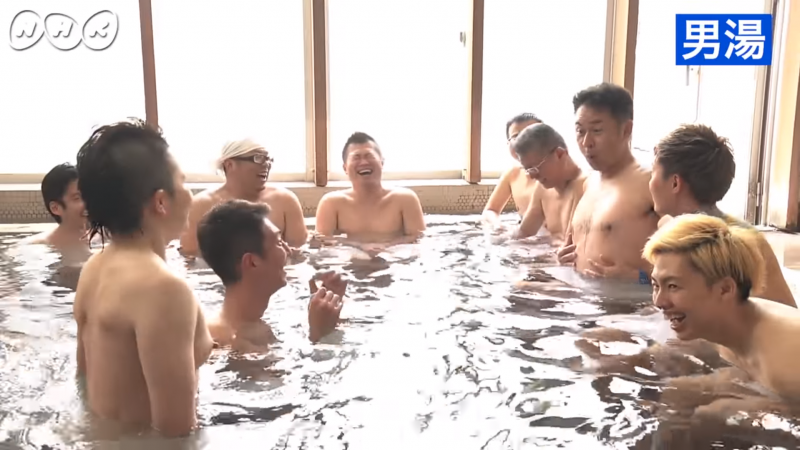 People who identify as male enjoy a transgender-friendly bath in Beppu, Japan. Screencap from NHK / YouTube.

Japan's “hot spring capital” is trying to find ways to make one of the country's most popular pastimes more inclusive for people who identify as LGBT, when most public baths are segregated according to a binary of either “male” or “female”.

The Rainbow Furoject (‘furoject’ is a portmanteau of the Japanese word for ‘bath’, ofuro, お風呂, and project’) is an initiative of the city of Beppu, located in Oita Prefecture on the southwestern Japanese island of Kyushu.

On May 1, 2018, forty people, including members of the LGBT community as well as Beppu residents came together at a hot spring resort operated by the municipality to bathe together and brainstorm ideas to make it easier for people who identify as LGBT to enjoy bathing in hot springs in Japan.

To help answer the question “what can we do to make sure anyone can enjoy a dip in a hot spring?”, rather than dividing bathers (by binary gender), instead participants came up with three ways of organizing bathers in order to accommodate every gender: how one looks “on the outside”, how one's sex is recognized in official documents, and by which sexuality one identifies with oneself.

According to organizers of the event, it's difficult for many members of the LGBT community, especially those who identify as transgender, and not always according to the gender binary of male/female, to easily enjoy communal bathing. Hot springs and public baths in Japan are almost always segregated into “male” baths and “female” baths, with no recognition of gender fluidity.

Bathing in hot springs or public baths is a big part of Japanese culture. It's estimated there are at least 27,000 hot springs in use in Japan, and 3,500 of them are in Oita Prefecture, the most of any prefecture. Hot spring towns like Beppu, home to clusters of hotels to suit every taste and every budget, have been popular vacation destinations in Japan for at least a thousand years.

As well, most municipalities will also operate subsidized public hot spring baths for locals to relax and take a dip, typically with family, friends or coworkers.

Oita's Beppu, one of the most famous hot spring towns in Japan, has regularly tried out different strategies for appealing to visitors, including creating a bathtub theme park and launching a PR campaign for the resort that featured Olympic synchronized swimmers taking over a hot spring bath.

The May 1 LGBT Furoject was hosted by Kitahama Onsen Termas, a day-use hot spring operated by the city. The event was covered by specialty channel TenGo, which is part of NHK, Japan's national broadcaster; and Oguni Shiro, an NHK producer and columnist who attended and reported the event for Forbes Japan.

During the day, bathing sessions were organized by three themes: how bathers outwardly present, regardless of their gender assigned at birth; according to the sex designated in their official government identification; and according to which sexuality they identify with.

The result was that participants were given the chance to explore and understand how transgender and non-binary people experience hot spring baths in Japan, where bathers must typically choose to bathe on either the “male” or “female” side of the bath. Throughout the day, Beppu locals got a chance to share the bath and develop relationships with members of the LGBT community invited to attend the event.

The goal of the day was for the group to come up with some ways to make group bathing in Japan more inclusive of people of all genders. According to Oguni Shiro, writing in Forbes, some ideas for making baths more LGBT-friendly included, rather than segregating the baths according to the binary “male” versus “female”, dividing bathers according to blood type (an important concept in Japan).

Other ideas included signage indicating a bathing facility as “LGBT friendly”, such as certain establishments in Japan are identified as “pet-friendly” or “tattoo friendly” (people with tattoos are generally barred from public baths in Japan). Another idea is that hot spring resorts should be proactively hiring members of the LGBT community to help to make bathing more inclusive.

Besides providing the opportunity for brainstorming ideas, the Furoject on May 1 also allowed some participants to partake in a quintessential Japanese pastime: taking a bath in public.

Interviewed by NHK, one participant and bather, a man who had undergone gender reassignment surgery, said that he generally could only go for a bath either very early in the morning or late in the evening, when there were fewer people in the bath who could observe him.

“(As a man who was assigned female gender at birth), when I had a bath on the men's side (at Furoject in Beppu on May 1), no one felt uncomfortable at all. This is the first time I've entered a communal bath in 13 years. It made me so happy!”

The entire NHK TenGo program about the event can be viewed on YouTube at this link (Japanese-only), while YouTube vlogger Kazue-chan also attended the event and made a video blog (also Japanese-only).