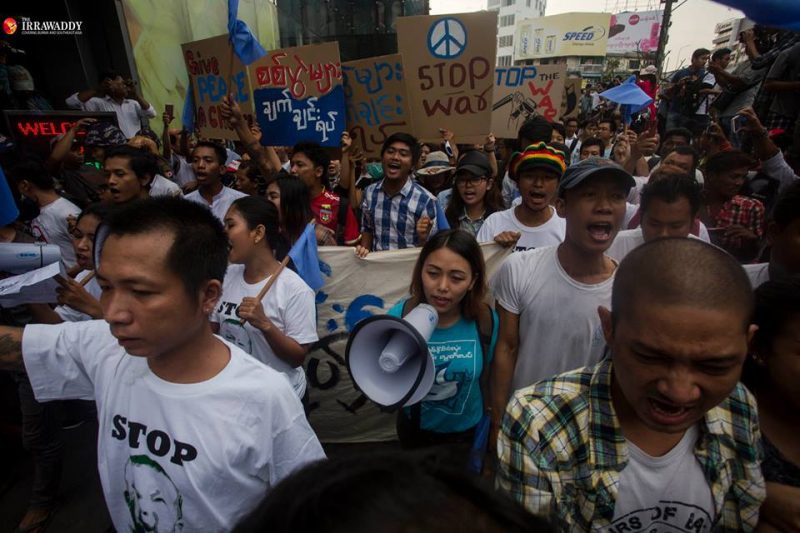 The peace march was organized to highlight the plight of residents displaced by ongoing clashes between government troops and armed ethnic groups. Photo by Aung Kyaw Htet. The Irrawaddy is a content partner of Global Voices.

A peace march in Yangon, Myanmar’s capital, was violently dispersed by the police and a group of ‘nationalist’ civilians on May 12, 2018.

The march, attended by almost 300 people, was organized by the Public Peace Movement Committee. It aimed to raise awareness about the plight of internally displaced people across the country as clashes continue to intensify between government troops and armed ethnic groups. The Myanmar government is currently negotiating peace with various armed ethnic groups which have been waging war for several decades already.

The police denied the organizers’ request to hold a rally at a busy intersection in Yangon, so they agreed to peacefully disperse. But according to activists, it was during this time when almost a hundred people wearing civilian clothes attacked the peace march, beating them and even arresting some of the participants, all under the watch of police.

Some journalists who were there at the rally identified the attackers as supporters of the army and the Association for the Protection of Race and Religion (Ma Ba Tha), a nationalist Buddhist group.

Nine members of the peace march were arrested by the police for violating the Peaceful Assembly and Peaceful Procession Law. They were released after posting bail on the same day. But the police said they will file more cases against 17 individuals for disturbing public order.

There’s no report if the police will charge the group of unruly ‘nationalists’.

Almost 400 civil society groups signed a statement condemning the violent dispersal of the peace march. They asked authorities to drop charges against the activists and “take actions on those who committed violent acts on protesters.”

AAPP calls on the Gov. to immediately release and drop all charges against protesters detained during the 12 May peaceful anti-war protest in Yangon. This is a clear and calculated attack on freedom of expression and right to assembly. #Burma #Myanmar

The embassies of Denmark and Sweden also issued separate statements urging the government to uphold the people’s right to peacefully assemble and express their opinion. 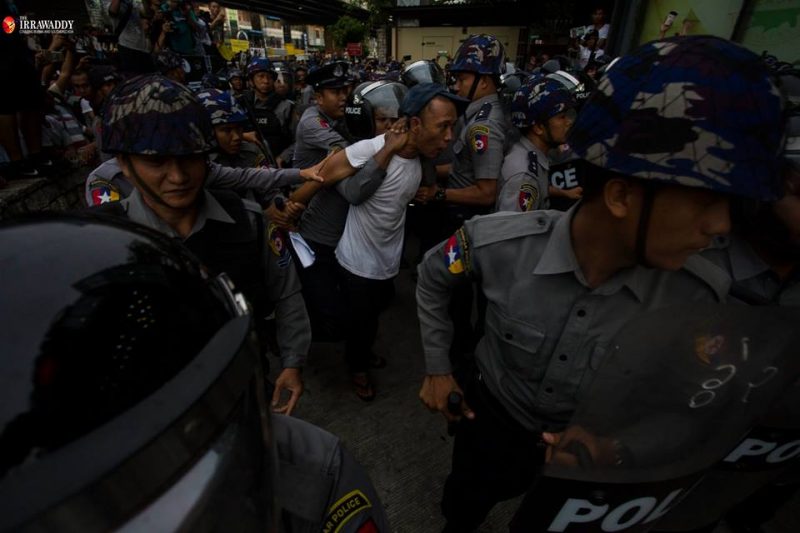 Nine activists were arrested during the peace march. Photo by Aung Kyaw Htet. The Irrawaddy is a content partner of Global Voices.

In an editorial, The Irrawaddy news website, which is a content partner of Global Voices, deplored the failure of the police to arrest the ‘nationalists’ who attacked the peace march:

We ask the authorities: Who were those self-proclaimed “citizens” and why did the police officers present turn a blind eye when they attacked? Apart from physically attacking the activists, these anonymous people cursed and threatened members of the media who were there to cover the protest. Again, the police simply ignored it.

Why do these thugs enjoy such impunity? Why did the police stand by and let all hell break loose? Did the police just decide to turn a blind eye because they were pro-military activists who were “countering” the anti-war protest?

Human rights groups also raised the alarm over the rising number of arrests made by the police against peace activists. Around 42 peace activists, including high schools students, had been slapped with various cases for participating in mass actions across the country in the month of May alone.

The protesters are planning to file a case against the police and the ‘nationalists’ who dispersed them on May 12.

For its part, the police denied that it hired civilian ‘thugs’ to arrest activists.