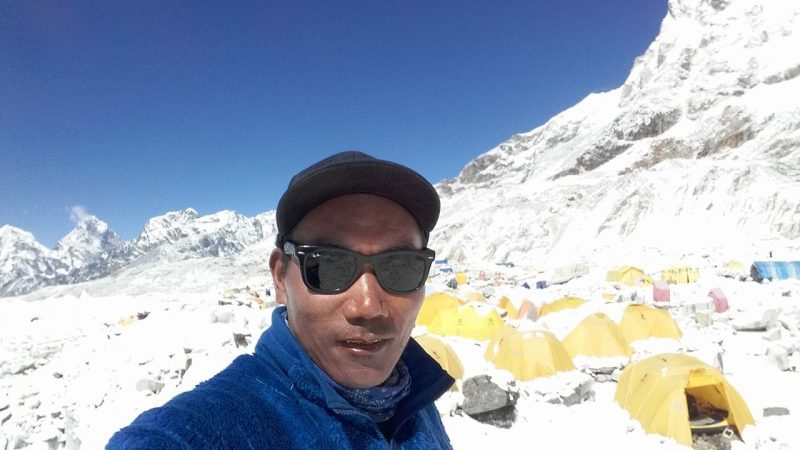 Kami Rita Sherpa, 48, has climbed Mount Everest the most number of times by any human in the world. Image used with permission.

Sherpa mountain guide Kami Rita Sherpa summited Mount Everest, the highest point on Earth, for the 22nd time, leaving behind Apa Sherpa and Furba Tashi Sherpa who have done it 21 times each. This is a world record.

Veteran guide Kami Rita started his summit push with nine other Chinese climbers on the night of Tuesday, May 15, 2018 and reached the summit by Wednesday morning, May 16.

This morning 8:30 AM Kami Rita Sherpa made 22 successful ascents of Mt. Everest as a part of Seven Summit Treks Everest Expedition!

Sherpa is the name of a Tibetan ethnic group who are native to the most mountainous regions of Nepal and who are highly skilled and experienced climbers. However, the term has come to be used by non-Nepali people to generally refer to guides or porters working in the Mount Everest area.

The job of a Sherpa guide includes preparing the route for climbers to follow, fix ropes in place, and carry the necessary climbing kit up the mountain. It's risky work, but can pay up to 6,000 US dollars a season, much more than the average income in Nepal. The government has made it mandatory for foreign climbers to hire guides.

Kami Rita is of the Sherpa people and hails from Thame village in Solukhumbu district. He climbed Everest for the first time in 1994, and while climbing the world’s highest peak is usually a once-in-a-lifetime ordeal for mountaineers and adrenaline junkies, it has been a ritual for him every year.

He worked for a long time as a professional guide for mountaineers for Alpine Ascents International, a Seattle-based commercial guiding company. Recently he joined Seven Summits Treks, one of a dozen Nepalese-run companies that regularly operate on Everest.

He has climbed most of the peaks above 8,000 meters in the Himalaya range, including K2, Cho-oyu, Lhoste and Annapurna, among others.

Before achieving his latest Everest record, he told me:

Summiting Everest? It's just like another daily chore. These days we've technology and weather forecasting service which has made climbing Everest much easier.

"Summiting Everest? It's just like another daily chore," says Kami Rita Sherpa, 21 times Everest summiteer. "These days we've technology and weather forecasting service which has made climbing Everest much easier." These days only those die who don't listen to their Sherpa guides. Otherwise, if you have will power and commitment, you too can do it! And Kami Rita is going to do it for the 22nd time. All the best Kami Rita, you're a legend! ——————– #everestsummit #everestsummiteer #kamiritasherpa #guinnessbookofrecords #willpower #courage #youcandoit #nepal #worldrecord #inspiration #meetingthelegend #instablogger #travelblogger #traveldiary #instalike #instapic #picoftheday

Kami Rita wasn't the only Nepali making news. Compatriot Lhakpa Sherpa climbed as well for the ninth time, the most for any woman in the world, breaking her own previous record.

The other prominent climbers of 2018 till now are Australian Steve Plain who completed the seven summits in a record 117 days and Chinese double amputee Xia Boyu.

However, Kami Rita doesn’t want his children to follow his path as a Sherpa guide, mainly because of the tragedies on the mountain in recent years. Many of the deceased in the 2014 and 2015 Mount Everest avalanches were local guides and porters, including Sherpas.

More than 4,000 people have summited Everest more than 7,000 times. And every year, the majestic mountain lures hundreds of aspirants challenging them to test their limits.