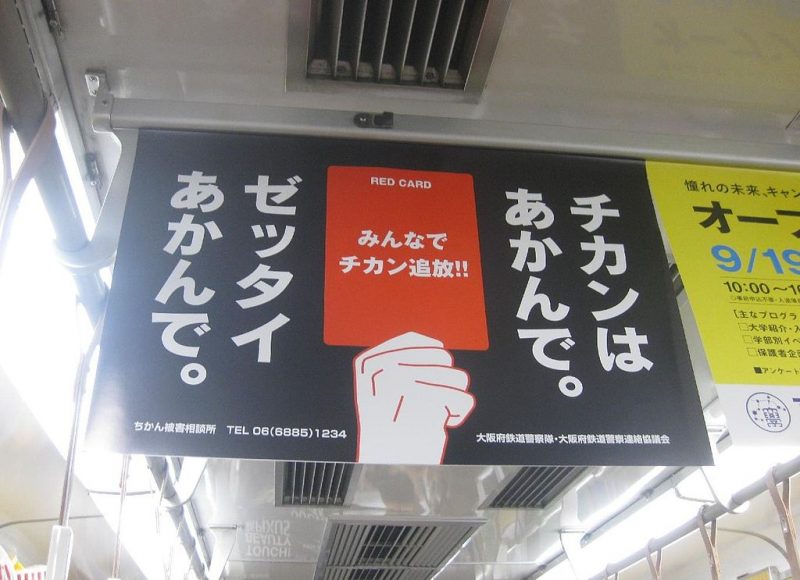 Poster: “Groping is out. Absolutely out. RED CARD. Let us all get rid of groping.” Poster uses Kansai dialect. Image by Wikimedia user Kyoww. Public domain.

A campaign in Japan aimed at high school girls provides special tin buttons for them to wear while riding the train to deter groping and other forms of sexual assault.

The Chikan Prevention Activities Center (痴漢抑止活動センター) organizes the campaign, which is in its third year. The word Japanese word “chikan” is used to describe both the act of groping as well as the gropers themselves.

The buttons feature a variety of messages that remind readers that chikan is a crime and that the wearer will not endure the assault quietly.

The aim of the “chikan deterrent button” is show how much [the people wearing it] hate chikan. It's an effort to make potential chikans to understand they must stop sexual harassment and sexual assault.

For women who commute by train, chikan is unfortunately common. According to the Japan Times:

Figures from the Metropolitan Police Department show that 1,750 cases of groping or molestation were reported in 2017, of which 30 percent occurred between 7 and 9 a.m. during the morning rush hour.

More than 50 percent of groping cases occurred on trains, the report says, with a further 20 percent occuring in train stations.

According to the same police reports, nearly 30 percent of groping victims were teenagers. Generally, incidents of groping are prosecuted by police under Section 176 of the penal code as “forcible indeceny” (強制わいせつ). However, it is often reported that such cases are difficult to prosecute.

While police and railway companies launch periodic campaigns aimed at stopping groping on trains, the messaging is generally aimed at helping women defend themselves or preventing groping in the first place, rather than trying to change male behavior. Commentary typically tries to determine what triggers such behavior, and there's also a strong focus in the media about how men can avoid or deal with false accusations of groping.

“I'm not going to put up with it! Sexual assault is a crime!”

Activist Matsunaga Yayoi, who represents the Chikan Deterrent Activity Center, says the idea for the buttons was first thought of by a high school student and her mother, who is Matsunaga's friend. Then in her first year of high school, the student had encountered chikan on a daily basis as she traveled to and from school:

“The perpetrators showed no signs of remorse at all. “I don't want to experience this ever again,” decided the girl. So, she created a card that read:

“I'm not going to put up with it! Sexual assault is a crime!”

The girl then pinned the card to her uniform, and took the train to school.

By 2015, Matsunaga reported the one-girl campaign had achieved some success on social media, and so the idea of creating tin buttons was born.

According to a 2016 Japan Times article:

Matsunaga started a crowdfunding project for the badges in November and managed to raise ¥2.12 million in just three months. To make sure the badges would attract young women, she collected 441 design ideas from 178 people and, ultimately, chose five. Matsunaga also established the Osaka-based Chikan Yokushi Katsudo Center (Groping Prevention Activities Center) in January to raise awareness over the issue.

The idea behind the button campaign is to empower the girls to call out assault and ensure that society sees chikan as something that's unacceptable:

The concept behind the buttons

[We wanted to ensure]:

Initially in 2015 the buttons were offered for sale over the internet at tarjk.com for 500 yen (about five US dollars).

They remain available there, but as awareness of the campaign has increased, the buttons are now sold at railway stations and in shops popular with high school girls.

Tweet: It doesn't matter how long or short our skirt is, or if we're wearing jeans — we always encounter chikan.

We want the idea that “you must have been doing something to attract a chikan” to stop!

Button text: I'm not going to take it! Groping is a crime!

Officially, sexual assaults, which includes groping, are on the decline. However, Matsunaga and the Center believe that many cases are simply not reported, skewing the numbers.

So, for Matsunaga and other activists, it's important to give young women tools they can use to deter unwanted sexual contact on the train.

Wearing the buttons does seem to help. Seventy students at Uruwa Senior High School, which participated in a campaign to provide female students with strategies to protect themselves from gropers, were surveyed in 2016 about the effectiveness of the buttons. A total of 1.4% said they probably don't work, 4.3% reported no change, 32.9% said “I felt the button worked” and 61.4% said they noticed a difference.

The button campaign has resonated in other ways as well. In 2016, just over a year after the project was launched, Matsunaga published on a Twitter account affiliated with the Chikan Prevention Activities Center a note sent by an adult woman:

Note: “I am a survivor. When I was a high school student I changed from going to school by bicycle to taking the train. I was really astonished when I started getting groped every day [on the train). There was no way for me to complain. While I regret what happened in the past, I just hope that fewer and fewer people will have this kind of experience. I sincerely hope more [girls] will be able to protect themselves!” -Mari, 39 years old

Tweet: “Mari, thank you for your note. I was also [groped by a chikan] when I was a child, and have never told anyone about it until now.

As an adult I've somehow been able to take action. I don't want any other children to experience what I went through.”