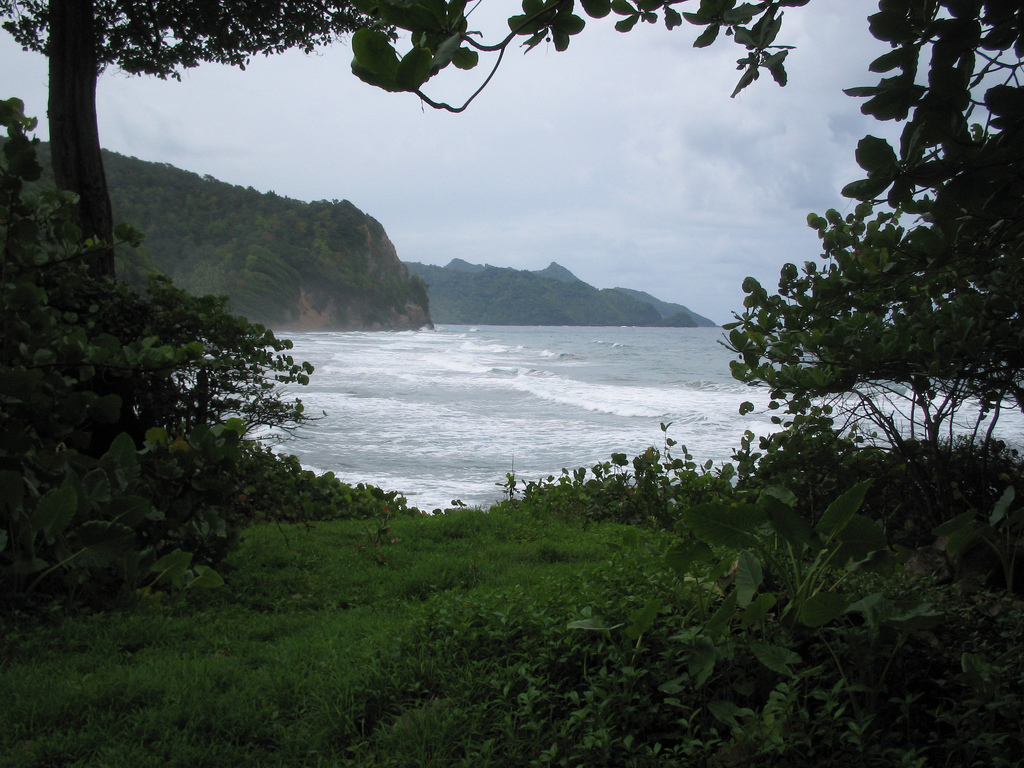 Dominica's lush east coast in may 2006, well before the devastation of Hurricane Maria in September 2017. Photo by janinephoto, used with permission.

In the midst of rebuilding efforts after Hurricane Maria devastated the country in September 2017, the Caribbean island of Dominica has named a new minister of Environment, Climate Resilience, Disaster Management and Urban Renewal.

While Joseph Isaac has set forth a number of goals to rebuild the country, relieve victims and better prepare for the next hurricane season, many on the island are still struggling to cope with Maria's lingering impact and concerns have been raised about a lack of communication and information over relief and support services.

Isaac took his oath of office on April 13, 2018, having made the controversial move to break loyalty with his opposition United Workers Party (UWP) and lead as an independent under the ruling Dominica Labour Party.

When Isaac announced his departure from the UWP, he explained that Dominica comes first and all other things are secondary. In his new position as an independent member of parliament, Isaac has outlined a number of goals for the nation.

According to a press release on the Office of the Prime Minister's website, Isaac and his team hopes to address “key deliverables” as early as June 1, 2018. They include looking at the current housing situation in the country, stimulating the private sector, rehabilitating forests and more.

Isaac will be working to push legislation by the Climate Resilient Execution Agency for Dominica (CREAD) launched last month. He also intends to harvest and use fallen trees for housing and furniture, reiterating that housing is crucial — especially with a new hurricane season imminent. Additionally, the new minister will address the issue of cleanliness and garbage disposal in the capital, Roseau.

During his swearing-in ceremony, Isaac said:

Our focus will be first of all on housing, and I was talking about Roseau Central, housing in the city and also nationally to ensure that we can meet our resilient targets and to ensure that people are protected from the elements.

Wonderful. We must also get rid of the hazardous chemicals that our farmers use on their farms. We have fertile land enough to be an ORGANIC FARMING NATION. MARIA cleaned us up, let's stay that way.

The agricultural sector was essentially eliminated. The once-lush tropical island was effectively reduced to an immense field of debris. In a Facebook post just after the hurricane hit, Dominica’s Prime Minister, Roosevelt Skerrit, described the damage as ‘mind-boggling’. The roofs of the majority of buildings and homes were either damaged or blown off. There was extensive damage to roads. Power, phone, and internet service was cut off, leaving the country almost incommunicado with the outside world.

Dominica has received both monetary and volunteer support after Hurricane Maria. The World Bank recently promised the island nation US $17 million for a geothermal plant. They also approved US $65 million for restoring agriculture, housing and more:

The Emergency Agricultural Livelihoods and Climate Resilience project (US $25 million) will help farmers and fisherfolks to restore their agriculture and fishing production and systems, and adopt climate smart practices. The Housing Recovery project (US $40 million) will focus on rebuilding houses and improving the application of resilient building practices. The total $65 million project financing for these two projects includes the US $50 million of grant financing.

Prime Minister Roosevelt Skerrit posted the story of one woman who was gifted a home from the government. According to the post, the woman lost her mother, brother, two sisters, as well as her sisters’ children to Hurricane Maria. Netizens praised the prime minister and agreed the story was a touching one, with many suggesting the next step should be ensuring that the woman can financially support herself.

There are many stories like this one, very sad. I am very happy that she was able to secure Housing from the Government. The goal however, should be to make sure when housing is provided that she does not have to depend on the Government to continue taking care of her. There has to be a path to self Reliance.

Questions arise over where hurricane relief funds are channeled

Despite the success stories, social media users have expressed concerns about Dominica's progress since the hurricane struck. In response to a Dominica News Online article discussing World Bank funds, commenter Ibo France raised concerns about where and how relief funds get channeled to the right places after a disaster strikes:

Dominica has received a lot of assistance in cash and kind from donor countries, organizations and institutions. That’s very good. Implementation of the climate resilient plans are moving at a snail’s pace. Still, too many damaged roofs of houses and public buildings, roads, bridges , tracks and pathways. With the reconstruction of houses, buildings and roads, the revitalization of the farming and fishing sectors, the sprouting of new and better businesses and services, the economy should be red hot. Instead the donations are been used for electioneering.

While the commenter's accusation of misuse of funds doesn't appear to be supported by any publicly available evidence, nor has any reputable figure or organisation made such an accusation, many Dominicans say the aid and information they have received is insufficient. Ground Truth Solutions, an international non-governmental organisation focusing on post-disaster accountability, conducted a survey of nearly 400 Dominicans after Hurricane Maria struck. In its fourth round of surveys since the natural disaster, 95 percent of respondents whose homes were completely destroyed said their needs for “financial or material support for rebuilding homes and businesses” were not adequately addressed.

When asked if people are better prepared to face another natural disaster, 44 percent responded “not at all,” 23 percent said “not very much,” 18 percent answered “mostly yes,” and only 2 percent said “completely.”

The clearest message from the survey is the urgent need to step up information provision and engagement — not just consultation — with affected communities. At present, too many people on the island lack information about what they can expect from the recovery programme and when ‘building back better’ [a slogan coined after the natural disaster] will begin to make a difference in their lives.