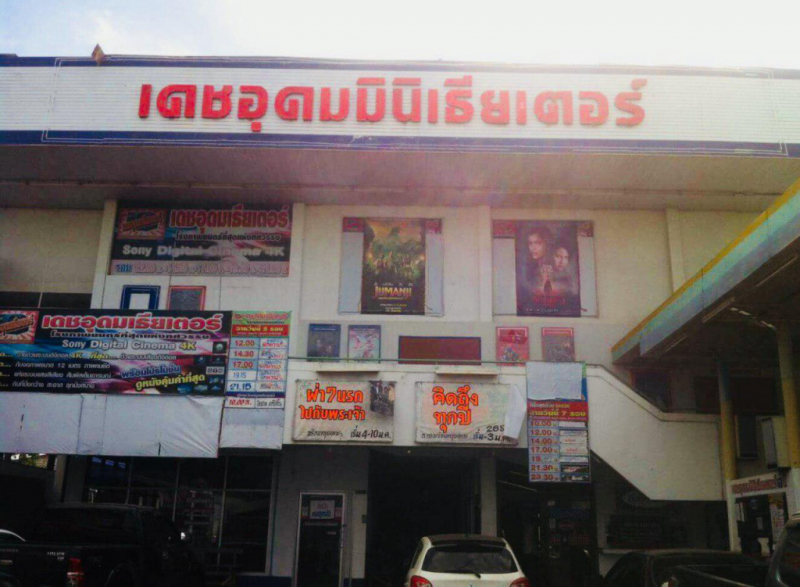 The Det Udom Theater has gone through several changes in its six-decade-long history.

This edited article by Jirasuda Saisom is from The Isaan Record, an independent news site in Thailand, and is republished on Global Voices as part of a content-sharing agreement.

A wave of chain movie theaters hosted in shopping malls has swept away most of the independent movie parlors once found in almost every city of Thailand's northeast. But in the region’s smaller towns, stand-alone cinemas like the Det Udom Theater in Ubon Ratchathani Province continue to draw a loyal audience.

Located in the town of Det Udom, about 30 kilometers southeast of Ubon Ratchathani City, the family-run theater has been operating for almost 60 years. Its original wooden theater hall was built in 1959, even before Thailand’s movie theater construction boom took off in the mid-1960s.

The Isaan Record talked to Kittiphong Thiamsuvan, the owner of the Det Udom Theater and a former member of parliament, about the theater’s history and how it survived the competition from large cinema chains.

Can you tell us about the history of the theater?

The movie theater opened its doors in 1959. It was originally named Det Udom Movie Theater. In 1987, I took over the management from my father and changed the name to Det Udom Mini Theater. As we adopted digital movie screening in 2013, we took on a new name again: the Det Udom Theater.

The original movie theater was a wooden structure with corrugated steel walls. The screening halls hosted 800 seats on two floors. There was also a stage for music performances. Back then in 1959, tickets sold for one baht.

In 1997, we demolished the old theater and build a new concrete one with two screening halls. Each hall has 170 seats and tickets used to sell for 30 to 40 baht.

Back when admission was still one baht, we had about 100 to 500 viewers per screening. Around 1987, the average numbers were even higher but today we don’t get more than 100 people for each screening.

Why have the numbers of cinema goers dropped in recent years?

The economic situation is not good, and the government hasn’t been encouraging people to visit movie theaters. For example, in the past, the government offered free screenings like the King Naresuan movies and films about Buddha. Whether they offer free screening or not always depends on the ideas of the government leaders of each period. 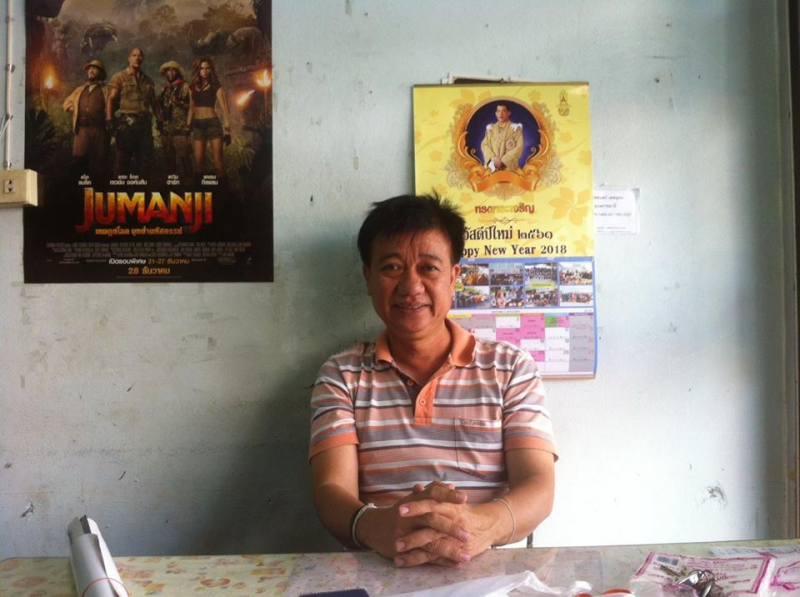 Kittiphong Thiamsuvan inherited the family-business from his father, and took over the management in 1987.

How have you managed to survive amid the competition of large chain cinema companies?

We have been around for 59 years, people know us and we are in a good location. We are the only movie theater in Udom Det District. The next theater is 54 kilometers away; it’s one of the Major Cineplex theaters in a mall.

We have always been adapting to people’s changing tastes. That’s why we redesigned the theater three times. Our business is family-run and our employees are mostly relatives. They can take on different duties at the same time so we don’t have to hire many employees. That’s very economical and we almost don’t have any hiring expenses.

How do you advertise your theater and the movies you screen?

We use advertising boards made of wood and painted with watercolors because they are reusable. Once you’re done with one movie, you can just paint over it for the next one. We don’t like these vinyl banners because they are expensive and get tossed away after. We can’t reuse them. But for very popular movies like Pee Mak Phra Kanong,we do print vinyl advertising banners.

Apart from that, we have trucks driving around with advertising boards and loudspeakers promoting our movies in the villages nearby.

Are you thinking about who will take over the theater after you?

Oh, I don’t think about it. Because when the time comes, the good deeds I have done will show their effect. I graduated from the Faculty of Agriculture at Kasetsart University, and I have been helping people without asking for any compensation.

The land here is worth almost 100 million baht. If we want to develop it further, we could build a new movie theater. It wouldn’t be difficult, and we could possibly use it for another 70 years when the next generation takes over.

But the old cinema still has value, although it wouldn’t sell for much. If you ask if it still is of any benefit: Of course it is! It’s just that Thailand doesn’t care much about old things.