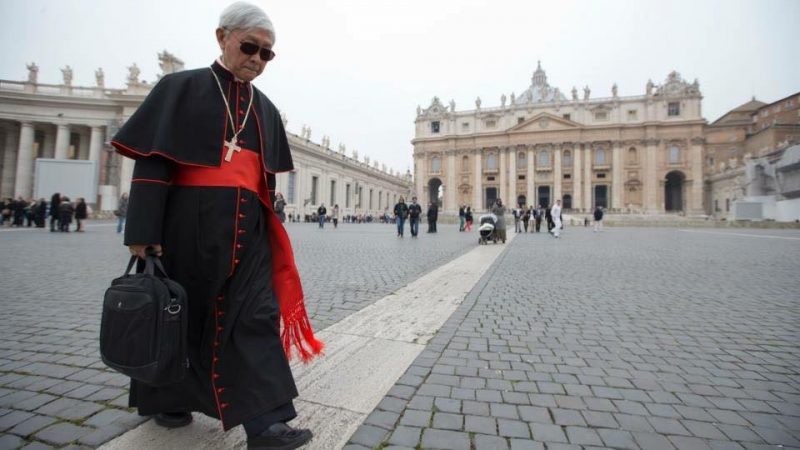 The Vatican and Beijing are reportedly at the final stage of reaching a historic deal on the appointment of bishops in China. The agreement would lead to the resumption of diplomatic ties, which have been suspended for almost 70 years.

However, many have spoken out against rapprochement. Hong Kong's Cardinal Joseph Zen is the most vocal Catholic leader protesting against the deal.

Journalist Kris Cheng interviewed Cardinal Zen for a piece published on May 13, 2018 in Hong Kong Free Press. An edited version is republished on Global Voices as part of a partnership agreement.

Hong Kong's Cardinal Joseph Zen, 86, is continuing a one-man fight inside the Catholic establishment to oppose a potential deal between the Vatican and China over who can appoint bishops in the officially atheist country.

The agreement between the Vatican and Beijing was reportedly in its final stages in March, though Zen, who is officially an emeritus bishop, has called it a “deal with the devil” and a “complete sellout.” Perhaps in part because of his efforts, the critical voices he inspired, and the ever-harsher suppression of religion in China, the Vatican now says the deal — while still in the works — is not going to be finalized anytime soon.

“I know China. I know the church in China,” Zen, who was born in Shanghai to Catholic parents, said in an interview with Hong Kong Free Press from his home at the Salesian House of Studies on a Hong Kong hillside. “I have worked seven years, spending six months a year from 1989 to 1996 in [government-recognised churches] teaching the seminaries”:

I met so many people, people of the government, people of the church, so I really know the situation. I see how the church is being persecuted, and the bishops are being humiliated. I think nobody else has had such experience.

The Holy See, located in Vatican City, is the top governing body of the Catholic Church and appoints bishops worldwide. However, religions are only allowed to operate in China if under state supervision, so the official Chinese Patriotic Catholic Association rejects the Vatican's authority and chooses its own bishops for the country's 10 million Catholics. An unofficial underground church remains loyal to the Vatican.

The Vatican severed diplomatic relations with China in 1951 over the issue not long after the communist forces claimed victory over the Kuomintang in the Chinese civil war. It does, however, maintain ties with Taiwan, where the Kuomintang forces fled after defeat.

In 2015, it relaunched negotiations with Beijing. Under the proposed deal, the Vatican may make a major compromise to recognise a handful of bishops endorsed by Beijing, including seven who had been excommunicated by the Vatican.

But Zen said that, according to his knowledge, both the Vatican and China have encountered difficulties in reaching the final agreement:

Some are saying maybe now there are difficulties on the Chinese side, because there are people who think that they don't need the agreement, they can control everything. Maybe there are voices in China against the eventual agreement.

You see that there are many actions on the side of the government which show that they are tightening control on religion. And so it's more difficult to understand how the Vatican can come to a deal at this moment […] Any agreement on the side of the Vatican may be seen as collaboration with the government to persecute our own people; that’s terrible.

For instance, new regulations on religious affairs were installed on February 1, 2018, under which minors are banned from entering places of worship.

The cardinal said China's recent amendments to the constitution, such as the removal of the presidential term limit, may also have influenced how the Vatican looked at the issue:

Surely they should take into account also these new things – which are not encouraging any agreement. I really hope that a miracle may happen, the Pope may say we need more time to be more cautious, to consider again. No deal is better than a bad deal.

In January, Zen travelled to Rome to personally give Pope Francis a letter from 88-year-old persecuted Chinese Bishop Peter Zhuang Jianjian of Shantou. Zhuang, a priest loyal to the Vatican but not recognised by China, was one of two bishops asked by the Vatican to step aside for priests excommunicated by the Vatican but accepted by Beijing:

I told him everything. I wrote so many letters. My last letter was very clear, I have the impression that the Pope now is aware of the worries in the church in China, so I don't think I need to see him again or say more things. Maybe now there are some other things which may make the Holy Father more aware that he is not receiving good information from people around him.

“Faith should be the first thing in their mind”

Zen has been in a war of words with the Vatican's secretary of state, Cardinal Pietro Parolin, who he said was considering the potential deal like a diplomat, but not from religious standpoints:

I can understand that Pope Francis may not be well informed about the real situation in the church in China, because he comes from South America. But these people like Parolin, they must know very well the situation, so I really cannot understand how are they so enthusiastic to push for a deal, so they may have a wrong objective.

Because from the point of view of Catholic faith, they are not going to achieve anything. Maybe they are more interested in diplomatic success. That's very sad, because they are the collaborators of the Pope, the faith should be the first thing in their mind.

It's very scary. These people – they should understand a lot of things, why do they do this? They are not naive, they are evil.

Zen has found himself with fewer and fewer allies in the Vatican. Savio Hon, a top Hong Kong priest with similar views to Zen against the China deal, used to be in Rome and had direct access to the Pope, but in 2017 was sent to Greece as the Vatican’s representative, despite the fact that he never served in the diplomatic service. Some considered it a punishment.

Cardinal Fernando Filoni, another top priest who worked many years in Hong Kong caring for the church in China, was also cautious of the China deal. But he too was another ally lost, gradually switching towards Parolin's side.

Among the bishops that Beijing reportedly asked the Vatican to recognise, Bishop Joseph Liu Xinhong of Anhui and Bishop Paul Lei Shiyin of Sichuan were two who have children with their girlfriends. It was a violation to the law of celibacy that only unmarried men without children can be priests. Zen called it “ridiculous” that officials in the Vatican claim there isn't hard evidence of that fact.

Zen recalled another case of a Chinese priest who did not observe the law of celibacy, but the Chinese wanted the bishop – who Zen did not name – to be recognised. He said the Vatican conducted an investigation, but the investigator simply reported back the priest's denial. “They just want to cheat themselves,” Zen commented.

“With a really totalitarian regime, you have only your spiritual strength”

China’s situation is often compared to that in Vietnam – another deal brokered by Parolin. In Vietnam, the Holy See proposes a list of bishops to the Hanoi government, and Hanoi makes its choice, before the Pope appoints them.

But Zen said Vietnam has a strong base of Catholic followers, and the government cannot interfere in the church.

“I think that one thing that the Pope may have difficulty to understand is that, with a really totalitarian regime, you have only your spiritual strength,” Zen said.

Zen also said China's case is very different from those of Hungary, Poland and the then-Czechoslovakia, where they have a long history of faith:

Zen said he fears a dela with China may disappoint Catholics in China – both those in “underground” churches and those in government-recognised ones — and lead to serious consequences:

I am very much afraid that some may have some irrational reaction, like a kind of rebellion against the Pope, that would be very unfortunate – I am against any kind of such rebellion. I think that fidelity to the Pope is our bottom line; even if we cannot understand what the Pope is doing, we must obey.

Zen said he believes that it is key for more people to speak up about China's suppression of religious freedom and about the China deal:

Our voice is weak, their voice is strong, it will be good to raise concerns of more people.