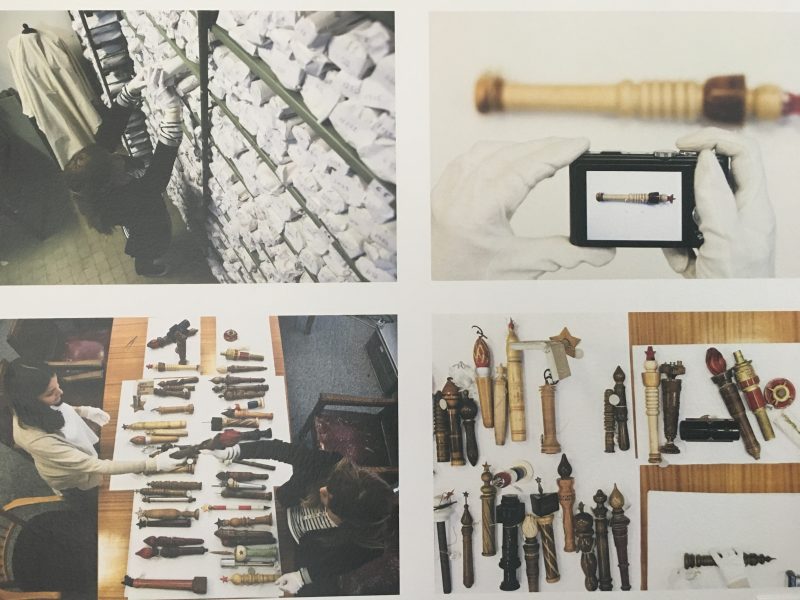 Some objects have been preserved. These baton holders, from the Relay of Youth in Yugoslavia, are now on display beside the mausoleum of Josip Broz Tito, in Belgrade. Photo by Ellery Biddle, used with permission.

Serbian art historian Živko Brković has been targeted with threats, which he related to a spate of physical attacks and a burglary — all due to his effort to preserve Serbian artworks of the past.

For many years, Brković has demanded answers from the current Serbian government regarding the alleged mishandling of state-owned artworks. Brković wants to hold Serbia accountable for ‘privatized’ or ‘disappeared’ museum collections in the 1990s under former Serbian president Slobodan Milošević.

Newspaper Danas published an account of pressures faced by Brković who received late-night phone calls to “stop mentioning [Serbian President] Vučić” after he published an open letter about the mishandling of state properties, including converting museums into residences of state officials.

After he reported the incidents to the police, the only help they provided was advice to change his phone number:

Tweet: Threats against art historian Živko Brković, author of the book “Šumanović i naša fašizofrenija“, because of texts published in “Danas”.
Link: Under attack for criticizing the regime.

Brković was assaulted after the promotion of his critical book Šumanović i naša fašizofrenija (Šumanović and our Fascisophrenia) at the Belgrade Book Fair in October. His personal library, which he kept at his brother’s house, has been burglarized, and many unsold copies of the book have been destroyed by unknown perpetrators.

In Brković's opinion, his big “sin” was that he kept reminding the Serbian public about the mishandling of its cultural heritage, owned by the state and inherited by former Yugoslavia. During Milošević's reign, a museum complex in the area of Dedinje was converted into residences for his family. The three museums in the area contained thousands of priceless historical artifacts, both from the country and gifted to the Yugoslav president Josip Broz Tito by governments of other countries.

After Milošević's fall in October 2000, an exhibition of photographs of 500 so-called “lost” works of art put on by the democratic government that briefly held power. However, after the assassination of progressive Prime Minister Zoran Đinđić in 2003, Milošević’s cronies crept back into positions of power and the repression of cultural heritage continued.

In a statement for Danas newspaper, Brković emphasizes that current president Vučić was the minister of information in Milošević’s government and that his close associates and political allies also held high government posts:

I am above all an expert who loves his work, and I can’t keep silent about robbery of artworks in plain view of the public. My conscience doesn’t allow me to shut up. Crucial questions are avoided, about the inventory of artifacts in the [former museum] Villa “Mir” (Peace), how many there were, and where the artifacts disappeared to. Nobody mentions its library, which contained the manuscript of Gorski vijenac which left for Cetinje.

Brković added that the responsible people who are now in power “must be sued in domestic and then international courts.”

In a text titled [Mr.] Vučić, give us back our museum, Brković noted:

Now you use the villa for peacockery, strutting and enjoyment with your guests, separated from the possible necrophiliac odor from the nearby mausoleum. You don’t seem to care where in the world is the monumental ancient mosaic with hunting scenes, the sphinx from Egypt, the bronze helmet from the 7th century BCE – all the presents from the rulers of Greece, Egypt, Nepal, Russia… The former museum has been kidnapped, walled off, and the mystery of disappeared artifacts remains unsolved. Let me remind you that construction of private buildings used to be forbidden in the area of Dedinje, however suddenly it was allowed for the privileged businessmen and politicians. Among the first to benefit from this government decision was [war criminal and organized crime figure] Arkan Ražnjatović, whose 7-8 story mansion in its style and eclecticism copies the megalomaniac fascist buildings of Mussolini.

Populism ‘as usual’, with long-term consequences

Brković's case is just one instance among many to suffocate free thought in Serbia, where a fragile democracy has been swayed by populism. Serbia is among many countries in Eastern and Central Europe run by right-wing parties affiliated with the European People’s Party (EPP) and benefits from the influence of conservative Hungarian ally Fidesz-Hungarian Civic Alliance.

Instead of preserving actual heritage, such governments often invest in creating a revisionist version of history, creating new artifacts presented as the priority.

For instance, in neighboring Macedonia, Vučić’s EPP counterpart Nikola Gruevski (2006-2017) spent hundreds of millions of dollars of Macedonian taxpayers’ money to enforce a policy of “antiquitization”, aimed at proving direct cultural, political and genetic “descent” from the empire of Alexander the Great (336–323 BCE).

This revisionist policy of “national rebirth” included corruption-riddled projects that provided huge kickbacks for ruling party officials and affiliated oligarchs. It comprised public spending on hundreds of new monuments and buildings through the Skopje 2014 project, filming dozens of ideologically biased ‘documentaries’ through the Macedonian Public Broadcasting Service, and establishing almost total control of the academic community.

Similar to the announcement of Skopje 2014 plan in 2009, the one about a new complex in Belgrade presented a 3D model of the plan:

We are getting–or maybe I should not mention it outright–we are bying a new monument… monument to Stefan Nemanja.

Some social media users have raised concerns, pointing to similarities in approach between the current Serbian and former Macedonian regime:

Have you seen the future monument to Stefan Nemanja? Have you been to Skopje?
Macedonian Special Prosecution Office is conducting several investigations against Gruevski – but that won't repair Skopje which he turned into a city of kitsch. This would happen to Belgrade too unless investigations start before the construction.

Serbian authorities also plan numerous other public works such as fountains and a panoramic wheel (a now-halted part of Skopje 2014 plan with a cost of about 20 million Euros or 23 million USD).

In Belgrade they plan building fountains, panoramic wheel, gondola, open air gyms, entertainment complexes. Just like in Ancient Rome, give the plebs some bread and circuses.

In 2017, Macedonia managed to shake off its the Russia-supported populist regime, after a severe political crisis but is still reeling from the divisive consequences of their rule. Meanwhile, in Serbia, Vučić juggles its traditional affiliation with Russia against the prospect of joining the European Union, favored by youth and the urban population.

Vučić’s recent victory in Belgrade local elections further consolidated his power. This resulted in a new wave of pessimism and even apathy among the remaining representatives of the free press and civil society in Serbia.

The case of art historian Živko Brković shows that some public interest issues have been unofficially declared taboo topics, in particular, those related to demands of accountability from an increasingly authoritarian government.