Volunteers with the list “Kollouna Watani” waiting for the results at their headquarters. Sunday, May 6, 2018. Photo by the author.

On Sunday, May 6, 2018, Lebanese citizens residing in Lebanon voted for a new parliament in their first elections since 2009. The election saw a low turn out (49.2 percent), clashes between parties during and after election day, and thousands of electoral fraud allegations.

Lebanese citizens were supposed to vote in 2013 [1], but the Lebanese parliament controversially extended its own term three times since 2009, citing the ‘security situation’ (referring to the war in neighboring Syria), before creating a new electoral law to inform the 2018 elections.

The new electoral law is based on proportionality and religious representation which means that seats are equally divided between Muslims and Christians in religiously-diverse Lebanon.

According to proponents, this would encourage democratic participation, although the fewer-than-50% turnout left many wondering how well that worked out.

LADE (Lebanese Association for Democratic Elections) recorded thousands of election violations, including dozens of cases where volunteers from parties were standing behind the voting booths [2] while voters were casting their ballots, in clear violation of the right to a private vote.

Another video allegedly shows votes being moved out from ballot boxes into an unknown location [3], under the watchful eyes of a soldier. In Tripoli, Northern Lebanon, a responsible in the Future Movement was filmed [4] giving money to party followers, leading to suspicions he was rewarding voters with cash.

Additionally, LADE reported [5] 222 cases of intimidation or coercion on electors inside or next to the poll centers, 11 cases of bought-out votes, and 34 cases of violence inside and next to poll centers.

The Lebanese Transparency Association (LTA), the local chapter of Transparency International (TI), noted conflicts of interest [6] due to the fact that candidates include 16 ministers of the current Lebanese cabinet. These include the Minister of Interior and Municipalities, who is directly involved in managing the electoral process.

call on the government of Lebanon to significantly improve transparency around campaign financing and regulations, including communicating about relevant spending ceilings for each district, publishing financial reports and account information from candidates running for office and making the voting results from every polling station publicly available. Furthermore, LTA calls on the government of Lebanon to prohibit incumbent government ministers from running for future Parliamentary elections.

The Ministry of Interior was late in publishing all the results, including ballots of losing candidates. The final results were posted on the ministry's website on Friday, May 11, five days after the election.

This created confusion for some coalitions, such as the Kollouna Watani (KW) list, one of the lists representing what is called ‘civil society’ in Lebanon, a diverse group of people not linked to ruling sectarian parties. 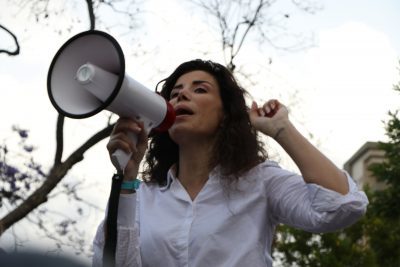 Joumana Haddad, a parliamentary candidate, is addressing a protest contesting the results of the election in Beirut's First District. Photo by the author.

Joumana Haddad, a candidate with KW running in Beirut's first district for the “minorities seat”, announced her victory [7] after KW and other representatives in other parties preliminary counted the votes and announced that she had won the seat.

But the morning after, when the official results were still not out, another candidate was announced as the winner following a secondary counting process.

According to Kollouna Watani representatives, delegates were removed [8] from a room where ballots were being counted due to an unspecified technical error.

Eyewitness from @kollounawatani_ [9] confirms what's already spreading on social media; namely, it was acknowledged they had two seats in #Beirut [10], until an ‘IT problem’ arose, their delegates were kicked out the room, and when they came back @JHaddadOfficial [11] no longer had a seat 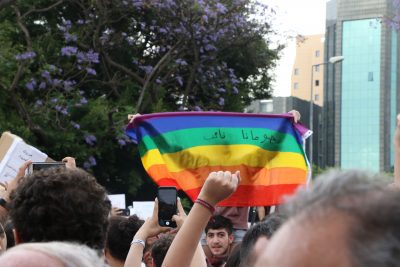 Protester holds a rainbow flag with “Joumana is an MP” written on it. Joumana Haddad is openly pro-LGBTQ+ rights. Photo by the author.

Nearly 1,000 people protested in front of the Ministry of Interior the next day, Monday, May 7, contesting the results and protesting against the thousands of violations.

Some held signs reading ‘Joumana is an MP’. The protest turned into a sit-in and blocked one of the main roads in Beirut, which connects Beirut's first district to the second, for hours before ending peacefully.

A day after the protest, Haddad announced on her Facebook page [14] that she intends to appeal the official results.

Despite the strong presence of military and the Internal Security Forces, some clashes and disputes happened throughout the country.

In Beirut, supporters of Hassan Nasrallah's Hezbollah and Saad Hariri's Future Movement clashed [15], with both yelling sectarian slogans at each other. In Zahle, in eastern Lebanon, Samir Geagea's Lebanese Forces followers attacked volunteers with the independent [16] candidates. In Bint Jbeil, a city in southern Lebanon, representatives of Kollouna Watani also reported being harassed [17] by members of dominant parties.

This extended to nominally allied parties. In Nabatieh, followers of Nabih Berri's Amal Movement party followers attacked a convoy [18] of the Lebanese Communist Party. The two parties are technically allies.

Tensions grew higher the day after the election. Riders on scooters carrying Hezbollah and Amal movement flags celebrated by touring [19] some neighborhoods where their presence is minimal, neighborhoods known for having many supporters of the Future Movement.

They chanted sectarian slogans such as “Beirut is now Shia”, as Hezbollah candidates were also elected in Beirut's second district, traditionally a bastion for the Future Movement led by Hariri, a Sunni Muslim and current prime minister. They were also filmed [20] putting a Hezbollah flag on the statue of Rafik Hariri, the former prime minister (and current prime minister's father), near the site of his assassination. This was seen as highly provocative as Hariri was a vocal opponent of the Syrian regime, which Hezbollah and Amal support.

Retaliation soon followed these convoys and supporters from opposing parties (notably the Future Movement) attacked the group [21]. These small clashes turned into chaos with some sporadic gunfire but the army, on high alert, intervened [22] and calm was soon restored in Beirut.