Over 100,000 Melburnians march to #ChangetheRules for job security and better wages 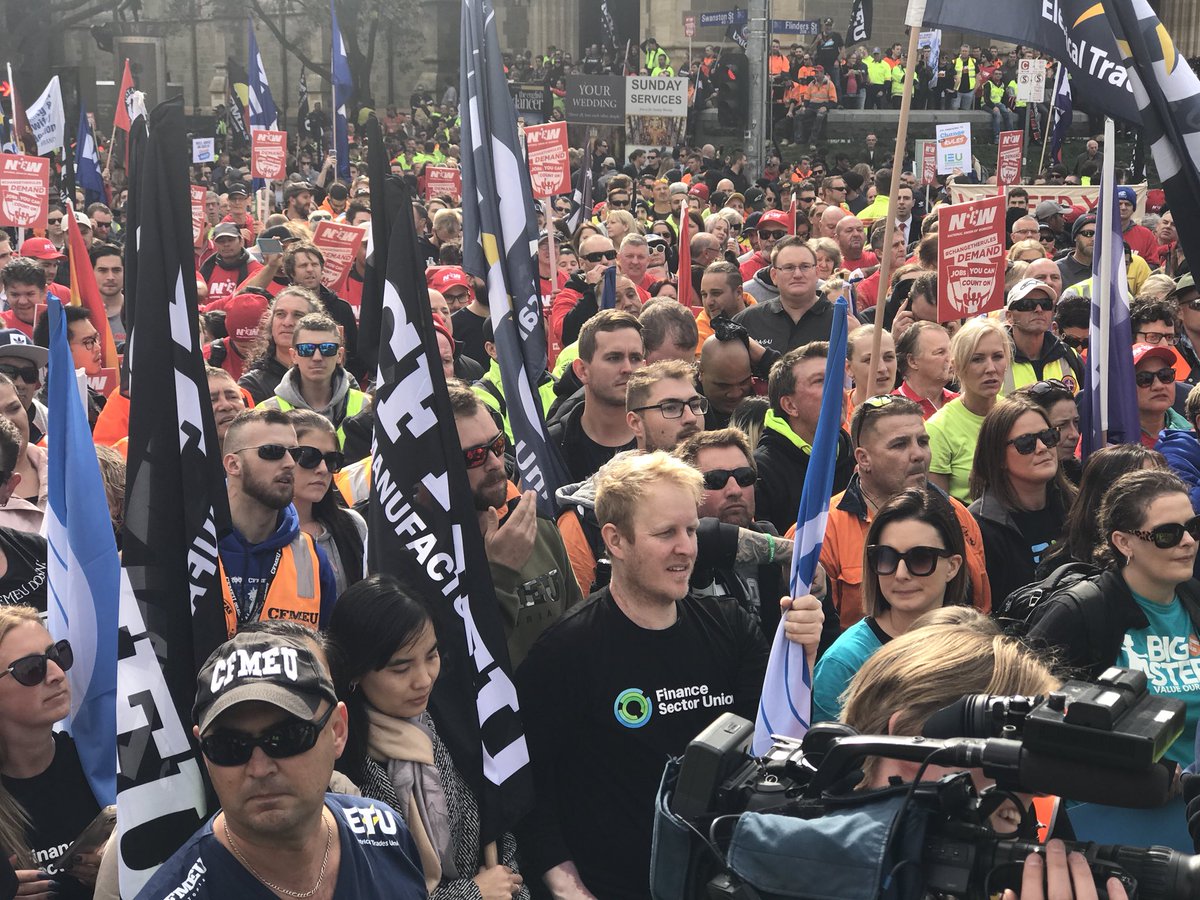 On May 9, 2018, over 100,000 workers and their supporters marched in Melbourne, Australia for more secure jobs and better pay. The rally was part of the Change the Rules campaign, organised by the Australian Council of Trade Unions (ACTU).

The event trended strongly on social media and also appeared in Twitter Moments.

The campaign has emerged in the context of increasingly insecure work, stagnant wages and attacks on wages and conditions. It reflects concerns about growing inequality, the increasing power of big business and revelations that a third of large corporations are not paying any tax.

The union movement also believes that the industrial relations system in Australia is broken and needs a major overhaul. In recent years, union members have faced severe restrictions on the right to take industrial action and the right to strike.

A particular grievance has been the loss of Sunday penalty rates for retail, hospitality and related workers. Penalty rates are higher rates of pay for working at certain times such as weekends, public holidays or extra hours. Sunday pay rates were reduced in 2017 by the Fair Work Commission, the authority responsible for industrial relations.

The new voice behind strong union leadership in Australia

Much of the credit for the campaign goes to the high profile and controversial leader Sally McManus who became the Secretary of the ACTU in March 2017.

When McManus announced that it can be appropriate to break an unjust law, she captured media attention and gained some admirers from her stance:

#SallyMcManus is to be admired for honestly saying a law should be broken if is unjust #auspol #abc730 #thoreau #qoute #ethics #actu pic.twitter.com/SZnhamwcdj

No wonder workers won't join unions now when Sally McManus says it's ok to break any law you don't like. ACTU is just one big bikie gang.

The fall in blue-collar worker numbers had not been matched by the increase in white-collar and professional members. Professor Bradley Bowden explained:

Part of the problem in securing new members for unions is that professional recruitment is largely confined to one cohort: those employed in publicly-funded or regulated industries, such as education and health. In these areas, unions still represent around a third of the workforce.

There has been an upturn in membership since McManus took on the leadership position. Her leadership has received support from progressive websites. In November 2017, the Independent Australia journal discussed her role following the campaign launch:

Editor of The Pen, a voice for ordinary people seeking change, reflected on the political implications of the rally, especially for the conservative Federal government:

A turnout of this size is a big blow to Malcolm Turnbull and his government. Nothing could make it clearer that public opinion is shifting decidedly against them, and this is likely to cast a shadow on any sympathy the government might have got from yesterday’s budget.

The Twitter hashtag #ChangeTheRules attracted many who agreed with this.

McManus described a feeling certainly reflected in the celebratory crowd:

this wonderful feeling of togetherness. This is a feeling of union all around, you know, just all the people who feel the same, who want fairness, all prepared to fight for it.

Union members on Twitter proclaimed their pride in the rally:

Proud to be part the rally with my @ASUnion workplace. As a part time worker as well as a freelancer I know the difference working in a unionised industry or not and I'm sick of getting ripped off #changetherules https://t.co/Dy3eH3FIgK

I've been to rallies that felt like a funeral march. But this was powerful. Every one of the 120,000 ppl on Melbourne's streets today is fired up & ready to #ChangeTheRules! pic.twitter.com/BKn0gaxXJV

‘Change the Rules’ events are continuing around the nation.